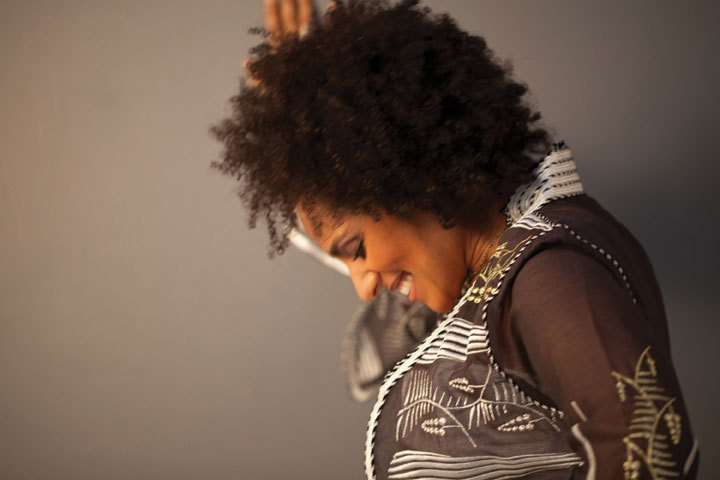 The operative prefix in describing Malika Zarra is multi-: A multilingual, multi-octave vocalist fronting a multinational cast of musicians and drawing from multicultural influences, Zarra has crafted a sophomore recording that offers multiple delights. Born in Morocco, she grew up in France and now resides in New York. Like many expats, she initially eschewed her roots and soaked up new influences as she moved around, only to rediscover her cultural core.

Berber Taxi, which follows 2006’s indie release On the Ebony Road, celebrates those roots-instrumentation includes oud, cajón, tahrija, darbuka, etc., in addition to the standard Western array-but is, at the same time, unquestionably a contemporary jazz recording. Zarra’s lithe voice, though never used ostentatiously, has an impressive range, and her improvisational acumen is undeniable; her ease in shifting between several North African and European languages (among them English) only adds to the diversity already resident within the grooves. The polyrhythmic title track, a traditional folksong appropriately sung in Berber, tells the tale, as Zarra explains in her liner notes, of “finding love in distant places” and serves as the ideal representation of what the singer has created here. Swooping from soprano downward and back again, Zarra’s timing is sharp, her command irrefutable and her instincts, among them the knowledge of when to lie back, the mark of a leader.

“Issawa’s Woman,” in French, is alternately dense and airy, and its segue into the sensual Arabic ballad “Leela” reiterates the album’s array of moods and rhythms. Berber Taxi‘s tour de force, “Mossameeha,” shifts dramatically-a spare two-minute prelude of voice and lone exotic stringed instrument gives way to urban buzz. Layers of voice, insistent drums and echoey electronic keys draw lines, not only from East to West, but also from the ancient to the postmodern.

Vocalist Naima Shamborguer has been an illuminating presence on Detroit’s jazz scene for decades, elevating standards with her richly textured voice and classically trained ear. … END_OF_DOCUMENT_TOKEN_TO_BE_REPLACED

Aaron Seeber’s cymbals don’t mix—at least not in this mix. As presented in audio by the drummer himself and co-producer Kevin Sun, the ride and … END_OF_DOCUMENT_TOKEN_TO_BE_REPLACED

With the exception of certain legends like J.J., Kai, and Big T, trombonists tend to be the consummate outsiders of jazz; they know the rules … END_OF_DOCUMENT_TOKEN_TO_BE_REPLACED