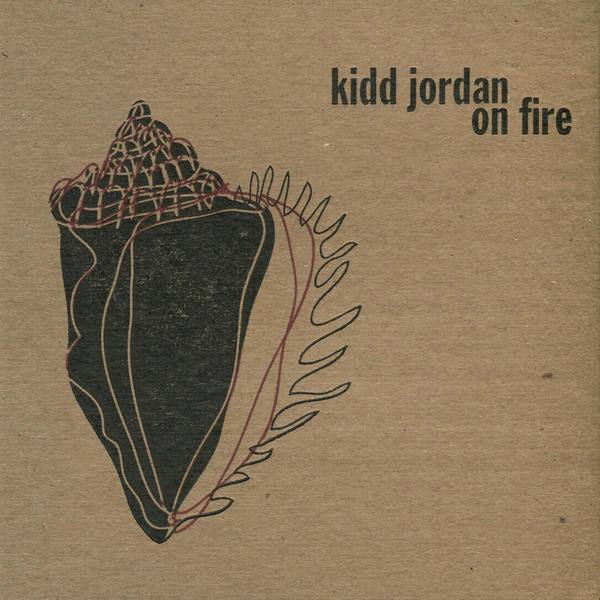 Initially in On Fire, Kidd Jordan’s playing seizes on a line and pushes it through space. This line comes out of horizontal abstract explorations that, in the long run, magically develop into repeatedly stretched-out emphatic choruses by the first track’s close. To anchor Jordan’s saxophone sound is Harrison Bankhead, who bows exceedingly low tones on bass, and Warren Smith, whose process-oriented snare/cymbal combinations pull everything together. The music evolves into a melodic sketch in the sax’s high register, which opens and closes into both song and deconstructed tunes. Brusque, brushed snare drums, accentual tinkling bells, cymbal hisses, short arco strokes, non-resonant pizzes and tapping on the bass strings fill in the color.

The bass and the sax seem to fall in after Smith’s overtly rhythmic introduction on the vibes in the third track. He keeps to the vibes throughout and hits notes in a natural course that penetrate the ear and leave a sound memory behind; his sound-making tools are both the mallet heads and sticks. Taking a back seat to the vibes, Jordan plays a melody that resolves into a blue-note phrasing, which, in a chorus, takes the group out.

The structure of Jordan’s playing is the same throughout the record. But Bankhead and Smith have as much leading force in the album as the sax does. Bankhead takes a pizz solo on the cello and one on the bass that highlights the recording. The array of sound in On Fire makes it unique. But this is not incendiary music. Jordan’s last lone notes and the way he shapes them somehow sends that message. Kidd Jordan is not putting out a fire; he is simply moving out of a zone.

At the age of 88, Houston Person remains a reliably consistent interpreter of song. He has never been particularly extreme or outrageous, preferring to keep … END_OF_DOCUMENT_TOKEN_TO_BE_REPLACED

Chet Baker made a number of classics throughout his brief, cruel life, but his debut vocal album, Chet Baker Sings, might be his summit. Nobody … END_OF_DOCUMENT_TOKEN_TO_BE_REPLACED

If ever there was a launchpad to immerse oneself in Canada’s creative jazz and vibrant scene, Toronto guitarist and composer Avi Granite is the ideal place … END_OF_DOCUMENT_TOKEN_TO_BE_REPLACED