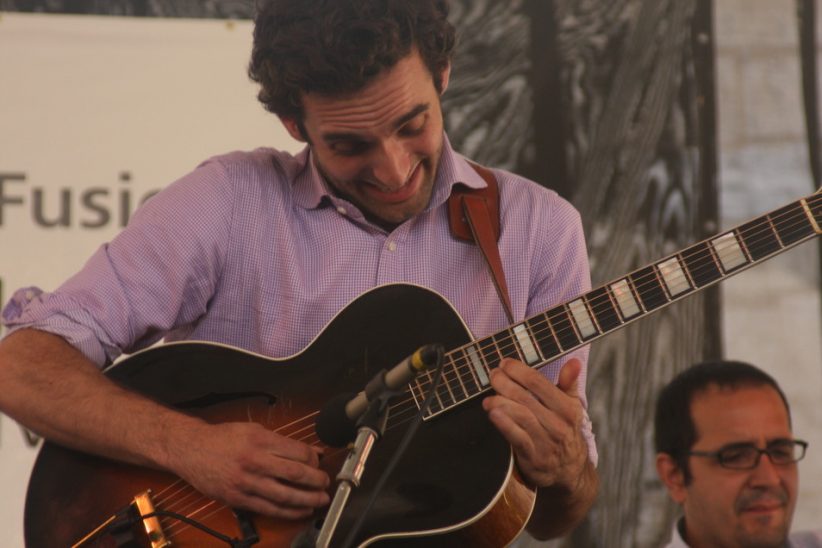 There was a time not so long ago when merging jazz with other genres tended to involve either fusing it with rock rhythms or going a more European-classical route (à la artists associated with the ECM label). These days, though, musicians are casting wider nets in their search for new combinations of sounds. A case in point is Gladwell, the brilliant young guitarist Julian Lage’s even better follow-up to his Grammy-nominated debut album of two years ago, Sounding Point.

The prodigy is all grown up now at 23, more dazzling than ever on guitar, and fronting a tight, unorthodoxly instrumented ensemble of cellist Aristides Rivas, percussionist Tupac Mantilla, bassist Jorge Roeder and saxophonist Dan Blake. There’s a chamber-jazz feel to the group, what with Rivas’ cello and the way Blake’s playing sometimes calls to mind the pristine, soaring tone of saxophonist Jan Garbarek. But the Blake-composed tune “However,” for example, pulls Afro-pop, Irish fiddle music and American folk influences into a mesmerizing mix. “Margaret” celebrates Lage’s singer-songwriter friend and occasional collaborator Margaret Glaspy, Blake’s switch to melodica gives “Cocoon” a European-folk feel, Latin- and flamenco-like inflections appear here and there, and the trio piece “Iowa Taken” sounds at times like something Oregon or Pat Metheny might have done.

The uptempo set-closer “Telegram” is the flashiest tune on the disc, but Lage throughout is more interested in making music than flaunting technique. That’s especially evident in the five of the CD’s 12 tunes he performs solo. Three of those five are multitracked efforts on which Lage accompanies himself in evoking specific moods. But the best are two utterly charming solo-guitar covers, with Lage applying a quiet virtuosity to “Autumn Leaves” and the folk standard “Freight Train.”

Trevor Dunn is the consummate model of jazz-metal mashups. The prolific bassist and composer has meted out the heaviest of bottom-end riffage as a member … END_OF_DOCUMENT_TOKEN_TO_BE_REPLACED

If you ever needed a comprehensive introduction to the appeal of Ahmad Jamal’s straight bop work, the two volumes of Emerald City Nights may just … END_OF_DOCUMENT_TOKEN_TO_BE_REPLACED

In the history of New York jazz clubs, Pookie’s Pub barely lands on the radar. The Hudson Street space was miles away from the Village … END_OF_DOCUMENT_TOKEN_TO_BE_REPLACED

All hail Bill Frisell—the Man, the Myth, the Marksman—but this set had me from “Johnathan Blake.” Gigging in Ravi Coltrane’s band a few years back, … END_OF_DOCUMENT_TOKEN_TO_BE_REPLACED