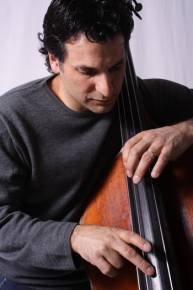 Who said three’s the charm? There’s a lot to be said for those moments when the John Patitucci Trio isn’t acting alone on Remembrance, an intimate studio session that primarily finds the veteran bassist-composer-bandleader collaborating with reedman Joe Lovano and drummer Brian Blade.

Take “Scenes From an Opera,” for example. It’s a performance that wouldn’t be nearly as evocative or soulful without the inspired input of cellist Sachi Patitucci, the bassist’s wife. Or “Meditations,” one of four arrangements on Remembrance deftly accented by percussionist Rogerio Boccato. Then, too, there’s the album’s title track to consider, a solo homage to the late Michael Brecker that makes haunting use of Patitucci’s six-string electric bass and six-string electric piccolo bass.

Of course, that’s not to say that the teaming of Patitucci, Lovano and Blade doesn’t deliver on its promise. Remembrance may be dedicated to, as Patitucci puts it in his liner notes, “fellow musicians who have inspired us that have recently and not so recently departed this world,” but it’s scarcely a solemn affair. The trio performances capitalize on the ensemble’s great chemistry, each in a different light, starting with the rhythmically and harmonically skewed “Monk/Trane”; the insinuating stroll “Sonny Side,” a splendid showcase for Lovano’s robust and restless tenor; and “Blues for Freddie,” a jaunty postbop salute composed, like all the tunes here, by Patitucci. When it comes to regional flavoring, though, nothing proves tastier than the Boccato-augmented quartet performance of “Messaien’s Gumbo.”

For those who love low woodwinds, Brian Landrus has become a steadfast champion. Few musicians this side of Harry Carney have specialized in bass clarinet … END_OF_DOCUMENT_TOKEN_TO_BE_REPLACED

Vocalist Naima Shamborguer has been an illuminating presence on Detroit’s jazz scene for decades, elevating standards with her richly textured voice and classically trained ear. … END_OF_DOCUMENT_TOKEN_TO_BE_REPLACED

Aaron Seeber’s cymbals don’t mix—at least not in this mix. As presented in audio by the drummer himself and co-producer Kevin Sun, the ride and … END_OF_DOCUMENT_TOKEN_TO_BE_REPLACED

With the exception of certain legends like J.J., Kai, and Big T, trombonists tend to be the consummate outsiders of jazz; they know the rules … END_OF_DOCUMENT_TOKEN_TO_BE_REPLACED