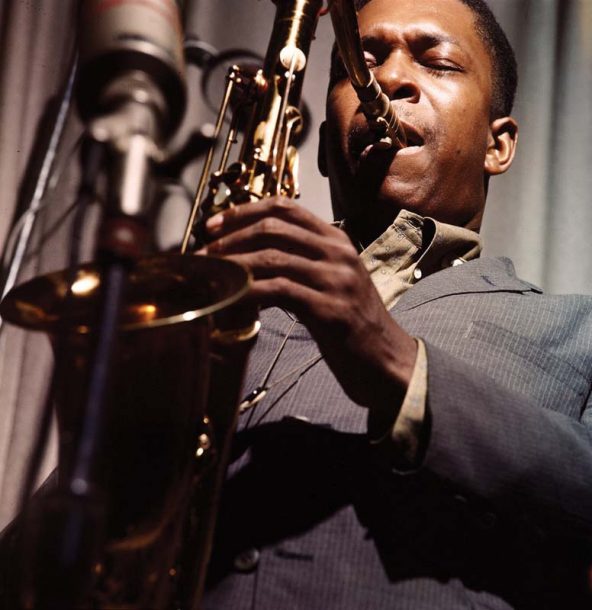 Let’s assume there’s zero chance you’re considering the purchase of a set like this one-six monaural Coltrane albums, sans extras-unless you already own the records in another form. Which is to say, stereo form. Forking over the cash then becomes a matter of hearing something new in music you’ve likely heard a lot of, gaining new insight into Trane, as it were.

A point in this set’s favor: The material is sourced from master tapes used just once previously, to press up the albums in the first place. This is what you likely would have heard if you purchased Giant Steps in 1960 and dropped that knotty platter onto your turntable, which probably would have played in mono only.

Mono Coltrane is a formidable animal. We sometimes take for granted the physicality of his playing. On “Giant Steps” we’re reminded once again of how downright locomotive-like that playing could be, even as it twisted itself into dozens of musical shapes. Intense sonic geometry. Other rewards are smaller: the crisp, well-delineated note patterns of Milt Jackson’s vibraphone, on Bags & Trane; Freddie Hubbard’s Gabriel-esque tone on “Dahomey Dance,” from Olé Coltrane; just how readily Trane could take to Ornette Coleman’s compositions, as we hear on “Focus on Sanity,” from The Avant-Garde, with Don Cherry serving as the bridge between two modernist titans. The Avant-Garde probably works better in stereo-put simply, avant-garde albums often do, whereas blues and hard-bop albums tend not to. But what these presentations also serve to remind us is that Coltrane, for all of his freeform explorations, especially in a live context, made some tight little albums. He pushed toward the mainstream, and a box like this underscores that Coltrane always hankered after listeners, at least more so than the rest of the avant-garde brigade.

To that end, we should consider this set’s greatest success, Coltrane Plays the Blues. It’s always been an underrated album, but the mono format provides the perfect digs for the record. Even when Coltrane was in full flight, soaring to celestial musical regions rarely touched upon, his thematic anchor was the blues. “Blues to Bechet” has added oomph and kick in its mono garb thanks to the bass-drum work of Elvin Jones, a bluesy dude himself. “Mr. Knight” is a sun-kissed shuffle, but with Trane’s tenor bursts punctuating the proceedings like drops of warm summer rain.

The package itself reproduces the artwork of the original albums, complete with back-in-the-day liner notes-in tiny type-on the reverse covers. Jazz writer Ashley Kahn has penned a new intro that situates Trane in an audiophile context, parsing the prevailing opinions on how people tended to feel about mono and stereo albums 60 years ago.

Rounding out the box is The Coltrane Legacy, a scattershot outtakes comp from 1970. The earliest-and some of the best-material on it is a few discarded cuts from the January 1959 Bags & Trane session (“Blues Legacy” is the smoldering pick of the bunch). “Original Untitled Ballad,” from a May 1961 date with Eric Dolphy-six months before their landmark Village Vanguard recordings-is the track to return to repeatedly.

Since February 2022, when Russia invaded its neighbor Ukraine, we’ve received fresh reminders of the horrors and atrocities of war. So it’s timely that the … END_OF_DOCUMENT_TOKEN_TO_BE_REPLACED

From their name to their album title and the dedications of the compositions within, WeFreeStrings takes inspiration from fearless activists. The album’s title track is … END_OF_DOCUMENT_TOKEN_TO_BE_REPLACED

Dreams—some born of illness and isolation, others bound to artistic aspirations and hope for the future—cohere to form a reality for Caili O’Doherty. Leading a … END_OF_DOCUMENT_TOKEN_TO_BE_REPLACED