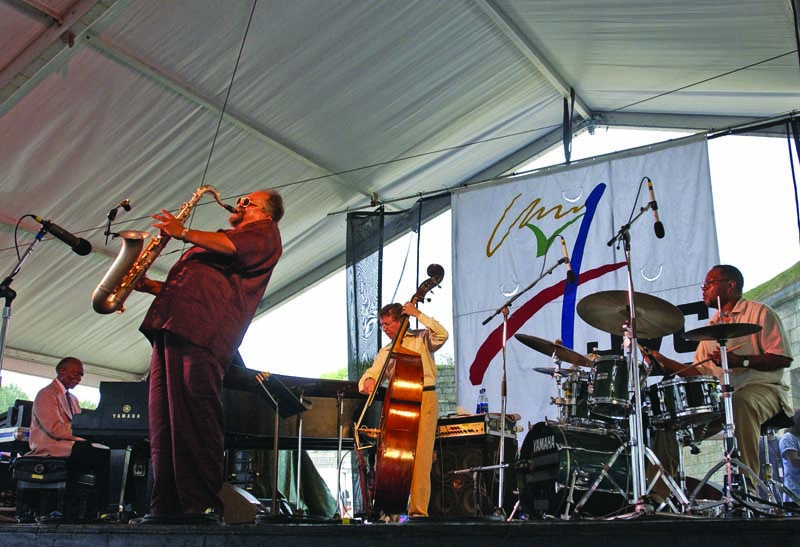 Contemporary classic: The Joe Lovano Quartet at the 2005 Newport festival

So far this year, the great Hank Jones has been an important part of two outstanding archival releases: All My Yesterdays, which captured two 1966 Village Vanguard sets by the big band that Jones’ brother Thad co-led with Mel Lewis, and this quartet date from the 2005 Newport Jazz Festival. The nearly four decades that passed between the recording of the former and latter albums seem to have had nary an effect on the pianist’s playing. Lovano may be the nominal leader here, but Jones-just about to celebrate his 87th birthday at the time-provides more than his share of wit, dexterity and shockingly youthful spunk. His solo on brother Thad’s “Kids Are Pretty People,” for example, shifts with ease from urbane to bluesy via a perfectly placed quote from Ellington’s “Rockin’ in Rhythm.”

Lovano, for his part, is in high spirits, lurching giddily through “Big Ben” and letting out joyful squeals during the driving coda to “Don’t Ever Leave Me.” At times he’s almost too loquacious-his note-heavy treatment of “I’m All for You” comes close to demolishing that ballad-but given the caliber of the company, who can blame him for getting excited? The group is completed admirably by bassist George Mraz and drummer Lewis Nash, whose fluid, frisky back-to-back solos on “Bird’s Eye View” deserve special notice.

It all comes to a head with a superlative closing run through Oliver Nelson’s sly blues “Six and Four.” Jones gives his solo the full rolling barrelhouse treatment, while Lovano darts around the changes like a prizefighter in the ring. That these two masters got to cut three studio albums together before Jones’ death in 2010 was lucky enough; adding this ultra-sharp performance to the catalog is a welcome bonus.

In the early ’70s, Freddie Hubbard was paralleling Miles Davis in going electric and funky. Unlike Miles, though, Hubbard’s recordings were increasingly defined by his … END_OF_DOCUMENT_TOKEN_TO_BE_REPLACED

Milton “Brew” Moore once opined that “Anyone who doesn’t play like Pres is wrong,” but he later realized the limitations of such a position and … END_OF_DOCUMENT_TOKEN_TO_BE_REPLACED

Since February 2022, when Russia invaded its neighbor Ukraine, we’ve received fresh reminders of the horrors and atrocities of war. So it’s timely that the … END_OF_DOCUMENT_TOKEN_TO_BE_REPLACED

From their name to their album title and the dedications of the compositions within, WeFreeStrings takes inspiration from fearless activists. The album’s title track is … END_OF_DOCUMENT_TOKEN_TO_BE_REPLACED