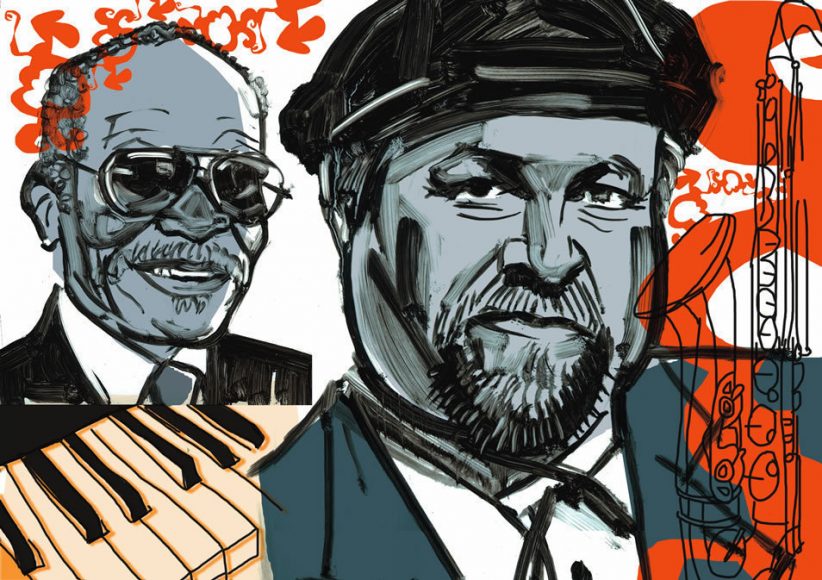 Joyous Encounter opens with Vernon Duke’s “Autumn in New York,” introduced by a harmonic synopsis from Hank Jones’ solo piano and then by a breathy statement of the melody from Joe Lovano’s tenor sax. Paul Motian’s light brushwork and shimmering cymbals soon join in, and so does George Mraz’s pause-punctuated bass phrases. It’s September of 2004, autumn in New York, and the quartet has picked up right where they left off 15 months earlier-recording a sumptuous ballad at Manhattan’s Avatar Studios.

The quartet’s previous album, also released under Lovano’s name, is the all-ballads session I’m All for You. It proves that tunes can be played very slow and very soft and still have as much rhythmic vitality and harmonic invention as the most boisterous bop numbers. Lovano, a big man with a fat tone on the saxophone, doesn’t reduce his sound so much as he compresses it, squeezing the same number of ideas into smaller, quieter spaces. He took his cue from Jones, the most self-effacing of musicians. The pianist’s comfortable passages never call attention to themselves on I’m All for You, but if you listen closely you’ll notice that he’s radically reworking the harmony.

On Joyous Encounter, the first three-and-a-half minutes of “Autumn in New York” remind us of everything that was wonderful about the previous CD. But then Jones pushes the beat with a chord, Motian picks up the pace, and the song shifts gears from ballad tempo to midtempo swing.

It’s as if bedroom seduction has turned into bedroom action. It’s as if the quartet wants to prove that it can play with the same restraint, the same compression, at any speed.

For seven more minutes of “Autumn in New York,” and for 10 more tracks ranging from the slow simmering of Thad Jones’ “Quiet Lady” to the rumbling boil of John Coltrane’s “Crescent,” the quartet proves that the coiled grace of its previous session had nothing to do with tempo and everything to do with skill and attitude.

Playing with such understatement is a particular challenge for Lovano, who has proven he can blow away a room with his horn. Though he’s the bandleader, the 52-year-old Lovano is the youngest member of this quartet by eight years, and he seems eager to learn as much as possible from his elders, especially the 86-year-old Jones.

Just listen to their unaccompanied duet on the 1932 Arthur Schwartz ballad “Alone Together.” The tune opens with a minute and a half of solo piano, a demonstration of how to play with an even tone and unhurried patience, trusting that listeners don’t need to be hit over the head to discover the continual surprise of substitute notes. Lovano follows this example on his own solo, a performance so constrained in its dynamics and pacing that it forces our attention to its imaginative choices of intervals and timbres.

Or listen to Hank Jones’ “Consum-mation,” a bouncy bebop number with a snappy theme that’s an invitation to overplaying. The invitation is declined by one and all. The composer takes the first solo, and his rhythmic phrasing is so sure and his melodies so appealing that it almost seems as if he’s still playing the original theme. In fact, he’s using subtle fragments of the theme to construct whole new melodies; Lovano and Mraz adopt that method on their solos as well.

Lovano plays curved soprano sax on two numbers, which allows him to separate from Jones’ register and play on top. Jones slows Thelonious Monk’s “Pannonica,” fittingly dedicated to the late soprano legend Steve Lacy, till it becomes a reverie. The pianist’s fluid phrasing is the diametric opposite of Monk’s angular bent, but his harmonic sense is very similar; Jones’ phrases often end on unexpected notes that nonetheless complete a melody. Lovano, whose usual phrasing is more Monk-like than Jones-like, tries the fluid approach and finds it opens a door to a new lyricism. Something similar happens when he plays soprano on the Thad Jones ballad “A Child Is Born.”

Lovano has a long history with the Jones Family of Detroit. Hank’s younger brother had just left the Thad Jones-Mel Lewis Jazz Orchestra when Lovano joined in 1980, but Thad’s compositions and arrangements remained in the band’s book. Two of those compositions and one of those arrangements, “Don’t Leave Me Now,” are featured on Joyous Encounter.

Lovano toured with Hank’s even younger brother Elvin in 1987 and used the legendary drummer on his 1998 album Trio Fascination. Elvin is saluted on the new album by two tunes: Oliver Nelson’s “Six and Four,” which appeared on the comp of drummer-led tracks The Big Beat (Milestone), and “Crescent,” the title track of a 1964 disc by the John Coltrane Quartet.

These rambunctious numbers truly test the Lovano quartet’s commitment to restraint. Motian takes the lead on “Six and Four,” proving that you can establish a compelling groove and spin variations on it at the same time. Jones plays briskly and daringly on his solo, turning the melody inside out without ever losing touch with Motian’s push-and-pull beat. Lovano sings and honks on his tenor, but he too resists the temptation to stray from the drummer’s phrasing.

“Crescent” begins with a thickened tenor statement over a free drum solo and rattling piano, but after this nod to Coltrane’s sound, Lovano’s quartet turns its attention to Coltrane’s composition. The reverberating overtones and the simultaneous solos fall away to reveal the elegance of the tune itself, played economically to a midtempo swing. Both Lovano and Jones illustrate how Trane’s sheets of sound can be distilled to clean arpeggios. There was something thrilling and unmatchable about the exuberant overstatement of the original recording, but there’s no better way to reveal a new side of this piece than by such understatement.

There’s a trade-off in pursuing such subtlety, of course. You can’t tap into the human experiences of fury and ecstasy with such a low-key approach, and you run the danger of losing your listeners by not grabbing their attention with something dramatic. If you’re a young musician trying to make a name for yourself, that’s a legitimate concern.

Let the listeners come to you. It’s a liberating attitude, and it’s one that Lovano has eagerly adopted on I’m All for You and Joyous Encounter.

When trumpeter Brian Lynch released the first volume of his “Songbook” series last fall, Bus Stop Serenade, he promised more would soon be forthcoming, and … END_OF_DOCUMENT_TOKEN_TO_BE_REPLACED

Tenor titan Walt Weiskopf’s European Quartet has been together for about five years, producing several sterling albums along the way. As indicated by that growing … END_OF_DOCUMENT_TOKEN_TO_BE_REPLACED

The spell that Allison Wheeler casts with her debut album Winterspring felt more potent the third time through, and each subsequent spin deepened the reverie. A poetic … END_OF_DOCUMENT_TOKEN_TO_BE_REPLACED

If, as he states in the album’s press materials, Geoffrey Keezer wanted Playdate to punctuate his versatility, he sure gets right down to it. A … END_OF_DOCUMENT_TOKEN_TO_BE_REPLACED