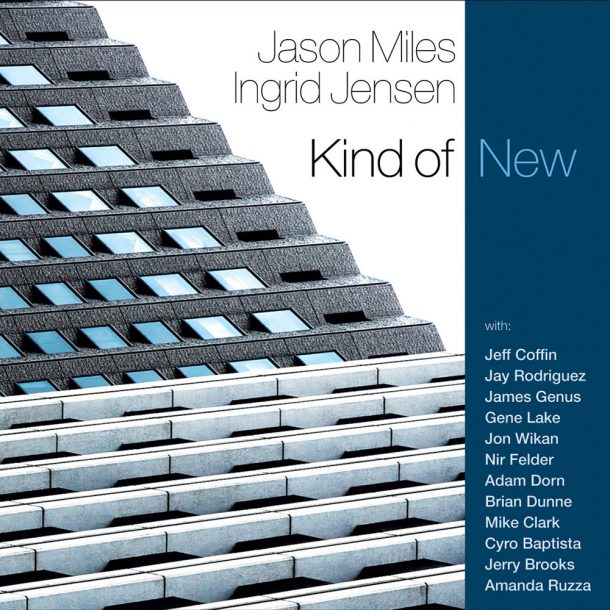 Cover of Jason Miles and Ingrid Jensen's Kind of New

First things first: Kind of New is informed not by Miles Davis’ 1959 Kind of Blue but rather the electric music of Bitches Brew onward. Jason Miles, a keyboardist who worked with Davis on a few of his later projects, explains in his introductory essay that Keith Jarrett’s Rhodes work with the trumpeter provided the inspiration for this exploration. But that still isn’t modern enough to describe what’s happening here aesthetically: This is music crafted in the spirit of late Miles Davis, but it’s very much of its own time.

Jason Miles couldn’t have found a more simpatico partner for the outing than trumpeter Ingrid Jensen, an intrepid, propulsive—and mighty funky—player. They survey several styles and tempos: “The Faction of Cool” moves gently and deliberately, Miles more Jimmy Smith than Jarrett under Jensen’s understated lines. But other cuts are burners: “Close to the Action” and “Street Vibe,” the latter co-written by Miles and Tom Harrell, are among several tracks that also spotlight saxophonist Jay Rodriguez; both go deep-groove immediately and firmly, giving Jensen ample opportunity to blow tough.

“Seeing Through the Rain,” co-written by and featuring Jeff Coffin on saxophones, also unfolds unhurriedly, a vaguely tropical sway at its core; it features Cyro Baptista’s percussion and doubles up on the drummers and bassists. Wayne Shorter’s “Sanctuary,” which closed out Bitches Brew, is all waves, bursts and flutters. For obvious reasons it’s the most evocative of Davis’ early electric sound, full of revelations. Yet, like the rest of Kind of New, it’s kind of now.

At the age of 88, Houston Person remains a reliably consistent interpreter of song. He has never been particularly extreme or outrageous, preferring to keep … END_OF_DOCUMENT_TOKEN_TO_BE_REPLACED

Chet Baker made a number of classics throughout his brief, cruel life, but his debut vocal album, Chet Baker Sings, might be his summit. Nobody … END_OF_DOCUMENT_TOKEN_TO_BE_REPLACED

If ever there was a launchpad to immerse oneself in Canada’s creative jazz and vibrant scene, Toronto guitarist and composer Avi Granite is the ideal place … END_OF_DOCUMENT_TOKEN_TO_BE_REPLACED

If Avram Fefer is a new name to you, you are not alone. His new album is so good it should make us all embarrassed … END_OF_DOCUMENT_TOKEN_TO_BE_REPLACED