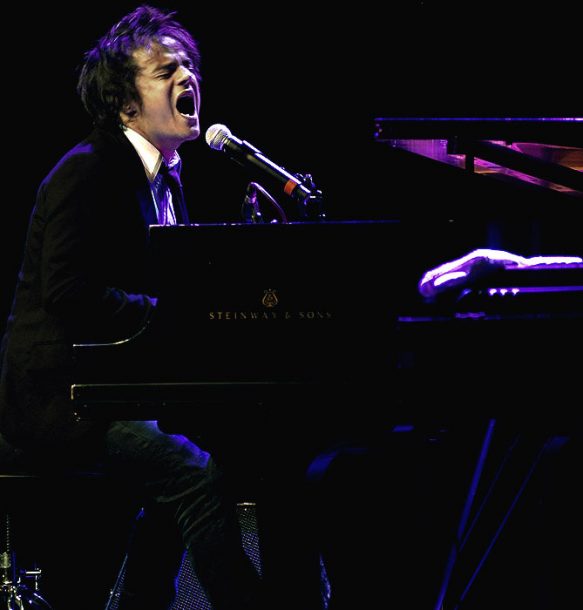 Several pianos were blown up to create the striking cover photo for Jamie Cullum’s expertly crafted new album. That none of the music contained on The Pursuit is remotely as explosive is no surprise; this playful English singer and pianist is much better at creating sparks and building things to a steady boil, musically speaking, than he is at detonating. His percolating version of Cole Porter’s “Just One of Those Things,” which opens The Pursuit, starts softly, then turns into a brassy romp replete with the current Count Basie Orchestra, an ebullient vocal and an inviting, Monk-inspired keyboard vamp by Cullum. The fetching results demonstrate just how well this eclectic musical chef can cook when all the right ingredients are in place.

Still, it’s disappointing that this dozen-song collection, his fifth studio outing of the past decade, doesn’t strive for some of the same subversive edge as its cover art. This holds especially true given his abiding admiration for the genre-leaping work of the late Frank Zappa. (“I was listening to Frank way before I got into any jazz,” Cullum told this writer in 2006. “Zappa had 10 lifetimes of music to offer.”)

Now 30, Cullum is more inclined to deftly bend envelopes than shred them, as befits a talented troubadour who has played the intimate Oak Room in Manhattan’s Algonquin Hotel and the sprawling Coachella rock festival in California. His position as “the biggest-selling British jazz artist ever” is a commercial blessing and an artistic curse. That status is unlikely to change with The Pursuit, which mixes his own work with intriguing reinventions of songs by Michael Jackson, Rihanna and Stephen Sondheim that are enjoyable if low in actual jazz content.

By design, Cullum’s early albums brought a youthful vigor and precocious pop-rock savvy to standards and jazz-inflected originals alike. The result was multi-platinum sales and swift audience approbation for how effectively he put his stamp on classics by Ellington and Hendrix, Gershwin and Radiohead. Given the young age of many of his fans, Cullum’s versions of “Well You Needn’t” and “I Can’t Get Started” may well have marked the first time his devotees embraced a jazz-oriented aesthetic.

That’s all for the good. Unfamiliar music often seems more palatable to a young crowd when it is enthusiastically performed by one of their own, and Cullum’s winning delivery on The Pursuit is palpable. However, as was the case on his 2005 album, Catching Tales, he continues to focus more on making sophisticated pop music with elements of jazz rather than vice versa, while displaying his clear admiration for the likes of Paul McCartney, Randy Newman and Joe Jackson. Those hoping to hear Cullum reinforce his jazz bona fides will mostly have to settle for some appetizers in lieu of a main course.

On his self-penned “I’m All Over It,” he sounds like he’s channeling the soulful English rock band Squeeze in its early 1980s prime, while Billy Joel should be happy to claim “Love Ain’t Gonna Let You Down” as his own. “Mixtape,” which Cullum co-wrote with his brother, Ben, name-checks Monk and Satchmo in its lyrics (and features an annoyingly brief piano solo). But its melancholic tone and gently spiraling motif suggest Radiohead’s Thom Yorke as a nightclub crooner.

Speaking of crooning, the woozy, bluesy “I Think, I Love” benefits from its spare arrangement-very effective, with just piano and voice-but stumbles with such clumsy couplets as “You drunk too much wine and threw up in the taxi cab.” Given more time to evolve, Jamie Cullum will surely grow more refined. Whether he jazzes things up, or down, though-and for what reasons-remains to be seen.

You want to get the word about Bird? Sheila Jordan, doyenne of jazz singers and 93 years young, continues to share the gospel of bebop, … END_OF_DOCUMENT_TOKEN_TO_BE_REPLACED

Prolific bass player Billy Mohler enjoys the best of two disparate worlds. In one, the L.A.-based multi-instrumentalist is a Grammy-nominated sessioneer who’s played with Lady … END_OF_DOCUMENT_TOKEN_TO_BE_REPLACED

Would it be overpraising Tom Harrell to describe his long recording career as practically peerless? Album after album, sometimes year after year, the Midwest-bred trumpet … END_OF_DOCUMENT_TOKEN_TO_BE_REPLACED

Compared to the other outré jazz elders on Adrian Younge and Ali Shaheed Muhammad’s Jazz Is Dead label, Katalyst is a still a relatively fresh … END_OF_DOCUMENT_TOKEN_TO_BE_REPLACED