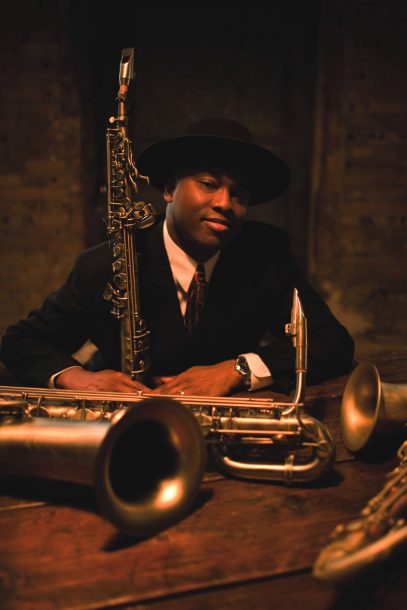 Multi-saxophonist James Carter likes to try out different concepts-he’s done albums of hard bop, ballads, Billie Holiday songs, Pavement covers, Django homages and guitar-drenched jazz rock-but he keeps coming back to organ-driven groove jazz. At the Crossroads was originally conceived as a record that would examine the meeting place of blues and gospel, but apparently it was no match: The blues-the smoking, grooving kind-took over.

That was probably due to the chemistry of this band. Carter has been playing with organist Gerard Gibbs and drummer Leonard King Jr. for 10 years, and their comfort with one another underpins the session. So does their versatility. They start with the fast and greasy Matthew Gee number “Oh Gee,” slow down with “JC Off the Set”-Gibbs’ response to Carter’s old cooker “JC on the Set”-and chew over the blues in Ronald Shannon Jackson’s “Aged Pain,” with its Monkish chord changes and intervals. Guests show up: Vocalist Miche Braden delivers the suggestive lyrics of the swinging “The Walking Blues” (and sounds exactly like a trumpet when she scats), as trumpeter Keyon Harrold and trombonist Vincent Chandler flesh out the frontline.

Carter’s tone-alternately gruff and sensuous, always balancing melody and skronk-of course gets the limelight. His is, after all, one of today’s most unmistakable saxophone voices, and he knows it. He deploys it fully whether he’s blowing “Come Sunday” or shrieking and squeaking through the funk of King’s “Lettuce Toss Yo’ Salad.”

In the early ’70s, Freddie Hubbard was paralleling Miles Davis in going electric and funky. Unlike Miles, though, Hubbard’s recordings were increasingly defined by his … END_OF_DOCUMENT_TOKEN_TO_BE_REPLACED

Milton “Brew” Moore once opined that “Anyone who doesn’t play like Pres is wrong,” but he later realized the limitations of such a position and … END_OF_DOCUMENT_TOKEN_TO_BE_REPLACED

Since February 2022, when Russia invaded its neighbor Ukraine, we’ve received fresh reminders of the horrors and atrocities of war. So it’s timely that the … END_OF_DOCUMENT_TOKEN_TO_BE_REPLACED

From their name to their album title and the dedications of the compositions within, WeFreeStrings takes inspiration from fearless activists. The album’s title track is … END_OF_DOCUMENT_TOKEN_TO_BE_REPLACED