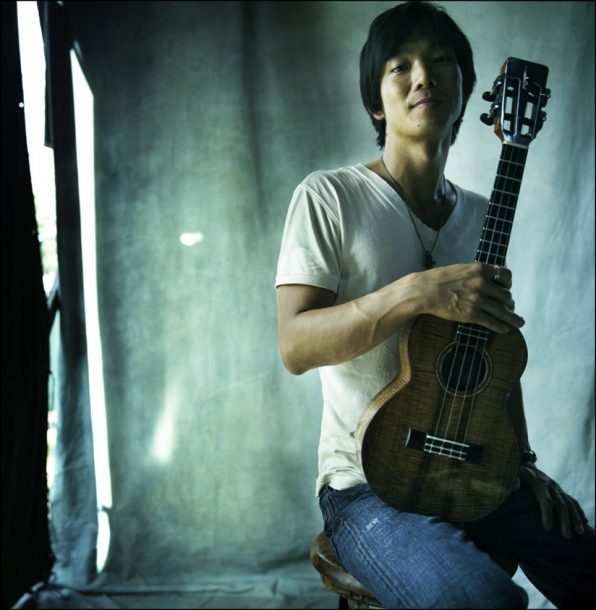 Jake Shimabukuro plays the ukulele, which is like saying Béla Fleck plays the banjo. In other words, he plays it astonishingly well, defying genre, and with great joy. While the Hawaiian musician has been performing and recording since the late 1990s, with numerous albums to his credit, a ubiquitous YouTube video of Shimabukuro performing George Harrison’s “While My Guitar Gently Weeps” raised his profile considerably.

With his new CD, Shimabukuro folds his amazing ukulele skills within a group setting, performing solo on two versions (one studio, one live) of Queen’s “Bohemian Rhapsody.” Transcending the limitations of his instrument’s four-string/two octave range, Shimabukuro is a smart, melodic player with dexterous shredding ability that he holds in check like a master. On the opening “143 (Kelly’s Song) 2011,” Shimabukuro embellishes his group with a string section, and the novelty of his chosen instrument is rightly obscured by the sheer musicality of his sound. Shimabukuro is so good on record that it’s easy to forget what instrument he’s playing. Still, he’s a nuanced virtuoso, and by working with a small rhythm section we can hear his sensitivity on standout tracks like his rendition of Leonard Cohen’s “Hallelujah.”

The aptly titled “Ukulele Brothers” has Jake playing alongside his brother Bruce, with sterling results. Shimabukuro wrote most of the compositions here, but a certain amount of attention is drawn to his covers, in this case the double-dose of “Bohemian Rhapsody,” where his arranging is as startling as his playing and will undoubtedly inspire others to pick up the little ax.

The title of this album, and the title of its first track, “Jade,” announce a clear shift in focus for vibraphonist Sasha Berliner from her … END_OF_DOCUMENT_TOKEN_TO_BE_REPLACED

Play or Die is a macabre title for this reissue by Tony Williams (1945-1997), the incredible drummer who rose to fame as a teenager with … END_OF_DOCUMENT_TOKEN_TO_BE_REPLACED

Any recording that contains a track titled “Rewind Fee” has a substantial bit of throwback in its spirit, and that’s the case with Spider Season, the … END_OF_DOCUMENT_TOKEN_TO_BE_REPLACED