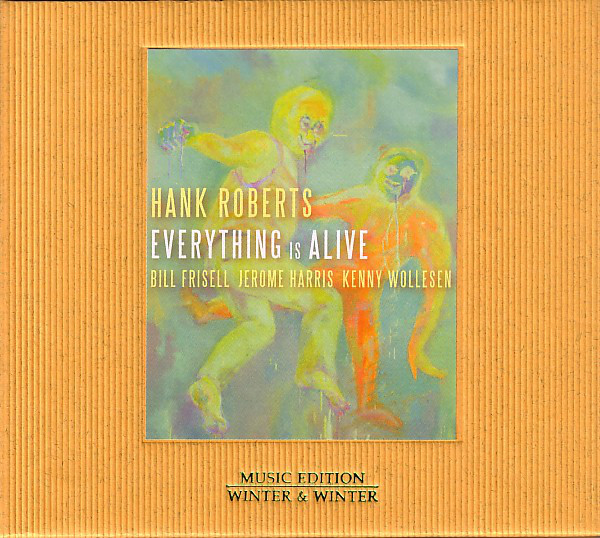 Cover of Hank Roberts album Everything Is Alive

It’s no slap at Bill Frisell to say you can miss one of his albums now and then without any real harm, so entrenched is the guitarist’s rootsy, texture-minded sound. But playing by someone else’s house rules, he can reveal fresh qualities in his twang and shimmer. That’s the case on the alluring new album by his longtime colleague, cellist Hank Roberts—no Americana piker himself. Exhibit A: “JB,” a three-minute dose of liquid funk that may occasion the first time you’ve had Frisell and James Brown in the same thought.

Roberts has never had to worry about the familiarity factor. He has recorded relatively few albums since emerging on the avant-garde jazz scene in the early ’80s, and has toured little since settling in upstate New York a few years later. But he brings his own unique jazz/classical/roots-music sensibility to Everything Is Alive. Leading a chamber-style quartet including bassist and guitarist Jerome Harris and drummer Kenny Wollesen, Roberts nibbles at folk, gospel and Native Americana while partaking of spatial and atonal strategies and sound experiments.

“Crew Cut” gets the album off to an energetic start with its rock-style guitar chords and blues shavings and Roberts’ frolicsome lines on jazzaphone fiddle. Sotto voce chants and Wollesen’s chipper strokes lend warmth to the front-porch picking on “Easy’s Pocket.” Tempo shifts, independent parts and wood block animate “Treats With a Blind Dog.” Roberts’ drawn-out lines and Frisell’s tight figures provide the tension on “Necklace.” All the pieces fit together with quiet strength and elusive charm.

Dreams—some born of illness and isolation, others bound to artistic aspirations and hope for the future—cohere to form a reality for Caili O’Doherty. Leading a … END_OF_DOCUMENT_TOKEN_TO_BE_REPLACED