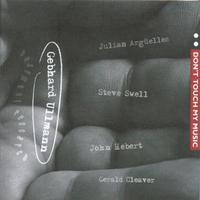 Don’t Touch My Music comprises two individually packaged discs, so even as each has the same title and virtually the same cover, one assumes they are separate releases. Disc one covers the first set of a 2007 concert in Krakow, Poland, by Ullmann’s Basement Research band (Ullmann on bass clarinet and tenor sax, Julian Argüelles on soprano and bari saxes, Steve Swell on trombone, John Hébert on bass and Gerald Cleaver on drums). Disc two covers the second set.

Ullmann flies much lower beneath the critical radar than his talents merit. A fiery, rambunctious soloist and ecumenical composer with an experimental, free-jazz bent, his music is always well conceived and passionately delivered. That much is certainly true of both these discs. Ullmann compositions like “Dreierlei,” “Kleine Figuren” (Nos. 1, 2 and 3) and the title track incorporate intricate, tightly harmonized melodies, odd-time ostinati, clever juxtapositions of rhythm and sound, and plenty of room for blowing. The improvised elements seldom stand apart, but are rather an intrinsic part of the overall form of each tune. The horn players are top-notch, and the rhythm section burns. Overall, the music has the loose-as-it-can-be/as-tight-as-it-needs-to-be vibe that defines so much great jazz.

Alabaster DePlume, the stage name for the Mancunian saxophonist and composer Gus Fairbairn, makes intimate music, but that’s only the beginning. His work typically combines his … END_OF_DOCUMENT_TOKEN_TO_BE_REPLACED

South African piano great Nduduzo Makhathini’s latest, In the Spirit of Ntu, shudders to life animated by outrage over a pernicious evil: the erasure of … END_OF_DOCUMENT_TOKEN_TO_BE_REPLACED

No one can accuse Dave Douglas of pandering to mainstream interests. Among his primary inspirations for Secular Psalms is the Ghent Altarpiece (a.k.a. The Adoration … END_OF_DOCUMENT_TOKEN_TO_BE_REPLACED

For those who love low woodwinds, Brian Landrus has become a steadfast champion. Few musicians this side of Harry Carney have specialized in bass clarinet … END_OF_DOCUMENT_TOKEN_TO_BE_REPLACED