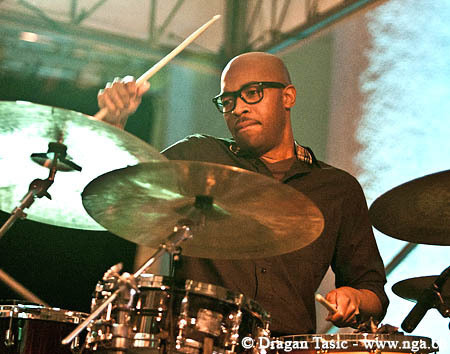 Eric Harland’s first album as a leader may put people in mind of Horacee Arnold’s 1974 classic Tales of the Exonerated Flea. The parallels admittedly aren’t perfect: The Arnold album was his second, was done in the studio (Harland’s was recorded live over several days in France), featured entirely new material (some that’s on Harland’s has been recorded before), and involved more rising-star sidemen than the four filling out Harland’s quintet. But this is another case of a brilliant, much-in-demand drummer in his mid-30s seizing the reins for a powerful album of his own, one both adventurous and accessible.

Joining Harland are Walter Smith III on tenor sax, Julian Lage on guitar, Taylor Eigsti on piano and Harish Raghaven on bass-all, like Harland (and Arnold), respectful of jazz tradition without being straitjacketed by it. The compositions are mostly Harland’s, the exceptions being a swinging cover of Sam Rivers’ “Cyclic Episode” and Eigsti’s four-part “Get Your Hopes Up.”

The album opens with “Treachery,” a burner whose treacherousness emphasizes these musicians’ virtuosity, as it had when Harland recorded it in 2007 in a collaborative all-star quartet at Monterey. “Development,” heard previously with the SFJAZZ Collective, has a chipper, similarly tricky head and one of Eigsti’s best solos. Lage’s guitar work and some of Harland’s finest drumming give “Voyager” an African feel. “Turn Signal” and “Eclipse” both slow things down initially to ballad-like tempos before picking up steam. And Harland stitches his own compositions together with three drum intermezzos, the most riveting of them lasting nearly eight minutes.

The musicians complement one another marvelously (it helps that Lage and Eigsti have worked together extensively). Lage’s prodigious chops give the proceedings a Metheny-esque feel in places, and Harland essentially solos even when he’s keeping time. It’s fresh, powerful stuff that ideally they’ll build on.

Vocalist Naima Shamborguer has been an illuminating presence on Detroit’s jazz scene for decades, elevating standards with her richly textured voice and classically trained ear. … END_OF_DOCUMENT_TOKEN_TO_BE_REPLACED

Aaron Seeber’s cymbals don’t mix—at least not in this mix. As presented in audio by the drummer himself and co-producer Kevin Sun, the ride and … END_OF_DOCUMENT_TOKEN_TO_BE_REPLACED

With the exception of certain legends like J.J., Kai, and Big T, trombonists tend to be the consummate outsiders of jazz; they know the rules … END_OF_DOCUMENT_TOKEN_TO_BE_REPLACED