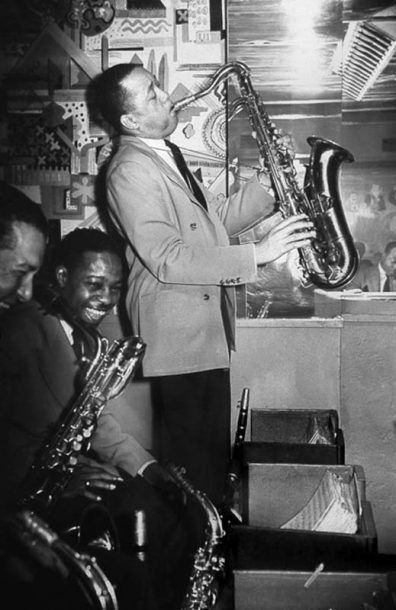 It’s a universally acknowledged truth that great music never sounds out-of-date, and Count Basie is remarkably evergreen. His “Old Testament” band epitomizes the big-band swing era-the rhythmic, harmonic and melodic devices that made 1930s America dance. But in practice that band epitomizes swing itself. “Count Basie took the Kansas City blues and made it happy,” Tony Bennett once remarked, perhaps summing up the enduring appeal that makes a collection like the eight-CD Classic 1936-1947 Count Basie and Lester Young Studio Sessions the Lord’s work.

And that’s without even mentioning Lester Young, Basie’s tenor saxophonist during his glory years. He’s not just timeless-he’s still downright progressive, still pointing the way forward for the tenor tradition. Sleek, lyrical and at once muscular and lightweight, Young’s sound was revolutionary when it first appeared on the 1936 session by Jones-Smith Incorporated (a Basie/Young small group) that begins this Mosaic box. On the 1947 bebop-ified quintet date that closes it, Prez still seems to know something his bandmates don’t: His laidback slyness on “Tea for Two” says to his juiced-up bandmates, as pointedly as words, “Relax, fellas. We got this.”

Whereas Mosaic Records’ boxes tend toward very specific archival presentations-other recent releases include Gerry Mulligan’s The Emarcy Sextet Recordings and The Complete Dial Modern Jazz Sessions-Classic Studio Sessions is an everything-but-the-kitchen-sink affair. It does take as its centerpiece the Basie Orchestra’s 1936-39 Decca recordings, the leader’s first and still largely his most famous, and includes the alternate takes plus a previously unissued one of the classic “Honeysuckle Rose.” But these constitute only 68 of the mammoth set’s 173 tracks. The rest of the box comprises the Jones-Smith session; the famous Kansas City Six and Seven (more small-group Basie/Young) dates of 1938 and 1944; the Basie trio records issued as “Basie at the Piano”; several scattered Young freelance dates, including work with Benny Goodman, Una Mae Carlisle, Sam Price and Dicky Wells; and more than 50 tracks under Young’s own name, leading various ensembles between 1942 and 1947. The music is canonical, and the remastering is as bright and clean as 80-year-old recordings can be.

These, too, include the alternate takes, and again there are a handful of unheard ones-namely, three of the four tunes from the Jones-Smith date. The previously released “Lady Be Good” from that day is one of Young’s most heralded solos, an example of how much brawn he could flex within that nonchalance. The alternate is equally revelatory, not as lean in its phrasing but every bit as steeped in lyricism and rhythmic horsepower, even as each note still floats away.

As always, Mosaic’s production is superlative. The music-parsing liner notes by Loren Schoenberg are sharp-eared and insightful. The sequencing, though, is a mess. Why start with Jones-Smith, fill the first disc with freelance odds and ends from years later, then go back to the beginning of the Basie Orchestra sides and continue chronologically from there? It doesn’t leave the Basie or the solo Young sides uninterrupted; both have Kansas City Six cuts, among others, coming in the middle. But this is the iTunes era: Buy Classic Studio Sessions, import it and reorder the tracks as you will.

Milton “Brew” Moore once opined that “Anyone who doesn’t play like Pres is wrong,” but he later realized the limitations of such a position and … END_OF_DOCUMENT_TOKEN_TO_BE_REPLACED

Since February 2022, when Russia invaded its neighbor Ukraine, we’ve received fresh reminders of the horrors and atrocities of war. So it’s timely that the … END_OF_DOCUMENT_TOKEN_TO_BE_REPLACED

From their name to their album title and the dedications of the compositions within, WeFreeStrings takes inspiration from fearless activists. The album’s title track is … END_OF_DOCUMENT_TOKEN_TO_BE_REPLACED