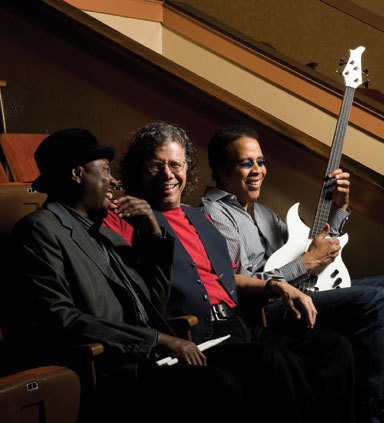 With his 70th birthday looming on June 12, Chick Corea may seem a long shot to unearth the mythical Fountain of Youth. But the overall excellence of his seemingly nonstop music-making suggests he knows a secret or two about the keys to remaining perpetually vital and vigorous.

In the first five months of 2011 alone, he has toured Australia with his expanded Return to Forever IV band, toured North America and Europe with longtime foil Gary Burton, and performed solo gigs in Europe and Africa. During this same time span, Corea did three retrospective concerts in January of his (newly rearranged) music with the Wynton Marsalis-led Jazz at Lincoln Center Orchestra, and three duo shows with Italian piano phenom Stefano Bollani. He also composed for an upcoming album with Burton and a string quartet. It doesn’t seem too far-fetched, then, that this tireless jazz-and-beyond dynamo could launch a new project in the time it takes you to read this magazine.

With such a constant (and constantly high) level of productivity, it’s not surprising that Corea’s recorded output is lagging a few years behind him. But when music sounds as fresh and imaginative as the eight live recordings from 2009 that open Forever, time simultaneously flies and stands still. The album’s title pays homage to the all-acoustic 1973 trio edition of Return to Forever, whose co-founders-bassist Stanley Clarke and drummer Lenny White-rejoin Corea here in an acoustic trio format for the first time in nearly four decades (and just a year after RTF’s 2008 electric reunion tour with guitarist Al Di Meola).

The results are inspired, as Corea, Clarke and White play with near-telepathic empathy and a remarkable blend of ingenuity and emotional depth. Steeped in tradition, the selections date back decades, from Thelonious Monk’s knotty “Hackensack” and Bill Evans and Gene Lees’ sublime “Waltz for Debby,” to such Corea classics as “Windows” and “No Mystery.” But each composition is played in such a breathtakingly fresh way that they sound brand new. Even “On Green Dolphin Street,” with White providing tasteful brush work as Corea and Clarke soar ever higher, is made anew.

White’s drumming, which tended to be overly busy in RTF’s heyday, provides a pulse that is felt as much as heard on these live tracks. His restraint allows greater freedom for Clarke and Corea, whose lithe ensemble work and sparkling solos are marvels of musical invention. The pianist’s subtle allusion to the motif from “The Way You Look Tonight,” which he employs as a brief but recurring theme in “Waltz for Debby,” is but one example of his sublime artistry.

Forever also includes a 10-song bonus disc featuring one equally stellar live acoustic trio piece, “500 Miles High” (from RTF’s seminal second album, 1972’s Light as a Feather). The remaining nine tracks are from a 2009 rehearsal for a Hollywood Bowl show by the trio, which is augmented by guest vocalist Chaka Khan, original RTF guitarist Bill Connors and French violin star Jean-Luc Ponty. The bonus disc has some memorable moments, including a propulsive version of the samba-fueled “Captain Marvel” (the Corea-penned title track of Stan Getz’s classic 1972 album) and “Armando’s Rhumba,” a 1976 gem by Corea that is elevated by a buoyant Ponty and Clarke’s splendid pizzicato solo.

But the other RTF-era cuts here sound dated and constricted, perhaps because they are written and performed in a tightly wound fusion style that affords the music little opportunity to breathe. Indeed, the acoustic version of “Señor Mouse” on the first disc is so much more resourceful and rewarding than the tick-tock, amped-up version on disc two that the electric version simply sounds dated.

Does the weird title of trumpeter Nate Wooley’s second outing with his Columbia Icefield quartet suggest a departure from the icy, atmospheric beauty of their … END_OF_DOCUMENT_TOKEN_TO_BE_REPLACED

Like most aspects of American commerce, jazz marketing has become fixated on branding. Every album needs a backstory, a peg beyond the music. Case in … END_OF_DOCUMENT_TOKEN_TO_BE_REPLACED

Art Hirahara is a true thinker and seeker. Over the course of seven previous leader dates on the Posi-Tone imprint, this pianist has made his … END_OF_DOCUMENT_TOKEN_TO_BE_REPLACED

The title of this album, and the title of its first track, “Jade,” announce a clear shift in focus for vibraphonist Sasha Berliner from her … END_OF_DOCUMENT_TOKEN_TO_BE_REPLACED