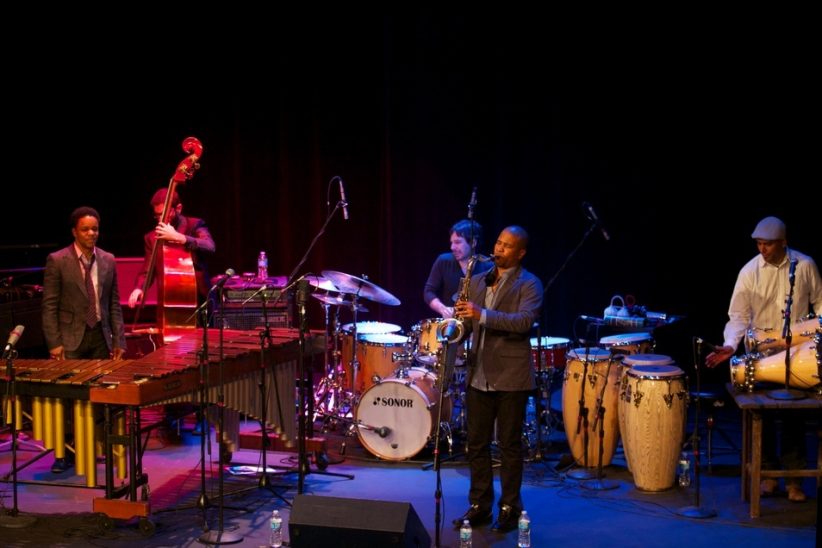 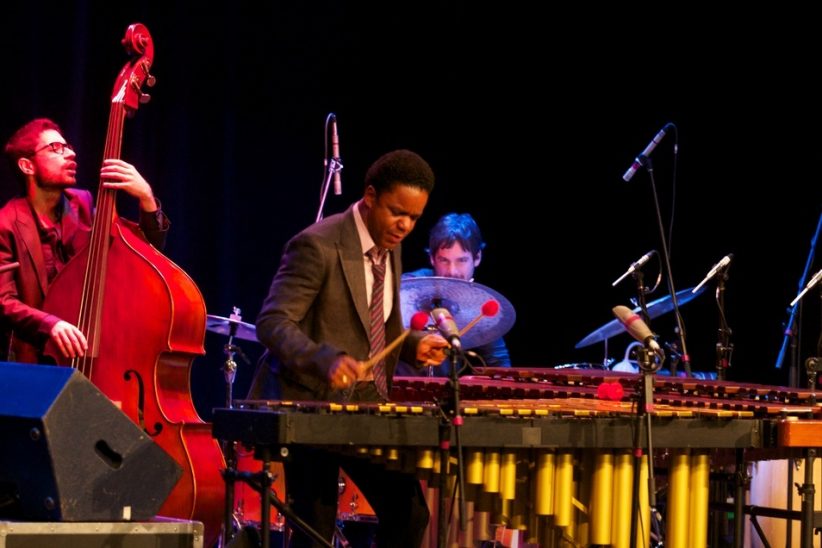 Stefon Harris and David Sánchez began their exciting musical collaboration almost three years ago with Ninety Miles, their joint musical diplomacy in Cuba. As Ninety Miles played its most recent series of U.S. concert gigs in late 2012, the Harris-Sanchez enthusiasm rolled through concert hall crowds that reacted with their own enthusiasm. Harris and Sanchez and their touring group won two standing ovations from the filled auditorium at the University of Wisconsin-Madison. The ovations were deserved, the concert was remarkable, and the performances of Harris and Sanchez were sensational.

The Ninety Miles concerts evolved out of the acclaimed Ninety Miles and Ninety Miles Live at Cubadisco albums created in a one-week period in 2010. Harris and Sanchez, outstanding players on vibraphone and tenor sax, respectively, traveled to Havana with trumpeter Christian Scott. The young American jazz titans worked in Cuba with the groups of Harold Lopez-Nussa and Rember Duharte. Lopez-Nussa and Duharte are hugely talented young pianists and composers virtually unknown in the United States.

Harris and Sanchez are playing with a different cast of musicians now. American tours have provided the opportunity to reconfigure the Ninety Miles Project music with U.S. Latin jazz players. The “original cast” played one concert in Havana. The U.S. tour group is highly talented but not, of course, the Cuban musicians with whom Harris, Sanchez and Scott made their breathtaking music in Havana. For people very familiar with the music, comparisons are inevitable.

“And This Too Shall Pass,” “E’Cha,” “The Forgotten Ones” and “Brown Belle Blues” were all stretched beyond 20 minutes each for the Madison audience. An encore not associated with the Ninety Miles book wrapped the two-hour show.

Harris’ “And This Too Shall Pass” started the set with a totally redesigned opening. Percussionist/vocalist Mauricio Herrera, a Cuban native now in New York, began with an extended solo and chant before the song’s familiar trumpet call. Nicholas Payton has taken Scott’s frontline trumpet spot on recent Ninety Miles gigs. Scott brings a more melodic approach to his trumpet solos, but Payton is a noted player who gives the music a different sound. It isn’t better or worse, just different.

“E’Cha” was composed by Lopez-Nussa. His enthusiastic piano playing was missed on the set’s first two songs. Prominent New York leader and sideman Edward Simon filled the roles played by Lopez-Nussa and Duharte in Havana, but the tour piano was less pronounced than the keyboard playing on the Cuban originals.

“The Forgotten Ones,” the haunting Sanchez composition dedicated to the New Orleans victims of Hurricane Katrina, was stretched to four times its original length but was still highlighted by the composer’s tenor and beautiful vibraphone chords.

“Brown Belle Blues,” a Harris masterpiece, swung the theater for almost 30 minutes. Harris’ prodigious approach to the vibraphone/marimba is simply astonishing. The arrangement gave Payton an opportunity to open up and the rhythm section of Simon, Herrera, drummer Henry Cole and bass player Ricky Rodriguez all took solos; at one point it appeared each was contributing separately to the polyrhythms.

This writer looks forward to the day when Harris and Sánchez can be reunited with the original Cuban cast here in the States. Meanwhile, Harris hints they are looking for countries somewhat farther away where the Ninety Miles concept could be tried. Considering the enthusiasm that Harris and Sanchez bring to their joint music efforts, musicians in other countries should be ready and willing to be part of the project.

Recorded in summer 2019 in France, after the release of their album Chapters, Kneebody’s Live at Le Crescent follows 11 albums of jazz/hip-hop/rock frolics sweetened, … END_OF_DOCUMENT_TOKEN_TO_BE_REPLACED

In the early ’70s, Freddie Hubbard was paralleling Miles Davis in going electric and funky. Unlike Miles, though, Hubbard’s recordings were increasingly defined by his … END_OF_DOCUMENT_TOKEN_TO_BE_REPLACED

Milton “Brew” Moore once opined that “Anyone who doesn’t play like Pres is wrong,” but he later realized the limitations of such a position and … END_OF_DOCUMENT_TOKEN_TO_BE_REPLACED

Since February 2022, when Russia invaded its neighbor Ukraine, we’ve received fresh reminders of the horrors and atrocities of war. So it’s timely that the … END_OF_DOCUMENT_TOKEN_TO_BE_REPLACED