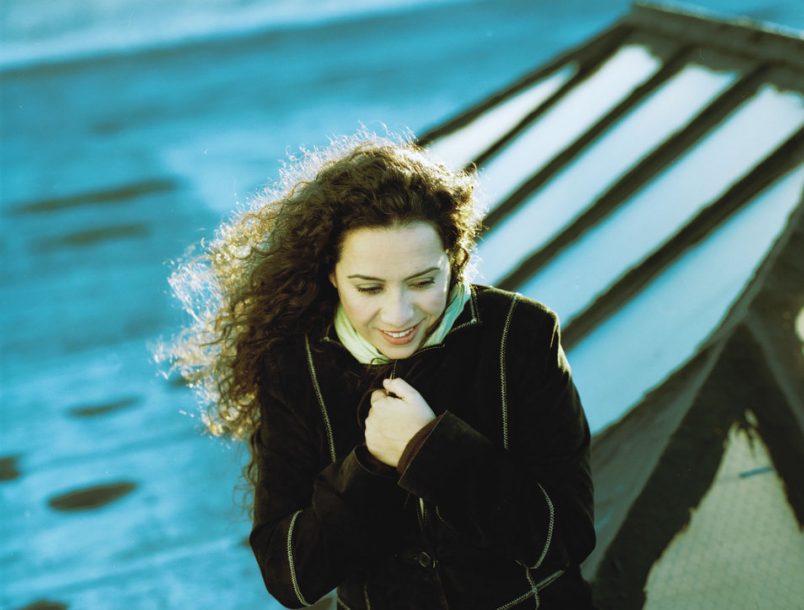 It seems Claudia Acuna took the long way to St. Louis. After nearly a decade in the U.S. and a pair of widely praised albums for Verve, the South American singer has landed at Missouri-based MaxJazz and delivered the intoxicatingly beautiful Luna. Ironically, her Midwestern sojourn for her third disc as leader seems to have brought her closer to her Chilean roots.

Her two Verve outings-Wind From the South and the more recent Rhythm of Life (executive produced by Tommy LiPuma)-were, understandably, shaped to make her as palatable as possible to North American audiences. Presented alongside Acuna’s soaring interpretations of such indigenous fare as “Gracias a la Vida,” “Viento del Sur” and “Volver a los Diecisiete” were her awkward hit-and-miss attempts to nail such standards as “Bewitched,” “Nature Boy” and “I Fall in Love Too Easily,” all handicapped by an extremely limited appreciation for their English lyrics. The elegant sparseness of the earlier album (just piano, bass and drums with occasional guest flourishes from the likes of David Sanchez and Avi Leibovich) suited Acuna’s velvety voice. The comparative grandiosity of Rhythm of Life, with Acuna backed by various combinations of stellar sidemen, including such A-listers as Dave Holland, Jeff “Tain” Watts, Romero Lubambo and Billy Childs, and dressed up with plenty of those stylish LiPuma touches, tended to overpower her delicate instrument.

Wisely, the folks at MaxJazz left production duties for Luna solely in the hands of Acuna and her longtime pianist Jason Lindner. Even more wisely, they’ve allowed her to luxuriate in more comfortable surroundings, performing almost exclusively in her native language in an appropriately lush yet unobtrusive quintet setting. Of the 11 tracks that fill Luna, only two are performed in English. Both are new compositions, written expressly for her by Lindner. The balance of the album extends from the cozy ebullience of Mexican composer Armando Manzanero’s “Esta Tarde vi Llover” (likely better known to most listeners as “Yesterday I Heard the Rain” with Gene Lees’ English lyric) and the hypnotic warmth of “Arrimate Mi Amor” to the gentle turbulence of “Oceano” and the urgent sensuality of the Acuna-and-Lindner penned “Carita de Luna.”

Luna is, says Acuna in the far-too-brief liner notes, meant to define “a journey with many stories to tell.” As such, it succeeds gorgeously, providing the fiery chanteuse with her most accomplished session to date.

Any recording that contains a track titled “Rewind Fee” has a substantial bit of throwback in its spirit, and that’s the case with Spider Season, the … END_OF_DOCUMENT_TOKEN_TO_BE_REPLACED

You want to get the word about Bird? Sheila Jordan, doyenne of jazz singers and 93 years young, continues to share the gospel of bebop, … END_OF_DOCUMENT_TOKEN_TO_BE_REPLACED

Prolific bass player Billy Mohler enjoys the best of two disparate worlds. In one, the L.A.-based multi-instrumentalist is a Grammy-nominated sessioneer who’s played with Lady … END_OF_DOCUMENT_TOKEN_TO_BE_REPLACED

Would it be overpraising Tom Harrell to describe his long recording career as practically peerless? Album after album, sometimes year after year, the Midwest-bred trumpet … END_OF_DOCUMENT_TOKEN_TO_BE_REPLACED