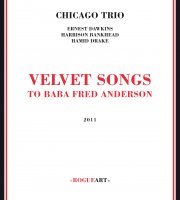 Fred Anderson passed away in June 2010, leaving behind the legacy of not only his inimitable sax playing, but also of his clubs, the Birdhouse and the Velvet Lounge, in Chicago. He was “Baba” or “Father” figuratively to many musicians, including saxophone player Ernest Dawkins and bassist Harrison Bankhead. He was “Baba” literally to drummer Hamid Drake when the two of them moved from Monroe, La., to Evanston, Ill., early in Drake’s life. #Velvet Songs# was put together in 2011, but was recorded by the trio of Dawkins, Bankhead and Drake at the Velvet Lounge in 2008. That the group sounds concurrently energetic is no surprise.

In fact, Dawkins and Bankhead have never sounded so alive. Dawkins’ performance on soprano, alto and tenor boasts melodic phrases, bluesy voices and out-of-bounds expressions. His soprano work sends poignant musical messages, especially in the opening pieces of both sessions and “Moi Tre Gran Garcon.” His solo intro on alto in “One for Fred” continues into abstractions that land in a weighted statement to close the second session. Dawkins’ whistle-blowing, bell-ringing, tapping and rattle shaking fill in details that round off edges and lend a special oomph that would be missed if the sounds were not there.

Particularly captivating throughout is Bankhead’s bass technique, which unleashes a series of bent pitches, fast-paced stroking, rhythmic displays and resonant accentual pizzicatos that penetrate the soundscape. In close collaboration with Drake on the frame drum, Bankhead artfully paints a solemn picture on cello in “Peace and Blessings (to Fred),” using staccato bowing to reach a tempo into which Dawkins marches gracefully with his soprano. And in “Moi Tre Gran Garcon,” the bassist/cellist renders an endearing introduction to Dawkins’ elegant overlay of a lullaby as Drake taps the frame drum in the shadows.

Drake has an unfathomable rhythmic source that feeds his capacity for weaving his drumming through the whole of the music. The perpetually correct placement of his strokes on the components of the drumset begs nothing but praise of their consistency.

The swinging and low-down rock- bottom gutsiness of “Down n’ the Delta,” recalling “As the Saints Go Marching In,” posits a mysterious instrumental synchronicity and the rhythm, set by the bass in “Jah Music,” invites the same kind of deep absorption of the pulse.

The Chicago Trio never steps outlandishly into untenable zones but maintains a sense of portending reverence. To be noted also is the photograph of the trio in the record cover by Downbeat‘s Michael Jackson and poet Steve Dalachinsky’s precise, inseparably pertinent liner notes.

At the age of 88, Houston Person remains a reliably consistent interpreter of song. He has never been particularly extreme or outrageous, preferring to keep … END_OF_DOCUMENT_TOKEN_TO_BE_REPLACED

Chet Baker made a number of classics throughout his brief, cruel life, but his debut vocal album, Chet Baker Sings, might be his summit. Nobody … END_OF_DOCUMENT_TOKEN_TO_BE_REPLACED

If ever there was a launchpad to immerse oneself in Canada’s creative jazz and vibrant scene, Toronto guitarist and composer Avi Granite is the ideal place … END_OF_DOCUMENT_TOKEN_TO_BE_REPLACED