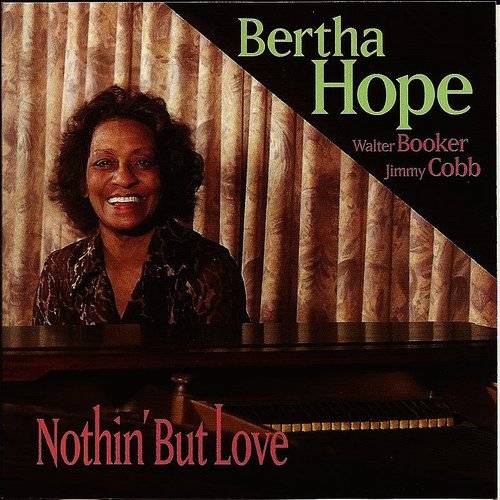 Cover of the Bertha Hope album Nothin' but Love

Nothin’ but Love, pianist Bertha Hope’s first domestic recording as a leader, is not without its flaws. Hope, a veteran musician in her mid-60s, could be more agile, pianistically speaking. Her attacks sometimes lack the precision expected in this era of technical perfection and she occasionally hesitates or falters slightly mid-phrase. As a result, the music can take on a lumbering quality instead of achieving musical flow. The other members of her trio, bassist Walter Booker and drummer Jimmy Cobb, share culpability for these and the most serious defect: the rhythmic pulse sags now and again.

That said, Nothin’ but Love has equal points in its favor, the first being interesting and unusual repertory. “Stars Over Marrakesh,” a haunting tune written by her husband Elmo (who died in 1967), weaves chromatically with an exotic lyricism. Cedar Walton’s “Ojos de Rojo” saunters by handsomely. Hope, too, shows herself to be a gifted composer with three originals: the angular “Book’s Bok”; “Prayer for Sun Ra,” a tender ballad named for her son; and “Gone to See T,” a tune styled effectively after Thelonious Monk’s work.

As she explains in the liner notes, Hope has clearly lived with—and likely inside of—this music. She may not possess the virtuosity of other players; however, her musicianship displays a straightforward, honest character that renders it heartfelt and appealing.

Vocalist Naima Shamborguer has been an illuminating presence on Detroit’s jazz scene for decades, elevating standards with her richly textured voice and classically trained ear. … END_OF_DOCUMENT_TOKEN_TO_BE_REPLACED

Aaron Seeber’s cymbals don’t mix—at least not in this mix. As presented in audio by the drummer himself and co-producer Kevin Sun, the ride and … END_OF_DOCUMENT_TOKEN_TO_BE_REPLACED

With the exception of certain legends like J.J., Kai, and Big T, trombonists tend to be the consummate outsiders of jazz; they know the rules … END_OF_DOCUMENT_TOKEN_TO_BE_REPLACED