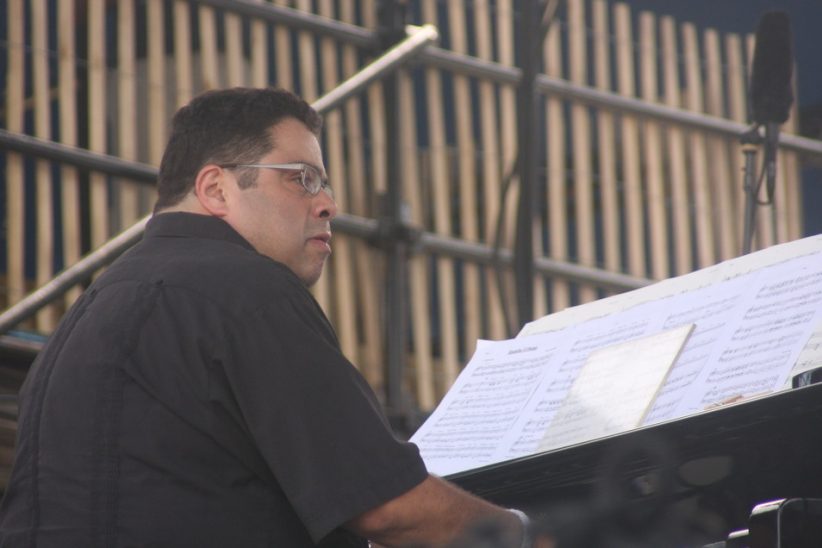 Give Arturo O’Farrill credit for guts. The 50-something leader-composer of splendid big bands and small ensembles chose to record the first solo piano record of his career in a single sitting. What’s more, he chose to record it inside a museum built by and dedicated to an artist, Isamu Noguchi, for whom O’Farrill has long felt affinity and admiration. In the promotional materials, O’Farrill also states that one of the subthemes of these performances is that “there is an unfinished quality to jazz,” and that “when I sat down to play, I kind of abandoned the game plan I had.”

Not surprisingly, the music produced under these circumstances is uneven-often brilliant, dense and ambitious, but occasionally too fitful for a truly satisfying coherence. For example, the opening piece, named “The Sun at Midnight” after a Noguchi sculpture, is a free improvisation that contains two, perhaps three, motifs that appear to be operating as free agents. And the embellishments on Randy Weston’s “Little Niles” erode some of the loping swing that is at the heart of the composition.

The highlights, however, can be spectacular. O’Farrill’s improvisation on the ’50s pop song “Once I Had a Secret Love,” retitled “Once I Had a Secret Meditation,” reveals new light and shadow and is lofted up in perfect pitch. His original composition, “Mi Vida,” is a tour de force on the tensile strength of a mature relationship; his Latin covers, of Ernesto Lecuona’s “Siboney” and Pedro Flores’ “Obsesión,” set those familiar melodies in the eye of his pianistic hurricane; and he resuscitates “Oh Danny Boy” from boozy banality. In fact, there is beauty and dazzle in most every tune. But sometimes it dashes away.

Recorded in summer 2019 in France, after the release of their album Chapters, Kneebody’s Live at Le Crescent follows 11 albums of jazz/hip-hop/rock frolics sweetened, … END_OF_DOCUMENT_TOKEN_TO_BE_REPLACED

In the early ’70s, Freddie Hubbard was paralleling Miles Davis in going electric and funky. Unlike Miles, though, Hubbard’s recordings were increasingly defined by his … END_OF_DOCUMENT_TOKEN_TO_BE_REPLACED

Milton “Brew” Moore once opined that “Anyone who doesn’t play like Pres is wrong,” but he later realized the limitations of such a position and … END_OF_DOCUMENT_TOKEN_TO_BE_REPLACED

Since February 2022, when Russia invaded its neighbor Ukraine, we’ve received fresh reminders of the horrors and atrocities of war. So it’s timely that the … END_OF_DOCUMENT_TOKEN_TO_BE_REPLACED