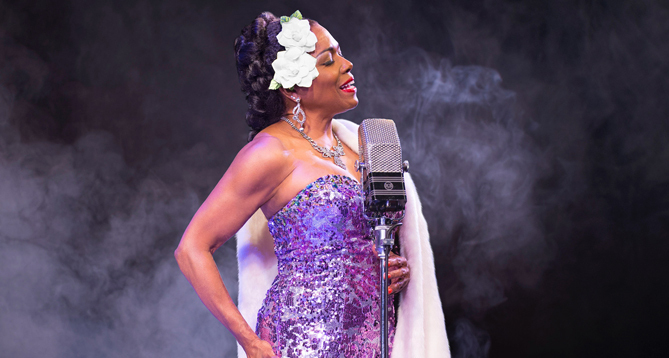 Dee Dee Bridgewater so wholly embodies her character in Lady Day, the off-Broadway musical that opened in early October and runs through mid-March, it’s nearly possible to forget that Billie Holiday is long deceased, that it isn’t her up there singing. Bridgewater painstakingly recreates Holiday’s distinctive vocal and physical idiosyncrasies and her oft-chronicled personality quirks. To put it another way, she owns the stage of Manhattan’s Little Shubert Theatre to the extent that it sometimes feels like a one-woman show; the other actors, including the excellent quartet that accompanies her, seem to disappear.

That Bridgewater is so commanding a presence shines a bright light on the other inescapable reality of Lady Day: the story, written and directed by Stephen Stahl, tends at times to become slight, telling us little about the artist that hasn’t already been told ad infinitum. The troubled singer’s tragic backstory is injected via periodic soliloquies and monologues, and while Bridgewater’s grasp of her subject’s insecurities and volatile behavior is again undeniable, those reflections often seem simplified for the benefit of a clueless audience. The tales of Holiday’s childhood and adolescence-the absentee parents, the rape at age 10, the scrounging-are often harrowing, and although Bridgewater’s sheer charisma draws her audience in, before long we just want her to cut the talking short and sing. Again, it’s a problem to blame on the book rather than on Bridgewater, a theatre veteran whose awards include a Tony for The Wiz and an Olivier nomination for a British production of Lady Day.

The show is set in a London theater in 1954. Holiday is closing out an extensive European tour, unable to work in her adopted home of New York City because her cabaret card has been rescinded due to drug arrests. Late for the rehearsal that occupies the entire first act, she finally arrives ornery and distracted, teed off that her man has left England to return to the States. She’s already decided that she won’t care for the British audience-although the seats of the old, dilapidated theater have not yet been filled. She’s annoyed at the rain and wants a drink, badly, but her road manager, Robert (David Ayers), wisely advises against it. She’s got the hots for the stage manager (Rafael Poueriet), and although she’s full of praises for her frustrated band-pianist Sunny (Bill Jolly), bassist Deon (James Cammack), saxophonist Elroy (Neil Johnson) and drummer Kelavon (Jerome Jennings)-she’s in no mood to run through the set with them yet again.

Finally coaxed into singing, Holiday is still at the top of her game: Whatever else she’s been through, the woman can always wring the emotion out of any lyric. If only she would concentrate on the task at hand-preparing for the night’s concert-and stop allowing her mind and desires to wander.

Act II is devoted to the concert, and we see a stunning sight before us-Holiday is transformed, now attired in gown and fur, her trademark white gardenia tucked into her hair. She’s happiest when she’s performing, but even now she can’t keep the demons away, lapsing into indulgence and abuse to the chagrin of her musicians. “Am I just another nigger who sings?” she harangues. It’s a train wreck of a concert, except when she gets back to the actual business at hand.

Bridgewater too seems most pleased when she’s rolling through her interpretations of the Holiday songbook, a greatest-hits package including “God Bless the Child,” “My Man” and, in the first half, “All of Me” and “Strange Fruit,” the circumstances behind the latter triggering an important if overwrought segment on Jim Crow. (“I’ve seen it and I’ve lived it,” Holiday says.)

Lady Day is such an ideal vehicle for Bridgewater-who in 2011 released the album Eleanora Fagan (1915-1959): To Billie With Love From Dee Dee-that it’s impossible to imagine any other artist inhabiting the role. It’s easy to overlook the flaws inherent in the book and just surrender to her.

For those who love low woodwinds, Brian Landrus has become a steadfast champion. Few musicians this side of Harry Carney have specialized in bass clarinet … END_OF_DOCUMENT_TOKEN_TO_BE_REPLACED

Vocalist Naima Shamborguer has been an illuminating presence on Detroit’s jazz scene for decades, elevating standards with her richly textured voice and classically trained ear. … END_OF_DOCUMENT_TOKEN_TO_BE_REPLACED

Aaron Seeber’s cymbals don’t mix—at least not in this mix. As presented in audio by the drummer himself and co-producer Kevin Sun, the ride and … END_OF_DOCUMENT_TOKEN_TO_BE_REPLACED