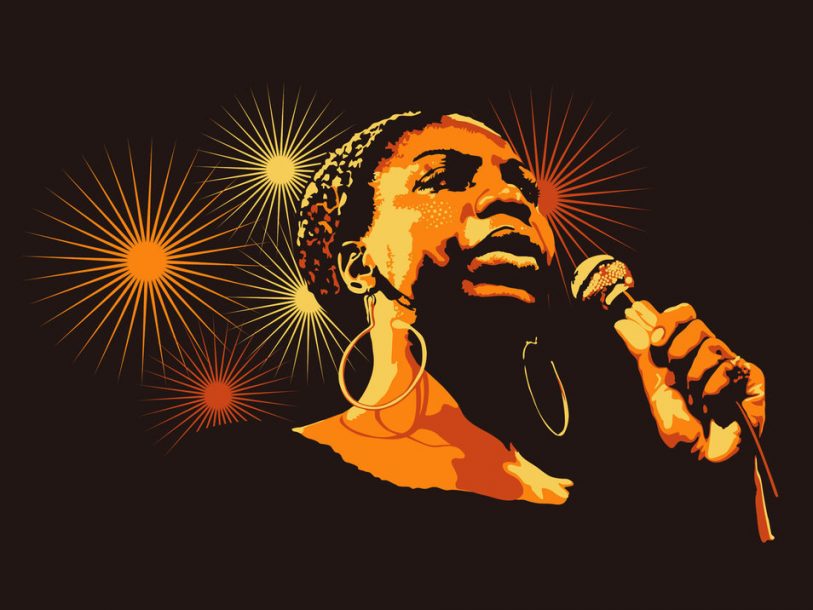 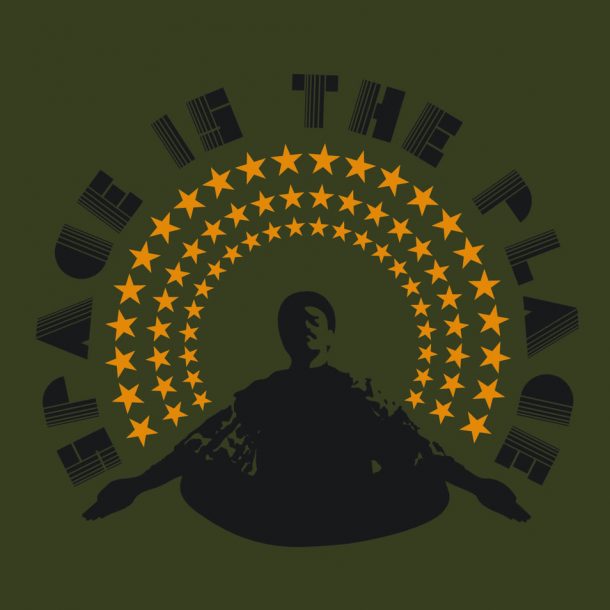 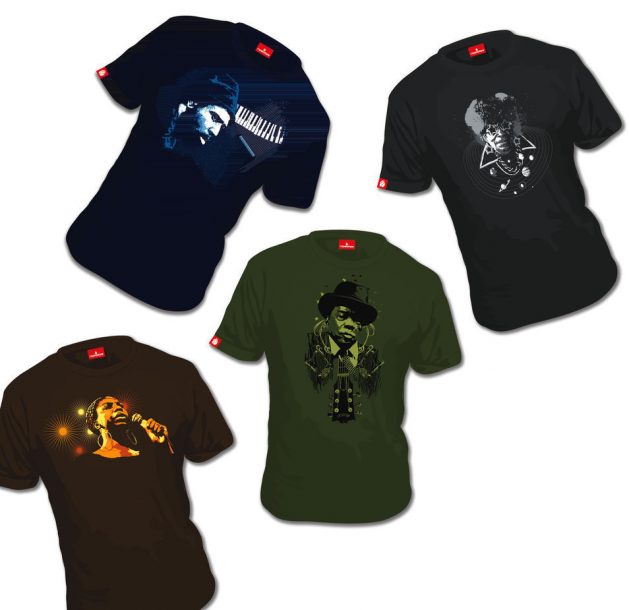 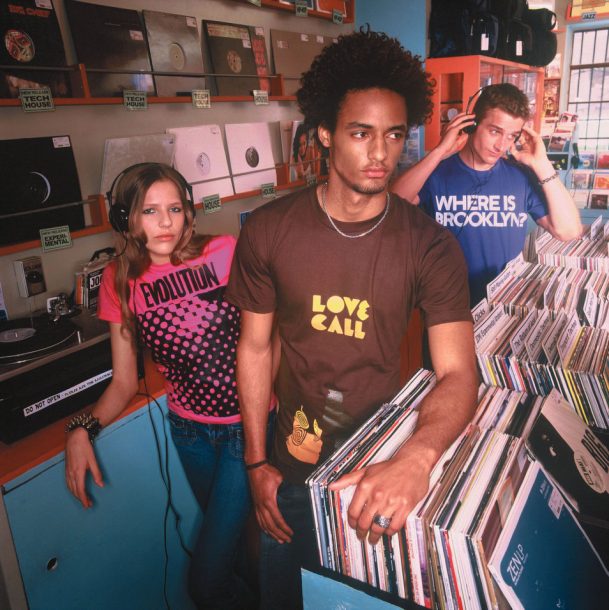 Summertime is here, and it’s time to get out that funky fresh gear and rock it like nobody’s business. For all you metrosexual jazzheads, there are plenty of natty jazz-inspired T-shirts to peacock around in. Hip clothing manufacturers such as Soul Rebel, Ubiquity and Ropeadope Industries are elevating the game of jazz-inspired fashion design, putting them on par with upscale urban outfitters, such as Von Dutch and Paul Smith, by fancying top-quality soft cotton, fitted cuts and eye-catching graphics.

“T-shirts have become such a staple in menswear,” says Wayne Pate, owner and graphic designer of Soul Rebel. “There are so many stores that base most of their business worldwide on T-shirts.”

Launched in 1998, Soul Rebel was one of the first to raise the bar on jazz-inspired T-shirts through Pate’s keen awareness of expressive typography, visual recontexualization and rich color schemes. In addition to his signature design, “The Color of We,” an ingenious improvisation on the ’70s PBS logo, Pate saluted four of his musical heroes: Miles Davis, John Coltrane, Fela Kuti and Bob Marley upon Soul Rebel’s inception. “I wanted to start by making a direct connection without being too obscure or indirect with imagery,” Pate says.

Pate sees Soul Rebel as not only urban chic but also as subversive educational tools for music history, lifestyles and cultures. “Some people might not necessarily get the direct connection through simply listening to jazz or Afro-Cuban music or whatever, but they can sometimes make the connection through the images. That’s been one of my accomplishments in making people more aware of music cultures beyond pop.”

Soul Rebel has since discontinued those initial T-shirts in favor of even more inventive artistic expressions. Pate says that he wanted to push himself as a graphic artist much the same way those musicians pushed their artistry by challenging conventions. “I don’t think it’s fair to just rely on making a name for yourself by just using someone else’s images,” he says. “It serves a purpose to an extent, but then you have to move away from that.” Recent Soul Rebel designs such as “Radio Nigeria” and “Keep It Steady” reveal a more adventurous approach to geometrical graphics, iconic imagery and rich coloring.

As for jazz, Soul Rebel’s recent “Space Is the Place” shirt is a ubiquitous favorite: Pate juxtaposes the memorable image of Pharoah Sanders (from his classic 1969 LP Karma) with the famous Sun Ra catchphrase. With its striking arc of chocolate lettering and three rows of white stars against a soft pink backdrop, the design is the graphic equivalent of a jazz remix. “Some people who don’t know me easily assume that I’m an idiot, because I have an image of Pharaoh Sanders and I’m using the Sun Ra title,'” Pate laughs. “I felt that Pharoah Sanders was such a stronger image for the title than just trying to take some image of Sun Ra.”

For all of his visual flamboyance though, Sun Ra does make for a vivid image-a fact from which Ropeadope Industries and Ubiquity have benefited greatly with their T-shirts. Ropeadope’s “Ra Metaphysics” design fancies a charcoaled etching of Sun Ra wearing star-shaped glasses (a la Bootsy Collins) with various planets revolving around his collar, while Ubiquity picks up on the solar motif in Sun Ra’s name, elegantly framing his yellow-etched face in sunburst rays against a luminous red backdrop. Both designs function as artful tributes. “It’s our artistic representation of him,” says David Wurtzel, CEO of Ropeadope Industries. “‘Ra Metaphysics’ goes back to our ‘Stand Strong’ philosophy. Our shirts are really about people who were true to themselves in defining their own lives and transcended their own little niche into something greater.”

Sun Ra isn’t the only common denominator among Soul Rebel, Ropeadope Industries and Ubiquity. All three clothing designers are steeped heavily in DJ culture, which pushes imaginative graphic art (T-shirts, CD artwork and event flyers), and the companies recognize the cozy relationship fashion and music have always shared. “If you take any popular form of music, it always had a subculture that came out of it,” Pate says. “And fashion always has reflected that. Every music genre and era has had its own dress code. Even today, especially in places like Japan and London, music is represented on the street by the way people dress, from soul boys, who are totally into Northern Soul, to scooter boys, who are totally into mod and ska.”

Because Ropeadope Industries and Ubiquity’s T-shirt division are spinoffs from parent record companies thatcater to R&B, electronica and hip-hop musicthat infuse a jazz sensibility, that vibe shines through in their wearable merchandise. T-shirts such as “California Soul” and “Conga Fever,” from Ubiquity’s sister-labels CuBop (Latin jazz) and Luv N’ Haight (rare R&B), capture the moods and geographical origins of those idioms. In addition to Ropeadope’s own T-shirts, which include tributes to Nina Simone, Marvin Gaye, King Tubby and Gandhi, the company has recently partnered with Blue Note to launch a series of tees based on the label’s iconic album covers. So rather than using photos of artists such as Horace Silver or Art Blakey, Ropeadope and Blue Note decided to emphasize the influential artwork of Reid Miles by using the titles of Larry Young’s Unity, Art Blakey’s Indestructible and McCoy Tyner’s The Real McCoy, among others.

“I think a lot of the old jazz T-shirts are just pictures of Coltrane that say ‘Coltrane,'” says Zach Hochkeppel, Blue Note’s director of marketing. “That’s cool, but it’s kind of obvious. In ours, we were much more subtle about it. [Graphic titles] like ‘The Real McCoy’ and ‘Evolution’ worked out outside of their direct reference. You don’t have to know that they’re Blue Note records. They’re just very strong graphics that work all by themselves.”

Ropeadope Industries and Blue Note will initially market these shirts on the Internet and at various small independent record stores. “We’re really going to focus on independent retail before going to something like Urban Outfitters,” says Hochkeppel. “We want this line to become really hip before it ends up like Coca-Cola clothing or something. I think people will really dig it, but if you put it in their face too much, it’ll kind of take away the cool part.”

The least-known persons on the stage on Oct. 29 at the Kodak Theatre in Hollywood were a trio of young trumpet players: Jean Gaze from … END_OF_DOCUMENT_TOKEN_TO_BE_REPLACED

There are important jazz musicians who are more talked and read about than actually heard, and one is Albert Ayler. He did not record extensively. … END_OF_DOCUMENT_TOKEN_TO_BE_REPLACED

There’s something about cities that have distinct musical traditions within them,” says Aaron Levinson, producer of The Harlem Experiment. “It’s not an accident.” With both … END_OF_DOCUMENT_TOKEN_TO_BE_REPLACED

Marchel Ivery, a tenor saxophonist based in the Dallas area, died in his hometown on October 30th after a short illness. He was 69. Although … END_OF_DOCUMENT_TOKEN_TO_BE_REPLACED