Skip to content
Become a member and get exclusive access to articles, live sessions and more!
Start Your Free Trial
Home > News > The Immeasurable Sun Ra 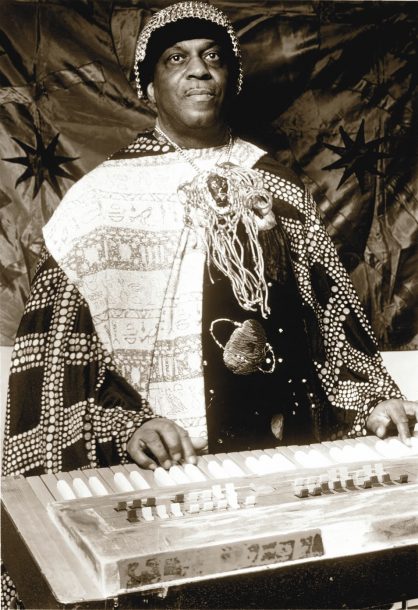 Sun Ra’s passion for words was no secret. His mythic lyrics played a huge role in his music, and his aphoristic proclamations (“History is his story; my story is mystery!”) are still quoted frequently. But he was also an extremely prolific poet. Between 1972 and 1995, over 20 editions of his poetry were published, many under the title The Immeasurable Equation. In the late ’90s, Ra scholar James Wolf set out to collect and transcribe this sprawling oeuvre, with the help of submissions from around the globe. Wolf and German Ra historian Hartmut Geerken have published the results as The Immeasurable Equation: The Collected Poetry and Prose, through Geerken’s Waitawhile imprint.

“What’s so striking is the consistency of Sun Ra’s anti-poetical style,” Wolf says. “He was trying to do something different with these poems, not aiming to write ordinary poetry at all.” Ra’s verse covers many of the same concerns as his songs–fate, the future, nature and the Cosmos–but his approach is markedly different. Where Ra’s lyrics were often short and simple, his poems are less concrete. Philosophical musings and ethereal abstractions take the place of traditional poetic symbols and imagery. “Often his approach when he’s describing something is to talk about what it is not,” Wolf says. “He was very concerned about reversing and undoing oppositions, and he often expressed his philosophy in roundabout or sideways terms.”

The wealth of accompanying information included in The Immeasurable Equation is nearly as fascinating as Ra’s poetry. Wolf provides an extensive bibliography of Ra’s numerous literary influences (Napoleon Bonaparte, Carl Jung, Amiri Baraka, W.E.B. DuBois and Edgar Allan Poe to name but five), eloquent essays from scholars like Geerken and Brent Edwards and an index of where each poem was originally printed. Many poems appeared in multiple publications and often in varying forms, all of which Wolf endeavored to include. “It’s interesting how much some of his poems vary, how much he would revise them,” Wolf says. “Almost everything he wrote, he would revise.”

While more poetry may be tucked away in the Arkestra’s house in Philadelphia, or spread out among individual collections, The Immeasurable Equation is still a monumental feat, a massive portrait of a singular literary artist. “Many Sun Ra fans don’t know about this poetry, or at least it’s not discussed much,” Wolf says. “I really believe that he’s as significant a thinker as he was a musician.”

The least-known persons on the stage on Oct. 29 at the Kodak Theatre in Hollywood were a trio of young trumpet players: Jean Gaze from … END_OF_DOCUMENT_TOKEN_TO_BE_REPLACED

There are important jazz musicians who are more talked and read about than actually heard, and one is Albert Ayler. He did not record extensively. … END_OF_DOCUMENT_TOKEN_TO_BE_REPLACED

There’s something about cities that have distinct musical traditions within them,” says Aaron Levinson, producer of The Harlem Experiment. “It’s not an accident.” With both … END_OF_DOCUMENT_TOKEN_TO_BE_REPLACED

Marchel Ivery, a tenor saxophonist based in the Dallas area, died in his hometown on October 30th after a short illness. He was 69. Although … END_OF_DOCUMENT_TOKEN_TO_BE_REPLACED