Skip to content
Become a member and get exclusive access to articles, live sessions and more!
Start Your Free Trial
Home > News > Sun Ra’s Space is the Place: Bad and Beautiful 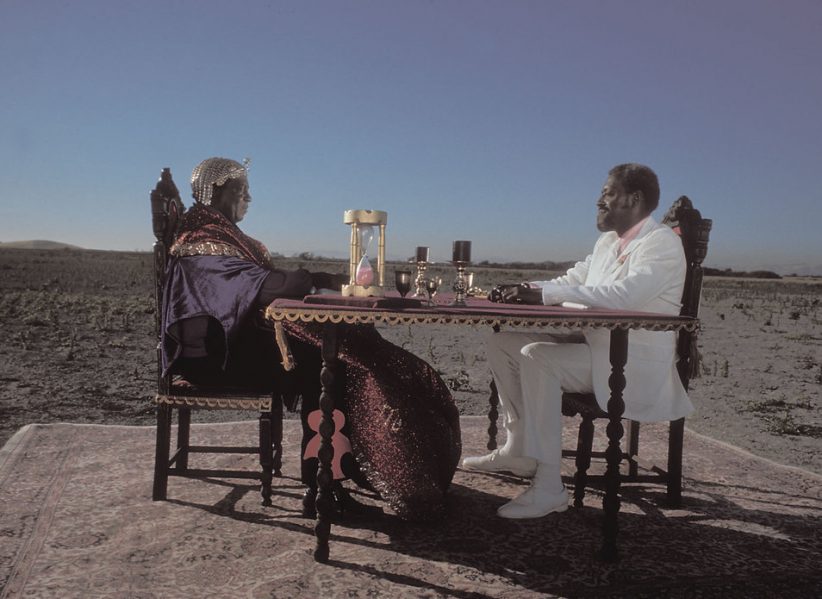 Sun Ra in Space is the Place

Believe it or not, there is a movie that spent less time on theater screens than the 1987 Bill Cosby vehicle Leonard, Part 6. Space Is the Place, a 1974 film starring yours and my favorite Saturn-born jazz pianist, Sun Ra, landed in and flew out of theaters quicker than it might have taken say, Skitch Henderson, to leave a live Sun Ra Arkestra performance.

Despite its laughable dialogue, amateurish special effects (even for 1974) and a plotline that makes Pulp Fiction’s seem linear by comparison, Space Is the Place is a charmer of flick-a cult classic and a must-see for any Sun Ra fan who hasn’t already been initiated.

And I fear we could have lost it.

Though the movie escaped obscurity in the 1990s when it was finally issued on VHS, most neighborhood video stores didn’t keep it on their shelves-and videotape is so last millennium. Had a new, vibrantly colorful print of the film not come out on DVD late last year, we might have soon lost proof that someone had actually negotiated a common ground between the ’50s sci-fi cheese of The Day the Earth Stood Still, the blaxploitation funk of The Black Godfather and, no joke, Ingmar Bergman’s artsy The Seventh Seal. The DVD (out via Plexifilm) skimps on the extras compared to other discs, but does include an interview with producer Jim Newman and director John Coney as well as a glimpse at some of the Arkestra’s home movies, plus more than 20 minutes of restored footage that didn’t make the VHS cut.

Made with a typically Ra-like low budget of around $350,000, the film was conceived and funded by folks outside of Sun’s camp. But they used the bandleader’s supposed outer-space heritage for the premise for the movie: Ra lands his spaceship in early ’70s Oakland, Calif., to save blacks from what he says are “planet Earth’s sounds of guns, anger and frustration.” He plans to gather recruits via his Outer Space Employment Agency and “see what [blacks] can do with a planet all their own, without any white people there.” The black-power driven plot was evident in the film’s previous edit, but the DVD’s restored scenes bring its political message into clearer focus. Still, this is Sun Ra, not Spike Lee-it ain’t that clear. Just like a mid-’60s Sun Ra Arkestra album, half the fun of watching Space Is the Place is trying to figure just what the hell is going on and why.

“The film was always conceived as a romp and a bit of a parody, with Sun Ra’s myth and statements as a serious counterpoint-all the better to get a broad audience to experience his musical genius,” says Coney. “I’ve spent a career making heavyweight documentaries for television, answering to platoons of scholars and expert advisors anxious for authenticity and a rational script where ‘B’ follows ‘A.’ What an inspiration to conceive and direct a film that compounds logic and illogic! It’s a hoot to cut to the chase and then back out of the chase.”

Like the best cult films, Space Is the Place’s cinematic shortcomings are its winning charms. And anyway, it’s less a moviegoer’s movie and more a Technicolor tour of Ra’s philosophy. Apparently that’s what Ra wanted. “I have always felt that Sun Ra viewed the film as an honest and persuasive distillation of his cosmic view,” says Newman. “I recall sitting in on screening sessions with him. The mood was always positive and approving. In phone conversations that occurred in the few years following its completion, he did express yearnings that the film have more beauty, but it was unclear to me what he meant by that.”

Newman ought not to wonder too much about that. What Sun Ra meant by anything he said or did remains the central question in studying his body of work. And like any other chapter in the Book of Ra, Space Is the Place underscores the notion that Sun Ra was vague by his own design. He puts it best himself in the film, as he explains to a group of black youths he hopes to take home to Saturn: “I do not come to you as a reality; I come to you as a myth.”

The least-known persons on the stage on Oct. 29 at the Kodak Theatre in Hollywood were a trio of young trumpet players: Jean Gaze from … END_OF_DOCUMENT_TOKEN_TO_BE_REPLACED

There are important jazz musicians who are more talked and read about than actually heard, and one is Albert Ayler. He did not record extensively. … END_OF_DOCUMENT_TOKEN_TO_BE_REPLACED

There’s something about cities that have distinct musical traditions within them,” says Aaron Levinson, producer of The Harlem Experiment. “It’s not an accident.” With both … END_OF_DOCUMENT_TOKEN_TO_BE_REPLACED

Marchel Ivery, a tenor saxophonist based in the Dallas area, died in his hometown on October 30th after a short illness. He was 69. Although … END_OF_DOCUMENT_TOKEN_TO_BE_REPLACED