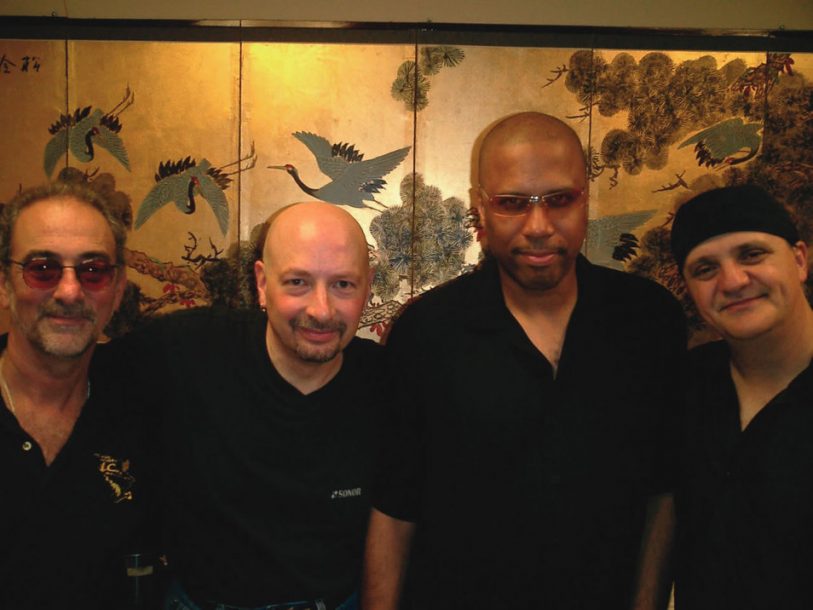 While some might argue that the golden age of jazz was long gone by the late 1960s, drummer Steve Smith disagrees. “In some ways, it was one of the best times in music history, all the way around. I’m talking about pop, jazz and jazz-rock-all of it.”

Smith discovered big-band jazz right around the time he picked up the sticks at age nine, and he saw as many bands as he could in his hometown of Boston. When he attended Berklee School of Music from 1972 to 1976, fusion groups like Mahavishnu Orchestra and Eleventh House were making waves at the same time as Led Zeppelin and Grand Funk Railroad. “When I look back on it, I really absorbed just about everything there was in the U.S. musical tradition,” he says.

Smith, of course, went on to become a household name with arena-rock band Journey, but his jazz tendencies have been kept alive for 21 years with his project Vital Information. For the group’s 11th album, Come on In, Smith, keyboardist Tom Coster, guitarist Frank Gambale and bassist Baron Browne continue Smith’s interest in diverse styles by blending a tight electric sound with New Orleans second line beats, South Indian rhythms and dizzying time-signature excursions.

“I love playing so many different styles of music, but essentially I love swinging. All my recordings have some of that in there,” Smith says. What’s remarkable is how the swing in “Around the World” evokes both New Orleans and Stevie Wonder’s “Superstition” while sticking to a 9/4 vamp. In “Baton Rouge” the group plays dueling 5/4 rhythms that can appeal to the untrained ear that doesn’t care to count along.

To emphasize the band concept, most of Come on In’s tracks were written by all (or nearly all) four members of Vital Information, an approach the group has used regularly in recent years. “That’s how we wrote all the Journey tunes, and that’s how Tom wrote most of the Santana tunes as well,” Smith says.

Vital Information, which kicks off a U.S. tour at the end of November, is only one of Smith’s current projects. He continues to lead Buddy’s Buddies (a quintet that includes Buddy Rich alumni) and perform in Soulbop (which includes Randy Brecker and Victor Bailey) and George Brooks’ Summit, which plays Indian-inspired jazz. “I feel pretty fortunate that all the groups I play with are powerhouse groups,” he says.

The least-known persons on the stage on Oct. 29 at the Kodak Theatre in Hollywood were a trio of young trumpet players: Jean Gaze from … END_OF_DOCUMENT_TOKEN_TO_BE_REPLACED

There are important jazz musicians who are more talked and read about than actually heard, and one is Albert Ayler. He did not record extensively. … END_OF_DOCUMENT_TOKEN_TO_BE_REPLACED

There’s something about cities that have distinct musical traditions within them,” says Aaron Levinson, producer of The Harlem Experiment. “It’s not an accident.” With both … END_OF_DOCUMENT_TOKEN_TO_BE_REPLACED

Marchel Ivery, a tenor saxophonist based in the Dallas area, died in his hometown on October 30th after a short illness. He was 69. Although … END_OF_DOCUMENT_TOKEN_TO_BE_REPLACED