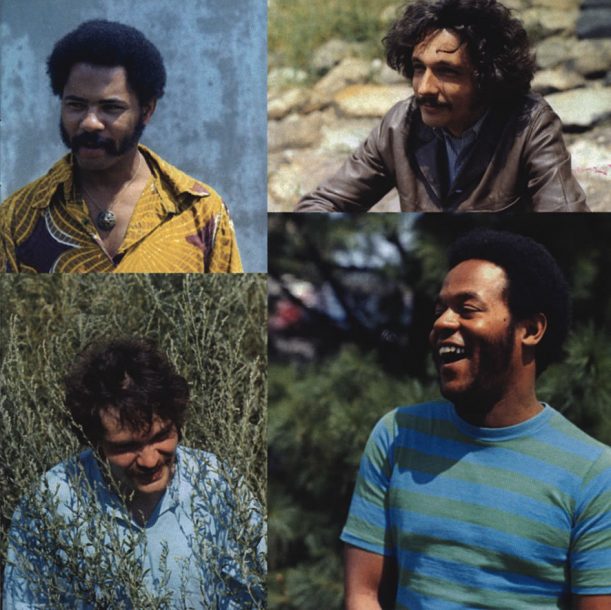 That’s the best way to describe the sound of Stark Reality’s Now (Stones Throw), an obscure collection of Hoagy Carmichael children’s songs recontextualized as wigged-out psychedelic jazz. Originally released in 1970 on Ahmad Jamal’s boutique label, AJP Records, as The Stark Reality Discovers Hoagy Carmichael’s Music Shop, the album captured the loss of innocence and the dawning of the Age of Aquarius. The album took the wide-eyed imagination of Carmichael’s lyrics and transformed them into hazy, hot-wired evocations.

“You won’t believe me, but I’ve never smoked dope with any of those guys,” says vibraphonist and bandleader Monty Stark, when asked if any recreational drugs were taken during the sessions.

“I had even stopped drinking during that time,” adds bassist Phil Morrison. “I was trying to get high off the wine of astonishment. I think we all had our thing. If someone was into drugs, then so be it. But if they weren’t into them, so be that too. Our thing was definitely nonconventional.”

Nonconventional is putting it all too mildly. The CD’s opening cut, “Junkman’s Song,” sounds like a 78 rpm record being played at 33 1/3 rpm. Morrison’s elastic bass lines along with Vinnie Johnson’s snappy drum patterns crawl underneath Stark’s dissonant vibraphone melodies and John Abercrombie’s guitar squawks-throughout he plays with the wah-wah pedal so egregiously that it sounds as if he had just bought it prior to the session. Funky, slippery notes jump from Morrison’s electric bass, while Johnson’s crisp drumming hints at what ?uestlove from the Roots might have sounded like had he been playing in a ’70s jazz-rock band.

“Junkman” sets the mood for Now, but what pushes the album over the top is Stark’s off-pitch, hillbilly singing, which makes Carmichael’s childlike lyrics about shooting stars and rocket ships sound like the sort of ruminations one ponders after hitting the bong one too many times.

And what did Carmichael think of all this? Apparently, he dug it. In fact, it was Carmichael’s son, Bix, who encouraged Stark to do the radical interpretations. The two worked at Boston’s WGBH public television station. Stark had already arranged and performed the theme song for Say Brother, one of the station’s African-American public-affairs show. Bix came up with the idea for Hoagy Carmichael’s Music Shop, an educational program that would focus on his father’s children’s songs. In order to reach the new ’70s generation, Bix employed Stark to do the show’s theme music. “We were open to anything,” recalls Morrison, who coarranged the music with Stark. “It was a challenge, and we knew that anything that we did would end up fairly creative.”

So Stark and Morrison recruited Johnson, Abercrombie and saxophonist (and short-term member) Carl Atkins to form Stark Reality. All the members of the band were astute bebop players (which comes through clearly in the music) but were very keen on the popular sounds of acid rock and funk. And with Miles Davis’ plugging in during the same time, 1970 seemed like a prime time for a band like Stark Reality. Wrong!

“We played several times at a club in Cambridge, and we were only a quartet; all night long there were more people in the band than in the audience,” laughs Johnson. “Literally, nobody came to see us. The record was played occasionally on the local stations. These were arrangements that were totally different from anything that was around at that time for children’s songs.” Needlessly to say, the band couldn’t sustain itself, and after a tour in California, the members of Stark Reality went their separate ways.

Now, 33 years later, all of the band members are delighted and surprised to see their album get reissued and be embraced by the underground hip-hop scene. “It feels like a fairy tale,” says Johnson. “What surprises me is that people dig the music; they sincerely dig it,” adds Morrison.

The album fits well into the Stones Throw label’s signature sound of rugged beats and rare grooves; and there’s no denying that Stark Reality will now be viewed as a missing link to the birth of jazz fusion. Whatever Stark Reality was or wasn’t on in 1970, they were definitely onto some other stuff.

The least-known persons on the stage on Oct. 29 at the Kodak Theatre in Hollywood were a trio of young trumpet players: Jean Gaze from … END_OF_DOCUMENT_TOKEN_TO_BE_REPLACED

There are important jazz musicians who are more talked and read about than actually heard, and one is Albert Ayler. He did not record extensively. … END_OF_DOCUMENT_TOKEN_TO_BE_REPLACED

There’s something about cities that have distinct musical traditions within them,” says Aaron Levinson, producer of The Harlem Experiment. “It’s not an accident.” With both … END_OF_DOCUMENT_TOKEN_TO_BE_REPLACED

Marchel Ivery, a tenor saxophonist based in the Dallas area, died in his hometown on October 30th after a short illness. He was 69. Although … END_OF_DOCUMENT_TOKEN_TO_BE_REPLACED