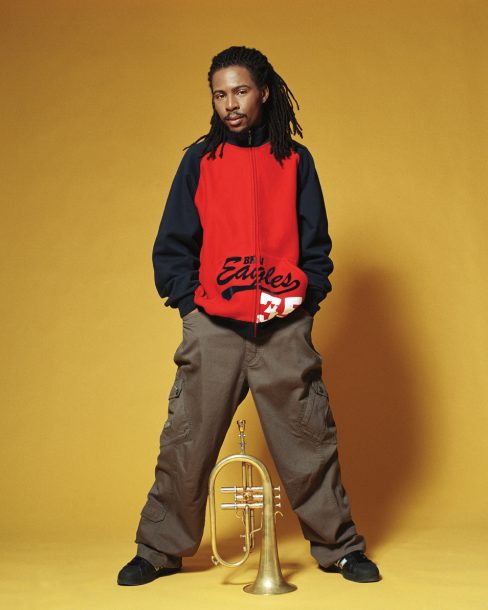 When Roy Hargrove reinvented himself into a soul man, fans of the trumpeter’s more traditional works probably hoped that his RH Factor project would be a short-term diversion. After all, the last thing mainstream instrumental jazz needs is another bright young jazz artist defecting to the dark side. “Some of my jazz peers are kind of mad at me,” laughs Hargrove. “I don’t know what it is. Some cats will congratulate me but at the same time, I get this angry vibe from them. But it doesn’t bother me.”

Well, the trumpet virtuoso hasn’t abandoned jazz, but trad fans will have to wait a little bit longer for another straightahead disc from him. Hargrove’s newest disc, Strength (Verve), is a six-song EP follow-up to last year’s Hard Groove. While recorded during the same Electric Lady Studios sessions that birthed its predecessor, Strength has a slightly different vibe.

Hargrove sees Strength as more of a “dance record. This is just another representation of the RH Factor, with an emphasis on what we’re doing live,” Hargrove says. “The record company wanted to put out something with fewer songs so that they could really concentrate on promoting it.”

The RH Factor includes saxophonists Keith Anderson and Jacques Schwarz-Bart, bassist Reggie Washington, drummers Jason Thomas and Willie Jones III and keyboardists Bobby Sparks and Renee Neufville. The band jammed so much in the studio for Hard Groove that Hargrove says he had approximately 45 songs to choose from for the CD. “It was extremely difficult, because I was really in love with at least 16 of them,” he says. “Of course, I couldn’t put everything on the CD all at once. The record company had songs that they wanted [for Hard Groove], and I had my choices. At times, there was a little bit of a struggle. But in the end, it came out OK. Then we got the opportunity to put out something else.”

Whether you love or loathe Hard Groove, it was nevertheless a monumental achievement in that Hargrove had accomplished something that has stumped many of his jazz contemporaries: he waxed a credible R&B/hip-hop album. Much of the record’s success derived from its illustrious assembly of guest artists-which made the disc feel like a genuine hip-hop album-including vocalists Erykah Badu, D’Angelo and Anthony Hamilton, rappers Common and Q-Tip, bassists Me’Shell NdegeOcello and Pino Palladino, keyboardists James Poyser, Bernard Wright and the postproduction work of engineer Russell Elevado.

Strength doesn’t have all the hip-hop/R&B star power, but it proves just how vital, imaginative and durable those original sessions were, and Hargrove hopes Verve will release even more songs from those recordings. In the meanwhile, he’s touring with his RH Factor in Europe, and is trying to coordinate a work-study effort in Bahia, Brazil. As for jazz? “Since I’ve been out with the funk band for so long, my jazz group has been sitting at home. So, I got a couple of engagements to do with them as well,” he assures.

The least-known persons on the stage on Oct. 29 at the Kodak Theatre in Hollywood were a trio of young trumpet players: Jean Gaze from … END_OF_DOCUMENT_TOKEN_TO_BE_REPLACED

There are important jazz musicians who are more talked and read about than actually heard, and one is Albert Ayler. He did not record extensively. … END_OF_DOCUMENT_TOKEN_TO_BE_REPLACED

There’s something about cities that have distinct musical traditions within them,” says Aaron Levinson, producer of The Harlem Experiment. “It’s not an accident.” With both … END_OF_DOCUMENT_TOKEN_TO_BE_REPLACED

Marchel Ivery, a tenor saxophonist based in the Dallas area, died in his hometown on October 30th after a short illness. He was 69. Although … END_OF_DOCUMENT_TOKEN_TO_BE_REPLACED