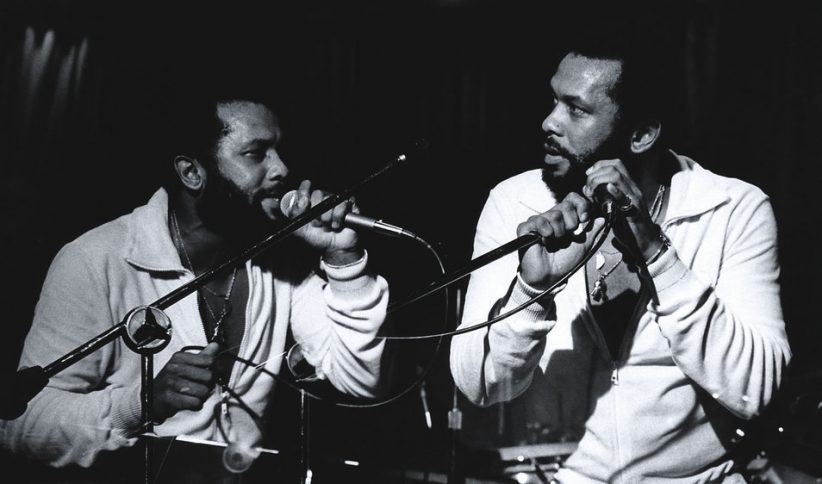 Call him a jazz sellout if you want, but Roy Ayers is one of the most resilient vibraphonists of our time. In the course of four decades, he’s aptly reinvented himself accordingly to popular tastes. In the late-’60s, he was a hard-bopper, playing with the likes of Herbie Hancock, Ron Carter and Joe Henderson, but when the ’70s began, Ayers morphed into an Afrocentric, politically minded R&B-funk prince, releasing classic albums such as Red, Black & Green and He’s Coming (both on Polydor).

During that time, he also scored the 1973 film Coffy, one of the most treasured blaxploitaton soundtracks. And once disco advanced to the vanguard, he found himself writing and performing dance-floor fillers such as “Freaky Deaky” and “Get on Up, Get on Down.” From there, he went on to Nigeria’s Afro-beat, linking up with Fela Kuti in the early ’80s for Africa, Center of the World (Polydor), 2000 Black (Celluloid) and Music of Many Colours (Blygram). Lately, you’re likely to find Ayers performing on a number of deep-house and broken-beat singles for the electronica market, not to mention the immeasurable amount of samples he’s supplied to top hip-hop and R&B artists.

“A lot of people would say, ‘Roy, we’ve heard you for years playing straightahead, have you sold out?'” Ayers says of the early backlash from jazz purists. “I would ask them, ‘Are you doing commercials on the station?’ And, they would say, ‘Yes.’ Then, I would say, ‘Did you sell out? Why aren’t you playing complete music and no commercials?’ The reason I’m saying this is that bills have to be paid.

“I’m versatile-that is a plus for me,” he continues. “Some other jazz artists don’t do other genres, and I don’t knock them for that. I respect their choices. But I have versatility going, and when you are as versatile as I am you do what Roy Ayers has done. I knew exactly what I was doing. I had a purpose and objective. In 1970, when I left Herbie Mann to form Ubiquity, I realized the necessity to incorporate singers, because I wanted to reach wider recognition. I wanted to chart on the R&B, jazz and pop charts.”

And while his name isn’t mentioned much in today’s jazz circles, Ayers’ reputation as an intoxicatingly rhythmic vibraphonist and songwriter commands tremendous respect in the hip-hop, house, neosoul and broken-beat communities. “Erykah Badu was telling me the other day that I was the neosoul king,” he says. “I’ve never heard that before. She said that people like the Roots, Jill Scott and D’Angelo are all subjects of my school.”

Indeed, Ayers’ signature sound of infectious syncopated rhythms and soulful singing, topped off with a creamy, sensual veneer has served as an indelible boilerplate for neosoul, particularly his fertile period on Polydor Records, between 1976 and 1981. “That’s my hottest period in my life. I sold more records then than ever,” he recalls.

Apparently, the British-based indie label BBE/Rapster thinks that period is still hot as evidenced by the two-disc compilation Virgin Ubiquity: Unreleased Recordings 1976-1981. Ayers says that he has almost 150 24-track tapes from that period. The CD is a hodgepodge of ass-spanking funk, slinky disco and lubricating quiet-storm ballads. The idea for the project came about in 2001, when Ayers and longtime musical partner Edwin Birdsong got together with BBE’s label boss, Peter Adarkwah, to re-record Cannonball Adderley’s “Hummin.'” Adarkwah later learned that Ayers had a lot of unreleased material, and when he heard the music, he went bananas. “Peter he started dancing around like Jason Kay [lead singer of Jamiroquai],” Ayers laughs. “He said, ‘You got the baddest grooves.'”

Luckily, Ayers had been business-savvy enough to ink a deal with Polydor that allowed him to keep his masters-a rarity for many artists, especially in the jazz and R&B realms. “I was signed to my production company, Ro-Ayer Production. And my production company would keep everything that I didn’t give to them,” he explains. “I’m just glad that I was able to own my own stuff, because a lot of artists don’t have that opportunity to fall back on some of their own masters or even have control over them.”

With all the emphasis on R&B and funk, Ayers still has mad love for jazz, citing Stefon Harris and Steve Nelson as two contemporary vibraphonists that he particularly enjoys. Lionel Hampton comes up in conversation when Ayers talks about his early years growing up in Los Angeles. “My parents used to play his music in house when I was a kid. They took me to see him when I was five years old. He gave me a set of vibe mallets. My parents said he laid some spiritual vibes on me.”

Ayers also speaks fondly of Bobby Hutcherson, who grew up nearby in Pasadena. The two would often gig together in Southern California.

When asked if he’ll ever return to straightahead jazz, Ayers says that we can expect something in that vein in about two years. But for now, he’s keeping his funk-motor running. “I’m 63, but I feel like I’m 23,” he laughs. “I’m still in good shape and spirits.”

The least-known persons on the stage on Oct. 29 at the Kodak Theatre in Hollywood were a trio of young trumpet players: Jean Gaze from … END_OF_DOCUMENT_TOKEN_TO_BE_REPLACED

There are important jazz musicians who are more talked and read about than actually heard, and one is Albert Ayler. He did not record extensively. … END_OF_DOCUMENT_TOKEN_TO_BE_REPLACED

There’s something about cities that have distinct musical traditions within them,” says Aaron Levinson, producer of The Harlem Experiment. “It’s not an accident.” With both … END_OF_DOCUMENT_TOKEN_TO_BE_REPLACED

Marchel Ivery, a tenor saxophonist based in the Dallas area, died in his hometown on October 30th after a short illness. He was 69. Although … END_OF_DOCUMENT_TOKEN_TO_BE_REPLACED