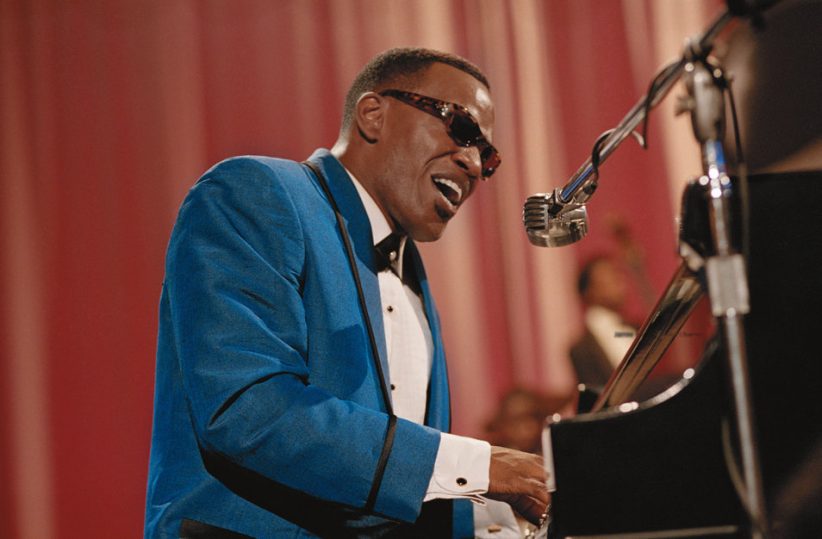 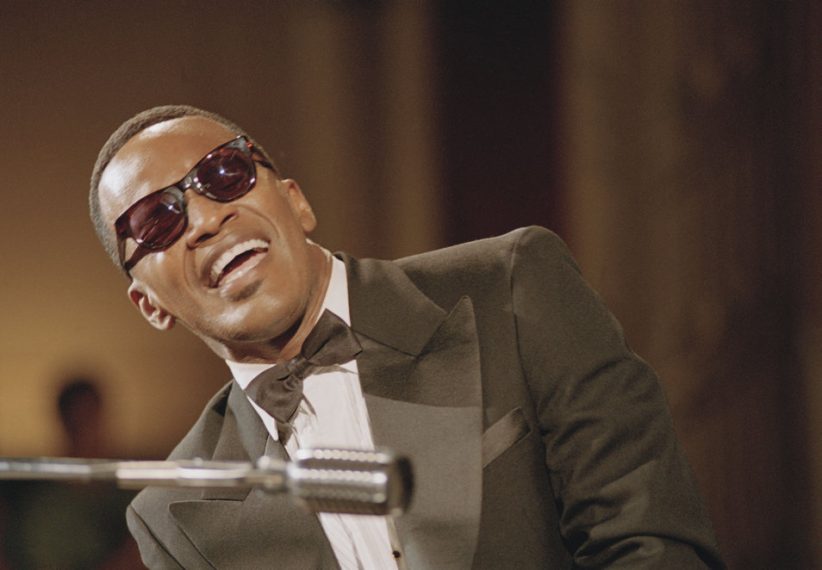 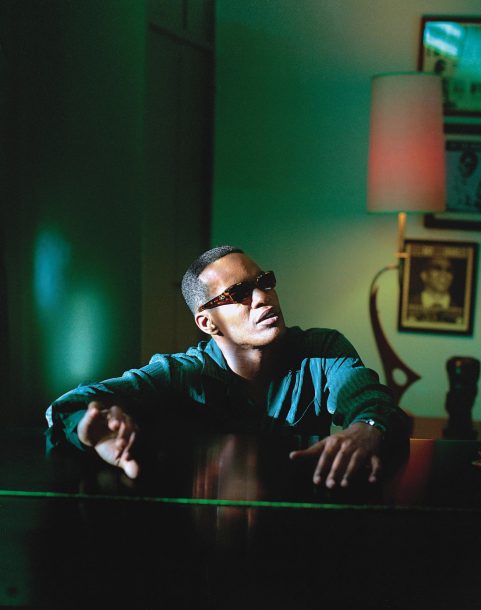 Nine words you’re likely to hear this coming February 27: “And the Oscar goes to Jamie Foxx for Ray.” So utterly and superbly does the standup comic turned dramatic actor-and trained pianist, whose earliest ambition was to become a professional musician-capture the heart and soul of Ray Charles that it’s impossible to imagine any performance outdistancing Foxx’s in the race for Oscar gold. Directed by Taylor Hackford (Everybody’s All-American, When We Were Kings), Ray traces Charles’ triumphant career and turbulent personal life, replete with debilitating drug abuse and a steady stream of extramarital affairs, from the childhood bout with glaucoma that blinded him at age seven to his ultimate achievement of international superstardom. Prior to the film’s October release, I caught up with Foxx at the Toronto International Film Festival, where he and Ray were greeted with unilateral praise.

JazzTimes: Everybody knows you as a great comedian and, thanks to Collateral and now Ray, also as a terrific dramatic actor, but your earliest ambition was to be a musician and, I understand, your musical training turned out to be hugely beneficial.

Taylor didn’t know that I play piano, so he said, “I gotta figure out a way to shoot your face and then shoot somebody else’s hands playing.” And I said, “No, no, I actually play. I’ve been playing since I was five.” That opened up a whole different thing. Since I can play, we could stay in the same frame and shoot through the playing of the music and the singing at the same time, which was a huge plus.

JazzTimes: Prior to filming you got to meet with Ray. What was that like?

Incredible! I mean you’re waiting like you’re in the doctor’s office, like “Oh my god, I’m gonna talk to him! What do I do, what do I say?!” He walks in, smiles, hugs me, shakes my hand and says, “Oh, you got strong hands. I love these strong hands. Let’s get on the piano!” We were at his studio and there were pianos everywhere. He got on one piano and I got on another and we’re playing the blues and he says, “If you can play the blues, you can do anything.” So we start singing back and forth and, boom! He goes into Thelonious Monk. I didn’t know what to do, so I quit playing. He says, “Go ahead and play that!” I tried and hit the wrong note and he says, “Why the hell would you do that?!” I said, “I don’t know,” and he says, “Well, the notes are right underneath your fingers. You just need to take time out to find the notes.” I took that as a metaphor. Ray was telling me that life is notes underneath your fingers. You just need to take time to figure out what notes you need to play.

You have to have patience! There would be times when everybody would be, like, “Foxx! You gotta go to sleep.” And I’d say, ‘I can’t go to sleep, even though I’ve got to be on set at eight in the morning, because I have to have all of these 96 music cues learned.” It was too important to the piece. If I didn’t have them down, the piece was gonna fail. The music had to be legit. It was like I wasn’t rehearsing to go play in a movie; I was rehearsing because we’ve got a gig tomorrow!

JazzTimes: Did you make the decision to lip sync Ray’s singing instead of doing it yourself?

No, Taylor did. Taylor thought it would be just terrible not to have Ray’s voice. I was, like, “I want to sing!” But when you hear [Ray’s] voice it goes right through you, so I think it was the right choice.

JazzTimes: What do you think of Ray’s final album, Genius Loves Company?

It’s crazy. It’s incredible. It’s insane. To see a person of his age, in the middle of the hip-hop world and the rock ‘n’ roll world and everything that’s going on, step up and give you such a beautiful album is amazing. His music will never, never die.

Ray was great about that. He said, “Look, man, tell the story. If you don’t tell the story, it’s not going to be interesting.” Nobody wants to see a movie that’s, like, “Ooh, Ray, you were so good all your life because you were blind.” You want to see the serious decisions he had to make in order to keep his life going. He had a career that lasted over 50 years. There were certain things he had to do. But he was still a man, and was fractured in some sense with the drugs and the women. Back then, heroin was the drug of choice. Look at how jazz musicians were playing at the time, experimenting and allowing their minds to expand.

JazzTimes: I know you’re a jazz fan; who are your influences?

I got a chance to hang out with Herbie Hancock [and] I know the stories of Chick Corea and Miles Davis. Those guys were huge influences because they were young and just so eager to do things. You still see Chick around. I still live through his music. I run into Herbie Hancock a lot at the Playboy Jazz Festival. He, along with Wynton Marsalis, is one of the greatest. I’ve been going to the Playboy Jazz fest for about the past eight years, and last year I took Taylor. It was a beautiful experience. And I told him that when I first started going to the jazz festival I used to sit way up in the stands where all the extracurricular activities were going on and we didn’t even really know who was on stage because we were so far away. I used to tell my friend, “One day we’ll be down there, man!” And he said, “Aw, you ain’t gonna never be down there.” Then the next thing you know I’m sitting right next to Hugh Hefner in his box and I’m watching Herbie Hancock play.

Wynton Marsalis played this year at the Playboy Jazz Festival, and they did a special tribute to Ray Charles. He played “The Old Rugged Cross.” He said “I’m gonna do it New Orleans style,” and we all picked up our little white handkerchiefs, you know, celebrating Ray Charles’ life and death. And then he goes into “When the Saints Go Marching In.” People were blown away. There wasn’t a dry eye in the whole place. Miles Davis, Herbie Hancock, Wynton Marsalis are true pioneers, and so was Ray Charles. He’s one of the elite. He said, “I’m gonna go out, and I’m gonna break down these barriers. I’m gonna keep playing this music and they’re gonna keep lovin’ it.”

The least-known persons on the stage on Oct. 29 at the Kodak Theatre in Hollywood were a trio of young trumpet players: Jean Gaze from … END_OF_DOCUMENT_TOKEN_TO_BE_REPLACED

There are important jazz musicians who are more talked and read about than actually heard, and one is Albert Ayler. He did not record extensively. … END_OF_DOCUMENT_TOKEN_TO_BE_REPLACED

There’s something about cities that have distinct musical traditions within them,” says Aaron Levinson, producer of The Harlem Experiment. “It’s not an accident.” With both … END_OF_DOCUMENT_TOKEN_TO_BE_REPLACED

Marchel Ivery, a tenor saxophonist based in the Dallas area, died in his hometown on October 30th after a short illness. He was 69. Although … END_OF_DOCUMENT_TOKEN_TO_BE_REPLACED