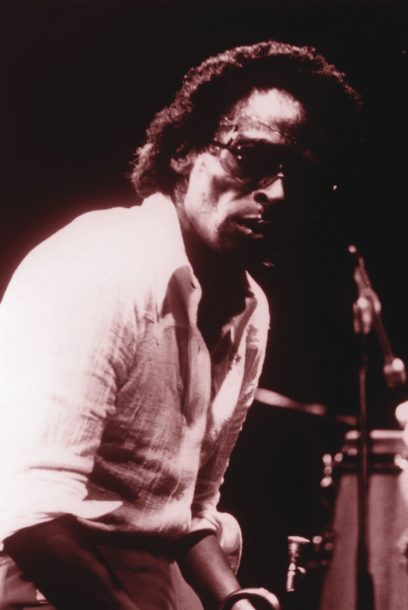 On March 13 the Rock and Roll Hall of Fame added another five musical acts to its growing list of honorees: heavy metal progenitors Black Sabbath, new wavers Blondie, Southern rockers Lynyrd Skynyrd, British punks the Sex Pistols and legendary rock ‘n’ roller Miles Davis. Before the Rock and Roll Hall of Fame had even booked the room at the Waldorf-Astoria where the induction ceremony was held, folks were abuzz at the idea: Miles Davis enshrined as a rocker? What does that say about jazz? What does that say about rock? Really, no one has anything to worry or complain about. The Rock and Roll Hall of Fame has little to do with rock ‘n’ roll music. Just take a look at the list of inductees the Hall’s been adding since 1986.

Stevie Wonder can out sing damn near anybody any day, and he has more soul than most church choirs I’ve heard, but I’ve never once heard Wonder play rock ‘n’ roll. Yet in 1989 Wonder got into the Rock and Roll Hall of Fame, along with the Temptations and Otis Redding. (Dion and the Rolling Stones, that year’s other two inductees, and bona fide rock artists, were outnumbered by soul singers three to two!) Bob Marley influenced rockers from Eric Clapton to the Police, but Marley and the Wailers played reggae, period. And Marley passed for entrance into the Rock and Roll Hall of Fame in 1994. Johnny Cash? 1992. Earth, Wind & Fire? 2000.

Obviously, playing rock ‘n’ roll is not a prerequisite for induction into the Rock and Roll Hall of Fame. Performers from genres outside rock can be considered for the honor as long as they have lived up to some part of the “rock ‘n’ roll lifestyle,” a concept that can include any or all of the following: an unthinkable level of fame, abusive drinking and drug consumption, widely influential musical output, uncompromising attitude and flamboyant dress.

So, by that standard: Miles Davis a rock star? Absolutely.

By the late ’60s Miles was tapping rock’s raw energy and applying it to his own music. He, like everyone else at the time, was enchanted by Jimi Hendrix-so much so that he not only robbed a riff or two from the genius guitarist but, according to his memoir, began shopping for clothes at one of Hendrix’s haberdasheries in order to get that same tripped-out look, that youthful rock ‘n’ roll image. He even used the same hairdresser as Hendrix. Make no mistake, Miles did all of this to uphold his star image, to keep that gravy train of fame rolling along. That was important to him, which isn’t to say that the music didn’t matter anymore.

Music was always paramount to Miles, and his electric period was just one of his many visionary phases. He had rock ‘n’ roll attitude before he ever plugged in and played jazz-rock. Miles rocked jazz throughout his brilliant career: birthing the cool, going modal on bop and, yep, eventually brewing up a bitch-fest with jazz purists by creating fusion in the late ’60s. That he did so is all the justification needed for his Rock and Roll Hall of Fame induction. He was at least as revolutionary and attitudinal as any Sex Pistol, which brings me to this: Would Miles have dug being honored by the Rock and Roll Hall of Fame in this way?

Fellow inductees the Sex Pistols predictably played the too-cool-for-school card, blowing off the induction ceremony and publicly calling the Rock and Roll Hall of Fame a “piss stain” and likening the Hall’s museum in Cleveland to “urine in wine.” That’s an opinion that, if we swap some vulgarities, I could see Miles sharing about an institution as self-celebratory as the Rock and Roll Hall of Fame.

But think about it for minute. Miles Davis, among the rock ‘n’ roll elite, being inducted by, say, his old friend Herbie Hancock, to a list that will one day include every notable pop star that ever lived. He would have eaten it up.

The least-known persons on the stage on Oct. 29 at the Kodak Theatre in Hollywood were a trio of young trumpet players: Jean Gaze from … END_OF_DOCUMENT_TOKEN_TO_BE_REPLACED

There are important jazz musicians who are more talked and read about than actually heard, and one is Albert Ayler. He did not record extensively. … END_OF_DOCUMENT_TOKEN_TO_BE_REPLACED

There’s something about cities that have distinct musical traditions within them,” says Aaron Levinson, producer of The Harlem Experiment. “It’s not an accident.” With both … END_OF_DOCUMENT_TOKEN_TO_BE_REPLACED

Marchel Ivery, a tenor saxophonist based in the Dallas area, died in his hometown on October 30th after a short illness. He was 69. Although … END_OF_DOCUMENT_TOKEN_TO_BE_REPLACED