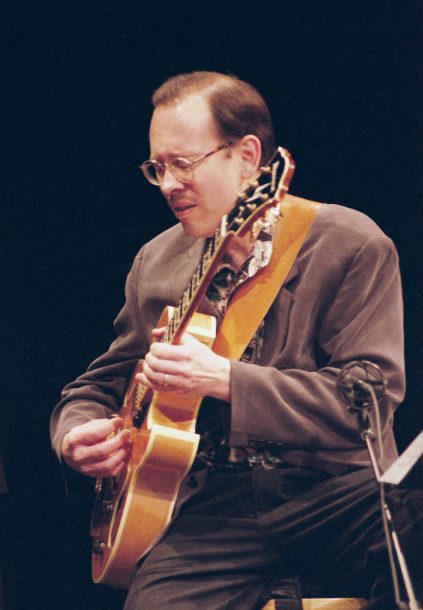 Marty Ashby speaks in a calm, articulate voice that hints at a background that includes work with Pittsburgh Symphony and Cleveland Orchestras. But the executive producer of MCG Jazz, the Manchester Craftsmen’s Guild jazz series, proves he ain’t no stiff when he points to a full-page Nancy Wilson article from a recent Ebony in which the singer talks about working at the Guild with Pittsburgh musicians like Joe Negri. “You dig? Dig that, man, that’s huge!” he exclaims, voice rising. “That kind of opportunity is made available through this little school on the North Side of Pittsburgh in an industrial park. We’re creating world-class music.”

Wilson’s new album, R.S.V.P. (Rare Songs, Very Personal), is only one of several recent accomplishments that Pittsburgh’s Manchester Craftsmen’s Guild can add to a list that includes a recording and DVD editing studio that has given birth to 20 CD releases, including two Grammy winners, and a concert series that began its 18th season in September. Wal-Mart, the nation’s largest retailer and the seller of 20 percent of all music recordings in the U.S., agreed earlier this year to distribute three specially designed MCG compilation discs and the Wilson album. The label reunited longtime friends Phil Woods and Herbie Mann in the studio for Beyond Brooklyn, which includes a recording made weeks before Mann passed away. What began as an arts program and vocational training center has gone on to become an arts institution committed to preserving jazz’s legacy-and its organizers see MCG as one step toward bringing the music back to a larger audience around the world.

Bill Strickland created the Manchester Craftsmen’s Guild in 1968 in a row house six blocks from his organization’s current home, a 20-year-old Frank Lloyd Wright-designed building that features a 350-seat auditorium. Strickland launched MCG as a general arts program to help public school children who might have self-esteem or academic issues. The idea came from a teacher of Strickland’s who inspired him to work with clay sculptures and, later, helped him get into college. Today the organization has come to include the nearby Bidwell Training Center-necessitating the proper name Manchester Bidwell Corporation-and still offers sculpture as well as photography, digital imaging and horticultural training and an art exhibition program.

As a guitarist Marty Ashby was working for the Pittsburgh Symphony Orchestra in 1986 when he first heard about the Craftsmen’s Guild. The late guitarist Emily Remler was asked to play there and, not knowing anything about this new venue that sat across the way from a failed shopping mall, she asked Ashby to check it out with her. “We walked in and Bill Strickland gave the same tour he gives today,” Ashby remembers. “He says he built the music hall to do jazz concerts because he loves jazz. And I said, ‘We need to talk, sir.'”

Ashby stayed up all night writing Strickland a proposal explaining how he would to take a 60-percent pay cut from his current job if he was hired to program the music. Surprised by the offer, Strickland asked for references. Ashby gave him phone numbers for Ahmad Jamal and Dr. Billy Taylor. Both spoke fondly of the guitarist, and he’s held the job ever since.

Throughout the years, the Guild has played host to a list of artists that include Dizzy Gillespie, Max Roach, Slide Hampton, Dave Holland and Pat Metheny. Each artist performs five concerts over four days, with tickets sold in a subscription series that is arguably the oldest such series for jazz concerts in the country. “Our whole concept is to celebrate this music and musicians in a meaningful way, which is why we present the music in a subscription format series in a concert hall,” Ashby says. “My mantra is that jazz music should be presented the way the other OPAs are-the ‘other performing arts’: opera, theater, ballet, symphony orchestras.”

In 1995, the Guild released its first CD, Count Basie Orchestra With the New York Voices: Live at Manchester Craftsmen’s Guild. When the disc won a Grammy, Ashby says the institution wasn’t prepared to capitalize on the success. Likewise, when Nancy Wilson released her Christmas CD three years ago and promoted it on Oprah, the MCG Web site didn’t yet have e-commerce capability.

But the organization has developed the ability to learn and they proceed. It’s been able to manage this through a balance of various funding sources. Strickland says 30 percent of the budget comes from grants, with corporate sponsorship helping both the arts and vocational programs. Funds also come from the National Endowment for the Arts and the Pennsylvania Council for the Arts. The Guild has only recently begun to build a development department, which Strickland says will help secure more contributions. “There’s a lot of people who love this place, but we’ve never asked them for some money because we’ve never been deep enough organizationally to do that,” he says.

When Strickland spoke at the International Grocers Convention a few years ago, a senior member of Wal-Mart’s management approached him, impressed with the story of the Guild. A few months later, members of the company toured the site. The visit came hot on the heels of a Grammy for a MCG CD by Paquito D’Rivera and the New York Voices, and Ashby prepared a promo kit of the label’s releases. Talks continued, and MCG created three discs from its archives to be sold at Wal-Mart; the separate volumes feature Brazilian jazz, swing and what Ashby calls quintessential jazz, “everything from Nancy Wilson to Spyro Gyra.”

Ashby says the corporate monolith’s decision to stock the CD was pure business, not altruism, and he had no problem with that. “What I’ve learned over the last 40 years is that success in the music business is at the intersection of art and commerce. And here at Manchester, we’re really honing in on that intersection,” he says. “So you don’t sacrifice the art, yet you have an eye on the commerce side.”

Having begun to crack that code through lessons learned and various alliances, the Manchester Craftsmen’s Guild is becoming a template for institutions such as the International Association for Jazz Education. Ashby, who serves on IAJE’s capital campaign commitee, looks beyond the personal benefit, seeing this as a boon for the jazz music as a whole. “I think that the jazz industry is right on the cusp of banding together in a meaningful way so that we can actually increase the market share of jazz,” he says. “We haven’t been able to make the case to the major multinational corporations that support us, like they do with golf and NASCAR and country music tours.

“But I also believe the stars are aligning,” Ashby says. “In the next few years, we’re going to see some significant change. And the fact that we survived this conversation in Pittsburgh for [this long] is a prime example that it’s possible.”

The least-known persons on the stage on Oct. 29 at the Kodak Theatre in Hollywood were a trio of young trumpet players: Jean Gaze from … END_OF_DOCUMENT_TOKEN_TO_BE_REPLACED

There are important jazz musicians who are more talked and read about than actually heard, and one is Albert Ayler. He did not record extensively. … END_OF_DOCUMENT_TOKEN_TO_BE_REPLACED

There’s something about cities that have distinct musical traditions within them,” says Aaron Levinson, producer of The Harlem Experiment. “It’s not an accident.” With both … END_OF_DOCUMENT_TOKEN_TO_BE_REPLACED

Marchel Ivery, a tenor saxophonist based in the Dallas area, died in his hometown on October 30th after a short illness. He was 69. Although … END_OF_DOCUMENT_TOKEN_TO_BE_REPLACED