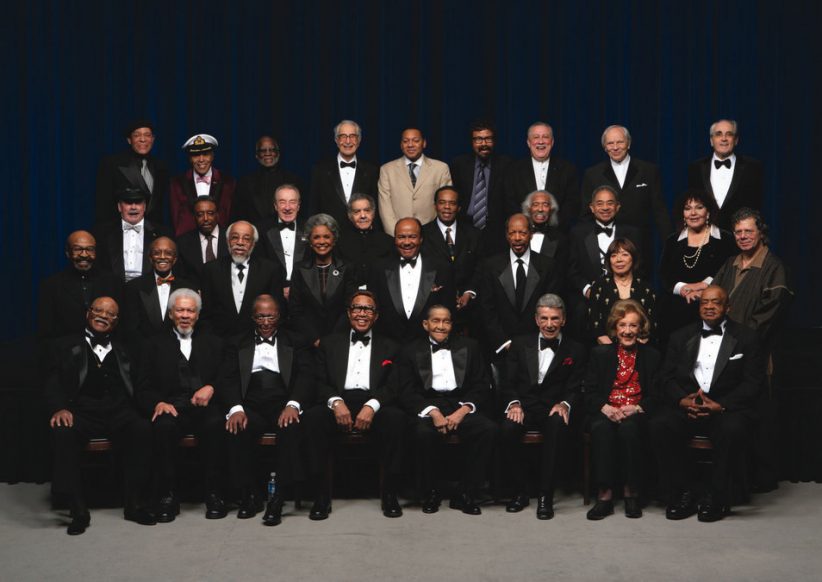 What we’re trying to do as a whole with the Kennedy Center jazz program is to fight the idea that jazz is dead,” Dr. Billy Taylor informed a pre-concert crowd at the Living Jazz Legends gala, held March 5 at Washington D.C.’s Kennedy Center. “People keep coming up with that, saying, ‘Man, we’ve got all these old guys playing jazz and jazz is dead, everybody that’s playing jazz is either dead or dying.’ What these kids are playing now, and the kind of camaraderie we have…it’s very exciting.”

The concert, along with the “Jazz in Our Time” festivities it kicked off, was a fitting celebration of what has been an impressive 13 years of jazz programming at this American cultural institution. It was 1994 when Dr. Taylor, apropos of his status as a DC-bred jazz master and a distinguished jazz spokesperson, was appointed the Center’s artistic advisor for jazz. This gala evening was planned by Taylor, Kennedy Center president Michael Kaiser and KC manager of jazz programming Kevin Struthers.

“For years Billy and I discussed that too often, pioneer jazz musicians of his generation are recognized publicly only after they’re gone,” Struthers remarked recently. “Michael had been thinking about how the Center might appropriately acknowledge artists of different genres that fit with the Kennedy Center’s role as the national cultural center … Each of the seven nights following [the opening-night gala concert, we had] several of the Legends performing as well: Ahmad Jamal with Jimmy Heath and Frank Wess; Paquito D’Rivera and Clark Terry; Benny Golson and Curtis Fuller…”

The pre-concert reception was a joyous celebration in the Kennedy Center Jazz Club space. Peering around the room, there was Jimmy Heath looming over a table with Al Jarreau; or Freddie Hubbard, Ahmad Jamal, Paquito D’Rivera and Donald Byrd regaling them with tales of Dizzy, while at the next table, George Russell and cohort David Baker caught up; across the room West Coasters Gerald Wilson and Chico Hamilton waxed rhapsodic and next door Billy Taylor and Louie Bellson reminisced on Duke; at the front of the room Jon Hendricks and Clark Terry were hooting it up, while Ornette sat quietly in a corner chatting. As Hamilton remarked, “Most of the guys in this room came up with the people who actually invented this music!”

The concert kicked off with the ebullient Clayton Brothers quintet, trumpeter Terell Stafford shooting fireworks and Jeff Clayton blissfully channeling Cannonball Adderley’s spirit in his own fashion. They were succeeded onstage by the evening’s all-star quintet: Regina Carter, Cyrus Chestnut, Jon Faddis, T.S. Monk and John Clayton. Dr. Taylor and Jon Hendricks teamed up for “Easy Walker,” followed by a Jazztet reunion where Benny Golson and Curtis Fuller invoking Ellington with “A Train.” One of the evening’s heartiest ovations was elicited by Brubeck and Wynton Marsalis rendering a puckish “These Foolish Things.”

It was fitting that the erudite catalyst Dr. Taylor then joined his 34 peer Legends for a grand fete in the glittery Concert Hall. Ranging alphabetically from Toshiko Akiyoshi to Phil Woods, stylistically from Gerald Wilson and Dave Brubeck to Ornette Coleman and George Russell, much of jazz music’s royalty spanned the stage in a grand processional after the concert’s intermission, each festooned with scarlet-ribboned gold medals, a la the Kennedy Center Honors. Having the Legends receive their medals onstage would have enhanced the thrill.

The second half of the well-paced evening belonged to the Clayton-Hamilton Jazz Orchestra, first conducted by honoree Michel Legrand. John Clayton then assumed his regular role to conduct “Old Folks” and “Day In, Day Out” for some joyous Nancy Wilson vocal business. Frank Wess, James Moody, Jimmy Heath and Phil Woods offered bop of the highest order with the CHJO, and the evening closed with a heartfelt rendition of Billy Taylor’s enduring anthem “I Wish I Knew How It Would Feel to Be Free,” with the CHJO, the Morgan State University Choir, Nancy Wilson, Jon Faddis and Regina Carter. The proceedings were emceed by the usually stentorian but on this night oddly irresolute James Earl Jones-a minor glitch in an otherwise stellar evening.

The least-known persons on the stage on Oct. 29 at the Kodak Theatre in Hollywood were a trio of young trumpet players: Jean Gaze from … END_OF_DOCUMENT_TOKEN_TO_BE_REPLACED

There are important jazz musicians who are more talked and read about than actually heard, and one is Albert Ayler. He did not record extensively. … END_OF_DOCUMENT_TOKEN_TO_BE_REPLACED

There’s something about cities that have distinct musical traditions within them,” says Aaron Levinson, producer of The Harlem Experiment. “It’s not an accident.” With both … END_OF_DOCUMENT_TOKEN_TO_BE_REPLACED