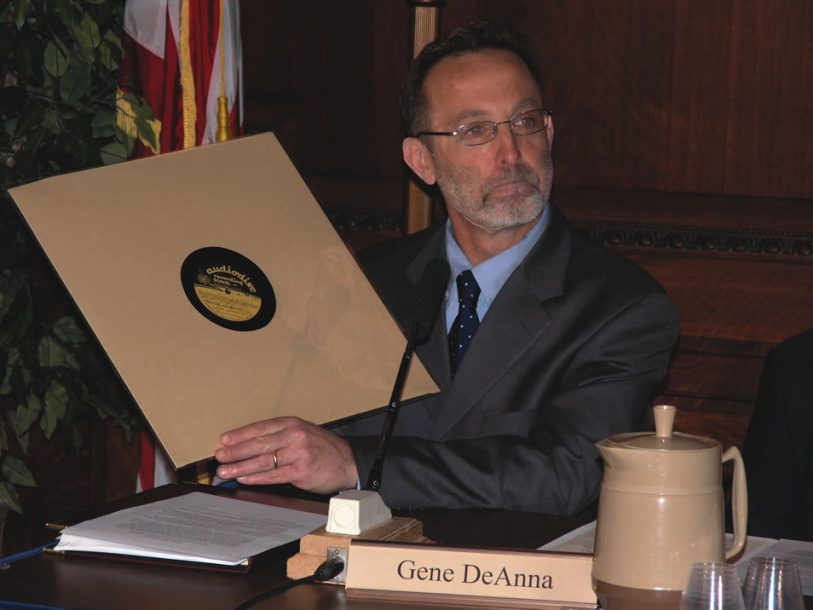 Eugene DeAnna, head of the Recorded Sound Section at the Library of Congress, displays the 16-inch lacquer disc labeled "Jam Session, December 29, 1940," which is a never-released original recording of saxophonist Lester Young and a band improvising in an

The records themselves look unimpressive: A set of old black 16-inch lacquered discs with yellowed labels and dusty faces aged from years in storage. The sound on the discs, on the other hand, is unmistakable: A rich tenor saxophone lightly fluttering above a blitz of horns, piano and drums. There’s no doubt about it: It’s gotta be Pres.

The Library of Congress recently announced that it has unearthed an extremely rare live recording of legendary saxophonist Lester Young from 1940. The recording provides a glimpse into Young’s playing at a pivotal (and little documented) point in his musical development, between his late 1930s work with Count Basie and his years in the army.

However, nearly as impressive as the playing is the story behind the recording’s discovery, which seems like something out of a Hollywood screenplay.

In 2001, a Library of Congress team was digitizing a 1940 Zora Neale Hurston silent film that documented rural African-American life in South Carolina. While working on the project, the team received a letter from a California man who claimed to possess audio recordings to match the film. He said Hurston’s team hired him to record the film’s sound. In 2002, the man, Norman Chalfin, donated his entire collection of 150 recordings to the Library of Congress and catalogers began the immense task of sifting through the discs to find the Hurston sound recordings.

Then the team made the discovery of a lifetime.

Among Chalfin’s recordings was a sloppily labeled disc set. “It had some Beethoven sonata crossed out,” says Eugene DeAnna, head of the recorded sound section at the Library of Congress. “Written over top of that, it said ‘Jam Session, Dec. 29, 1940’ with the first initial and last name of five different people.”

One of those people was “L. Young.”

“We all looked at the label and thought, ‘Could it be Lester?'” DeAnna recalls.

“I was stunned to hear what sounded like Lester Young [on the recording],” said Library of Congress recording lab supervisor and jazz specialist Larry Appelbaum.

Appelbaum called in jazz scholar Loren Schoenberg, who verified that it was indeed Young on the recording, playing “Royal Garden Blues” and a number of unidentified blues.

After some research, DeAnna learned that Chalfin was an aspiring audio engineer during the 1940s while he attended college in New York City. He was in fact hired by Hurston’s team to make the South Carolina recordings and, in his spare time, he documented live music at clubs in the city.

It’s not entirely clear where the 35-minute Young recording took place, though some have said it’s most likely the Village Vanguard.

Young is joined on the recording by trumpeter Shad Collins, drummer Harold “Doc” West, trombonist J.C. Higginbotham and Sammy Price on piano, all musicians who regularly accompanied him in the early 1940s.

“On the commercial recordings Lester made in the ’30s with Basie and others, his solos are generally short-because those 78 rpm discs only ran two-and-a-half to three minutes,” Appelbaum says. “On these discs, he stretches out more and it’s very much about feeling rather than virtuosity.”

This discovery is important not only in the jazz community but within the canon of recorded music.

“Imagine a new Shakespearean sonnet, Chopin nocturne or Hemingway short story-that’s what we have here-an American master, a true iconoclast at his very best,” Schoenberg writes in a press release.

It is not known if Chalfin’s collection contains any other recordings of Young, who died in 1959.

As for Chalfin himself, he has since passed away, though he quit being a recording engineer in the 1940s to pursue law. For jazz fans, that’s looking like an unfortunate career move indeed.

The least-known persons on the stage on Oct. 29 at the Kodak Theatre in Hollywood were a trio of young trumpet players: Jean Gaze from … END_OF_DOCUMENT_TOKEN_TO_BE_REPLACED

There are important jazz musicians who are more talked and read about than actually heard, and one is Albert Ayler. He did not record extensively. … END_OF_DOCUMENT_TOKEN_TO_BE_REPLACED

Marchel Ivery, a tenor saxophonist based in the Dallas area, died in his hometown on October 30th after a short illness. He was 69. Although … END_OF_DOCUMENT_TOKEN_TO_BE_REPLACED