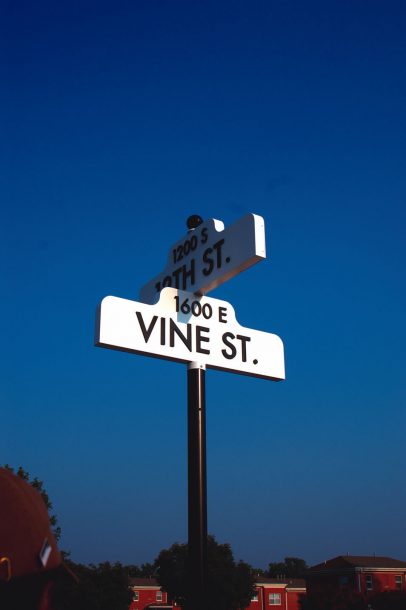 The intersection of 18th and Vine in Kansas City, MO

On September 11th, 2005, Kansas City, Mo., officially claimed its legacy as the incubator of America’s only indigenous music form, jazz. In a ceremony attended by Mayor Kay Barnes and other state legislators and civic and business leaders, the city once known as the “Paris of the Plains” for its hepcat jazz scene dedicated its Goin’ to Kansas City Plaza, a piano-shaped expanse of parkland. This new plaza east of the Paseo Bridge was marked by a new signage commemorating 12th and Vine Streets, the intersection immortalized in Leiber and Stoller’s rollicking hit “Goin’ to Kansas City.”

Obliterated by 1970s redevelopment that left the once-famous corner (and hub of the black community) in the middle of a field for years, the intersection is now the centerpiece of the new city park. The plaza also features a monument describing how the song “Kansas City” was written and performed, and a meandering pathway paved in red that forms a giant G clef that can be seen from the air. The park will eventually become a sculpture garden for works embodying the jazz spirit of Kansas City.

Mike Stoller himself was on hand at the dedication ceremony, and the Kansas City Little Jazz Band featuring saxophonist Bobby Bryant Jr. led a celebratory version of the song, which the city adopted as its official anthem on August 25th. “Fifty years ago my partner Jerry Leiber and I wrote a song; we called it ‘Kansas City,'” Stoller told the crowd. “It was based on our imagination about this wonderful, wonderful city and the great jazz that came out of it, the great blues that came out it: Charlie Parker, Jay McShann, Big Joe Turner, Count Basie with Lester Young and the Kansas City Seven. All of that was a fantasy for us. We were 19 years old, we lived in Los Angeles, and to have this honored some 50 years later is just a thrill.”

Goin’ to Kansas City Plaza was the dream of the local Enshriners group, a collection of local businessmen who contributed about half of the $300,000 it cost to build the project, with the other half paid by the city. Ollie Gates, a local businessman who runs the Gates BBQ restaurant chain and who has dedicated himself to urban and community development projects in the city, chairs the Enshriners.

The 12th and Vine street sign pays tribute to the spirit of the legendary 12th street, which from the 1920s through the next three decades was home to a strip of well-known jazz haunts that ranged from barrooms with bandstands to dancehalls to sophisticated supper clubs. Places like the Reno Club, the Jockey Club, Piney Brown’s Sunset Club, the Orchid Room and the Boulevard Room featured homegrown talents like Parker, Young, McShann, Basie, Red Holloway and Big Joe Turner as well as touring big bands that drew musicians and fans from across the Midwest. Prohibition in the ’30s began to put a dent on business, and clubs stopped hiring live musicians to save money, which led to the decline of the jazz scene.

The city’s renewed campaign to identify itself as a jazz history mecca is being marked in other ways, too. A few blocks away from the park is the historic 18th Street and Vine district, where revived jazz clubs are sprouting up near the stately American Jazz Museum (housed in the same facility as the Negro Leagues Baseball Museum). The museum operates the refurbished 1912 Gem Theater as well as the Blue Room, a revival of an intimate 18th Street club where live acts are booked. Other clubs include the brick-walled Jardine’s, the Phoenix Jazz Club and Bobby’s Hangout. Kansas City is also renovating a downtown area into an entertainment center with more than 26 new restaurants and clubs planned to showcase local and visiting musicians.

Further, jazz devotees in the town are determined to draw top-name jazz talent to the so-called “City of Fountains” and keep them there to help foster a thriving community of young artists. A few years ago, academic leaders were successful in recruiting eminent alto saxophonist and composer Bobby Watson to chair the jazz-studies department at the University of Missouri-Kansas City’s conservatory of music. And now a local group, the KC Sisters in Jazz, who consulted on the Goin’ to Kansas City Plaza project, just instituted an artist-relocation program to recruit talented musicians into the city’s musical, educational and social spheres. The first candidate: saxophonist Bobby Bryant Jr., son of the late Los Angeles recording artist and session player Bobby Bryant Sr.

Once a fixture of local clubs in Los Angeles’ African-American Leimert Park section, Bryant Jr. says he was struggling to get gigs, draw audiences and keep the bills paid when he was approached by Anita J. Dixon of KC Sisters in Jazz and Kansas City’s Cultural Convention and Visitors Services. Drawn to Kansas City by its lower cost of living, a promise of steady gigs, subsidized housing and a teaching commitment, Bryant Jr. has been living and performing there since February. “Los Angeles is more about the commercialism of music,” says Bryant Jr., who notes that current times are markedly different from his father’s era, when live television and film productions required live musicians and big-name jazz stars would often record with local players. “People in Kansas City are about business; they are about education and consciousness in jazz. And people have more resources here to make it happen.”

The least-known persons on the stage on Oct. 29 at the Kodak Theatre in Hollywood were a trio of young trumpet players: Jean Gaze from … END_OF_DOCUMENT_TOKEN_TO_BE_REPLACED

There are important jazz musicians who are more talked and read about than actually heard, and one is Albert Ayler. He did not record extensively. … END_OF_DOCUMENT_TOKEN_TO_BE_REPLACED

There’s something about cities that have distinct musical traditions within them,” says Aaron Levinson, producer of The Harlem Experiment. “It’s not an accident.” With both … END_OF_DOCUMENT_TOKEN_TO_BE_REPLACED

Marchel Ivery, a tenor saxophonist based in the Dallas area, died in his hometown on October 30th after a short illness. He was 69. Although … END_OF_DOCUMENT_TOKEN_TO_BE_REPLACED