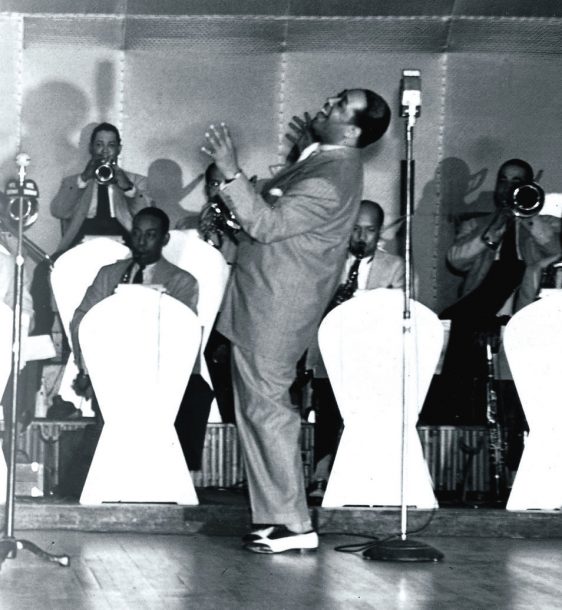 Question for an unwinnable debate: When did jazz begin? The RCA Victor Group decided that it began 100 years ago, more or less. That was a convenient justification for the company to mine its vast archives for significant recordings, launch yet another reissue program of artist samplers on its Bluebird label and call it The Centennial Collection. But, the RCA marketers must have asked, “How do we sell old material one more time?” Answer: Give them something to watch.

It’s a safe bet that most listeners under 60 have not seen the Centennial Collection artists in action, including Fats Waller, Benny Goodman, Artie Shaw and Coleman Hawkins. And except for seven previously unissued broadcast performances by Duke Ellington (with his seminal 1941 band at the Casa Manana in Culver City, Calif.) and three by Glenn Miller, all of the music on has been reissued many times. Thus, the hook: accompanying each CD is a DVD containing clips from movies and, on three of the discs, television. Strangely, the DVDs are not trumpeted on the packages as much as they deserve to be.

Series producer Barry Feldman worked with the wizardly Joe Lauro of Historic Films to come up with footage for the DVDs. “Historic is one of the leading stock footage houses,” Feldman said. “If you’re the History Channel and you need film of a cow in a field in 1942, Joe can find it. But he’s a jazz guy, one of the world’s big 78-rpm record collectors. He knows jazz inside out. If he doesn’t have the film you want, he knows where it is.”

The most familiar film Lauro found for Feldman is of Glenn Miller’s band in the 1941 feature film Sun Valley Serenade. The Miller disc also includes footage of his Army Air Forces Band and a jumble of bassist Trigger Alpert’s home movies of the musicians in which no one is identified. We see Waller in his big production number from 1935’s King of Burlesque and in soundies-short movies made for visual jukeboxes of the early ’40s-swinging, singing and mugging his way through four of his hits. The Goodman DVD presents the band in features from Hollywood Hotel, The Powers Girl, The Gang’s All Here and Stage Door Canteen, all motion pictures from the late 1930s and early ’40s. Sidemen are not identified, but we see Harry James, Lionel Hampton, Louie Bellson, Jimmy Rowles, Dave Barbour, Lee Castle and Teddy Wilson. The highlight of the Goodman pieces is Peggy Lee, luminous in her youthful beauty, singing her 1943 hit “Why Don’t You Do Right?”-a masterpiece of understatement and insinuation and a perfect marriage of singer and band. There’s also a 1960 appearance by Goodman and Red Norvo on The Ed Sullivan Show and footage of the clarinetist-convivial but exacting-rehearsing his small group, then performing at the 1966 Belgian Jazz Festival.

The Shaw DVD has his 1939 band in a movie short, Class in Swing, deconstructing and demonstrating arrangements partly by means of a skillful pre-digital special effect that pops the musicians into their chairs a section at a time, with 21-year-old drummer Buddy Rich being prominent in this sequence. Shaw and the band are superb in two pieces from the 1940 movie Second Chorus, and his DVD concludes with a 10-minute television interview in which Shaw, articulate and opinionated at 91, discusses the responsibilities of creativity and reflects on the accidental conjunction of art and popularity.

For Ellington’s DVD, Lauro says, “With Duke, we had infinite choices. We have an amazing Duke library. We even found a bit of him at a recording session in 1937 for Master Records, a label he was with very briefly, with Ivie Anderson-really great stuff.”

The Ellington DVD opens with the stunning “Symphony in Black,” made in 1934. The film is often mentioned because it includes the young Billie Holiday, but she is just one element in this portrait of the young maestro’s artistic maturity. Ellington said he was dissatisfied with the sequencing of the film’s segments, but it is undeniably powerful. Other shorts and soundies follow, with fine playing glimpses of Ben Webster, Barney Bigard, Jimmy Blanton, Ray Nance, Rex Stewart, Tricky Sam Nanton, Johnny Hodges and other Ellingtonians in their prime, and plenty of long looks at the leader. The disc also contains a substantial 1941 Ellington radio interview. Steven Lasker’s detailed program notes are a superb element of the Ellington package.

The Hawkins DVD is a joy. It is composed entirely of rarely seen television performances, and two clips show Hawkins with, among others, Danny Barker, Nat Pierce, Johnny Guarnieri, Milt Hinton and Cozy Cole. Three pieces are from Art Ford’s Jazz Party, a late-’50s TV series staged without affectation, in the spirit of the jam session. Trumpeter Charlie Shavers was the ad hoc leader, but Hawkins is an equally powerful presence. The intergenerational rhythm section is made up of Willie “The Lion” Smith, Sonny Greer, Vinnie Burke and guitarist Dickie Thompson. The horn players-many of them unidentified-include J.C. Higginbotham, Pee Wee Russell and Lester Young. It is fascinating to detect Hawkins’ bemusement or irritation at the Lion’s failure to find the changes to “Indian Summer,” to watch the dapper and confident Greer in action at the drums, to revel in Russell’s endearing aural and visual eccentricities and to be astonished again by Shavers’ energy, fire and precision. But, most of all, it is moving to hear and see Young and Hawkins trade fours on “Jumpin’ With Symphony Sid,” the patriarchs of the tenor saxophone together not long before Young died. “That was my greatest discovery,” Lauro says.

Over the years, RCA Victor has had starts, stops, fumbles and missteps in the reissue field, but The Centennial Collection series is a winner.

The least-known persons on the stage on Oct. 29 at the Kodak Theatre in Hollywood were a trio of young trumpet players: Jean Gaze from … END_OF_DOCUMENT_TOKEN_TO_BE_REPLACED

There are important jazz musicians who are more talked and read about than actually heard, and one is Albert Ayler. He did not record extensively. … END_OF_DOCUMENT_TOKEN_TO_BE_REPLACED

There’s something about cities that have distinct musical traditions within them,” says Aaron Levinson, producer of The Harlem Experiment. “It’s not an accident.” With both … END_OF_DOCUMENT_TOKEN_TO_BE_REPLACED

Marchel Ivery, a tenor saxophonist based in the Dallas area, died in his hometown on October 30th after a short illness. He was 69. Although … END_OF_DOCUMENT_TOKEN_TO_BE_REPLACED