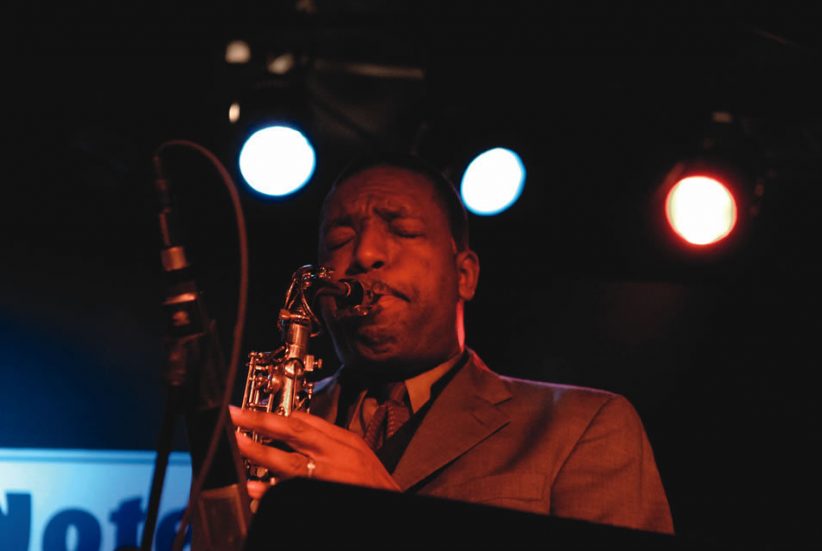 New York’s Blue Note was packed on June 5 to celebrate the 45th anniversary of Impulse Records.

The centerpiece of Impulse’s anniversary is The House That Trane Built: The Story of Impulse Records (W.W. Norton) by Ashley Kahn, whose previous works focused on individual albums: Kind of Blue by Miles Davis and A Love Supreme by John Coltrane. The author traces the Impulse story in a thorough but highly readable narrative sprinkled with reminiscences from Impulse musicians and behind-the-scenes figures. Along the way, Kahn manages to make many telling points about the record industry in general and the marketing of jazz in particular.

The House That Trane Built is aptly named as Impulse will forever be identified with John Coltrane, who was responsible for the label’s most celebrated and best-selling body of work. But in addition to providing an outlet for the prophets of the “new thing,” Impulse also recorded transcendent works by swing icons Count Basie, Duke Ellington, Coleman Hawkins, Ben Webster Benny Carter, Johnny Hodges and Clark Terry, and even “traditional” artists like Pee Wee Russell and Henry “Red” Allen, whose utterly original sounds were, in their own way, as avant-garde as anything else on the label.

The Impulse story is also the story of its talented producers. The label was created as part of ABC-Paramount by Creed Taylor, who signed Coltrane in 1960. Bob Thiele, who guided Impulse from 1961 to 1969, forged a close relationship with Coltrane and was responsible for much of the label’s most enduring music. In the 1970s Impulse was run by Ed Michel, Steve Backer and Esmond Edwards. As Kahn said at the event, the personalities of the producers manifested themselves in the type of music that emanated from the label: “Creed was much more about careful planning and he loved arrangers and putting together the right elements. Thiele was more hands-off but would assert his musical tastes when needed, for example in asking Coltrane to do a ballads album or the summit meeting with Duke Ellington.”

Those of us who began buying records in the mid-1960s were drawn to the attractive orange and black gatefold albums with the glossy covers and heavy vinyl pressings. As a teenager, I bought more than a few Impulse releases whose music was beyond my comprehension simply because the packaging was so compelling. Unlike competitors Blue Note and Prestige, who produced great music through a more formulaic approach, an Impulse album had a concept. It may not have always worked, but when it did the music could be glorious. There were some stinkers, of course. Phil Woods still cringes at the mention of Greek Cooking, which featured him with a bouzouki player, and Clark Terry’s It’s What’s Happenin’ was an example jazz’s mercifully brief flirtation with the electronic Varitone attachment. Impulse also produced what, by my totally unscientific survey of record stores in the 1970s, might have been the most remaindered LP of all times: Americans in Europe, Vol. 2.

Kahn points out that, although Impulse was subject to the vicissitudes of the music industry, “they were aware that jazz was very much about ‘catalog.’ Bob Thiele wanted to record music that that would be valid down the road and to have stuff in the vaults. That’s why he had Coltrane come in and record in the evening without the permission of the higher-ups, or why he did things like Benny Carter’s Further Definitions or Earl Hines’ Once Upon a Time.”

Kahn’s work deals with the Impulse “mystique” but the author sees his book as a bridge to the music, not as an end unto itself: “By using a framework that differs from the standard biography or history, I tried to get people excited about this incredible musical legacy.”

Fortunately, at the Impulse anniversary party at the Blue Note the focus was also on the music, with speeches kept to a minimum. McCoy Tyner was the natural choice to lead the all-star Impulse tribute band because of his contributions to the Coltrane classics as well as his own superb dates for the label as a leader. “Of all the musicians I interviewed regarding their years with the label,” Kahn said, “McCoy was the most positive about his memories.”

And what was originally intended as just a one-off performance for Tyner and Co. has turned into an extended worldwide tour.

The band at the Blue Note included trumpeter Wallace Roney, trombonist Steve Turre, saxophonists Dave Liebman and Donald Harrison, bassist Charnett Moffett and drummer Eric Gravatt. Tyner seemed rejuvenated by the Impulse project. Like a latter-day Count Basie, he subtly guided his highly compatible group from the piano chair. His solos often took a lyrical bent but on occasion erupted in powerful, densely chorded statements harking back to the Coltrane era. The repertoire included some of the Impulse classics, including Coltrane’s “Crescent” (a feature for Liebman) and Oliver Nelson’s “Stolen Moments.” What had been cutting-edge some 40 years ago was now mainstream, but the music was no less stimulating to players and listeners alike. The arrangements by Bob Belden featured lots of blowing space with judiciously placed ensemble riffs. All of the horn players contributed trenchant solos, Moffett’s bass work was at once entertaining and supremely musical and Gravatt was solid and swinging. But the piece that got the greatest response was Tyner’s moving trio rendition of his “New Orleans Blues,” in which the pianist limned a veritable history of jazz piano.

Verve president Ron Goldstein in his brief remarks affirmed Universal’s commitment to keeping the Impulse imprint alive. But reissues aside-including several new Best Of discs and a four-CD label overview-new projects have been few and far between since a flurry of activity for Impulse in the late 1990s. The sounds of younger experimenters were the heart and soul of Impulse, but they are now the province of small independent labels or self-productions and that makes the vision of Creed Taylor, Bob Thiele and their associates even more remarkable.

The least-known persons on the stage on Oct. 29 at the Kodak Theatre in Hollywood were a trio of young trumpet players: Jean Gaze from … END_OF_DOCUMENT_TOKEN_TO_BE_REPLACED

There are important jazz musicians who are more talked and read about than actually heard, and one is Albert Ayler. He did not record extensively. … END_OF_DOCUMENT_TOKEN_TO_BE_REPLACED

There’s something about cities that have distinct musical traditions within them,” says Aaron Levinson, producer of The Harlem Experiment. “It’s not an accident.” With both … END_OF_DOCUMENT_TOKEN_TO_BE_REPLACED