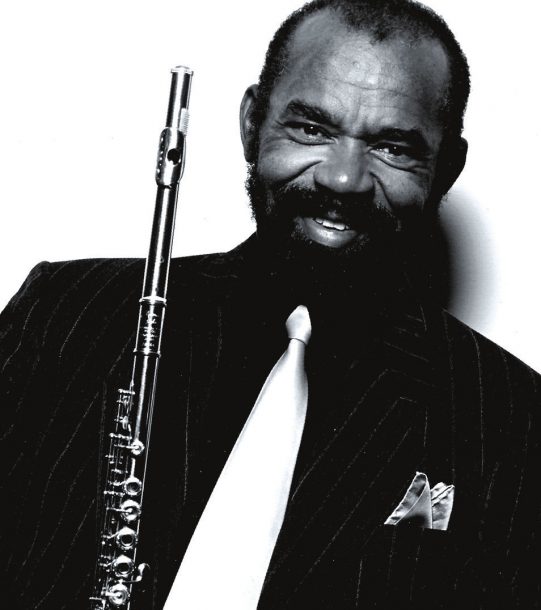 From the 1970s to early 1980s, Hubert Laws was more than a flute player-he was often the flute player. He won Down Beat’s top flutist award 10 times, garnered three Grammy nominations and continually scored high on the charts. Laws’ work on the CTI label in 1970s drew critical and commercial acclaim, and he was an equally compelling classical player and jazz-fusionist.

Despite all his talent, success and accolades, Laws slowly faded from the scene by the mid-’80s. Shows billed to the Laws Family-featuring singing sisters Eloise or Debra or Laws’ saxophonist brother Ronnie-were the best bets for catching the reclusive elder sibling. And Laws has recorded just five CDs over the last 20 years-a significant contrast to his previous near-annual output.

So what happened to Hubert Laws?

“When my children were born in 1985, I stepped out of the picture,” says Houston native Laws, now 64. “I didn’t stop playing; I practiced a lot and was a full-time dad. My kids didn’t have their mothers, and I had them right here in my home.” (Laws’ son, Sky, and daughter, Ashley, have different mothers.)

Understandably, Laws is anxious to get the creative juices flowing again. One of the original members of the Jazz Crusaders (1954-1960), Laws doesn’t reach back that far into his bag for the new Moondance CD on the reconstituted Savoy label. But the CD does evoke memories of Laws’ classic discs on CTI.

Laws says he didn’t consciously try to evoke his 1970s heyday on Moondance. “I first connected with Savoy; it was through Steve Backer, who worked with CEO Steve Vining and was impressed with the old CTI records. I think he consciously had a desire to reinvent that period more than I did. It was without any pressure though, and he just sort of mentioned, ‘That sounds like what you did at CTI.'”

While Laws has delved into world music, R&B and gospel as well as jazz, he’s always had a deep interest in classical music. In fact, Denon, Savoy’s classical offshoot, was one of the prime reasons Laws signed with the label in 2003. In 2002 he released Baila Cinderella, a tribute to French classical flutist Jean-Pierre Rampal, and Laws is currently working on a CD for Denon.

Even with his career revival kicking up, Laws says, “My son was trying to reprimand me and asked, ‘Dad how come you don’t play as often as you used to? We’re grown up now [and you’re free to do whatever you want].’ But I actually enjoyed my time with them, and it was like reliving my childhood. I used to change my brother Ronnie’s diapers. But heck-it’s nothing like having your own kids.”

Still, Laws says, “It’s not entirely my fault” that he hasn’t remained busy. “The music business has really changed quite a bit, and the people working on my behalf haven’t brought things to fruition as I imagined they would. I never really played a lot of clubs previously, and they’re working on getting me in universities and concert halls with symphonies. Recently, I got a ‘Lifetime Achievement Award’ in Las Vegas [from the National Flute Association], and played at the Arboretum in Pasadena in August with the California Philharmonic to 10,000 people, and the response was overwhelming.”

After years of relative silence from the flutist, the audience must have been welcoming Laws back to the scene. Chris J. Walker

The least-known persons on the stage on Oct. 29 at the Kodak Theatre in Hollywood were a trio of young trumpet players: Jean Gaze from … END_OF_DOCUMENT_TOKEN_TO_BE_REPLACED

There are important jazz musicians who are more talked and read about than actually heard, and one is Albert Ayler. He did not record extensively. … END_OF_DOCUMENT_TOKEN_TO_BE_REPLACED

There’s something about cities that have distinct musical traditions within them,” says Aaron Levinson, producer of The Harlem Experiment. “It’s not an accident.” With both … END_OF_DOCUMENT_TOKEN_TO_BE_REPLACED

Marchel Ivery, a tenor saxophonist based in the Dallas area, died in his hometown on October 30th after a short illness. He was 69. Although … END_OF_DOCUMENT_TOKEN_TO_BE_REPLACED