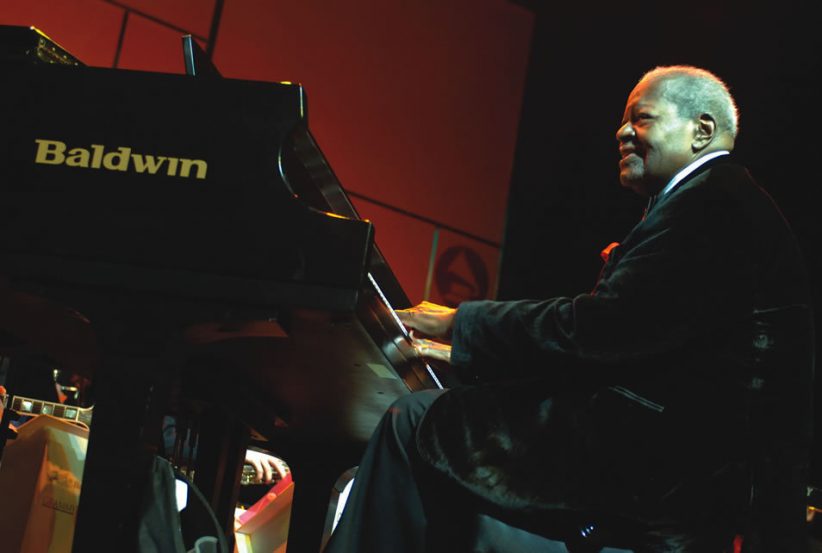 If this year’s Grammy awards for jazz and blues are any indication, old is the new new. Veteran jazz stalwarts beat out their younger counterparts in nearly every category. Sonny Rollins, Wayne Shorter, B.B. King and Pat Metheny all walked away with awards while Joshua Redman, Dave Douglas and Meshell Ndegeocello were shut out. Even Jelly Roll Morton, who died in 1941, was a winner-twice.

The usual spectacle of stars showed up for the ceremony February 8 at the Staples Center in Los Angeles. Though apparently it didn’t matter much to the viewing public, because no one showed up to watch the awards show on TV. Fox’s American Idol boasted nearly twice as many viewers. Not even Madonna performing with cartoons, the enigmatic and mohawked Sly Stone singing again and Teri Hatcher donning a transparent gown were enough to rustle up good ratings.

The live performances, which usually resemble the Super Bowl half-time show, featured a mix of young and old performers, often onstage at the same time. Herbie Hancock and Christina Aguilera performed their Grammy-nominated “A Song for You,” from Hancock’s Possibilities (Vector/Hancock). And Paul McCartney sang along with hip-hopper Jay-Z and rap-rock band Linkin’ Park, who dismantled “Yesterday.”

During the three-hour television broadcast, only 11 statues were doled out. Most of the jazz awards, along with nearly 100 other honors, were given out next door at the Convention Center in a ceremony lasting just over two hours.

The Convention Center is where Metheny picked up his trophy in the best contemporary jazz album category for 2005’s The Way Up (Nonesuch). The guitarist faced stiff competition in Douglas, Redman, Ndegeocello and saxophonist Bill Evans.

Rollins earned the Grammy for best instrumental jazz solo performance for “Why Was I Born?” from Without Song: The 9/11 Concert (Milestone), beating out Hancock, Ravi Coltrane and Wynton Marsalis.

Dianne Reeves garnered the award for best jazz vocal album for her soundtrack to the film Goodnight, and Good Luck (Concord).

The award for best jazz instrumental album by an individual or small group went to the Wayne Shorter Quartet for Beyond the Sound Barrier (Verve). The large ensemble honor went to Overtime (Dare2/Sunnyside) from the Dave Holland Big Band.

Palmieri’s Listen Here! (Concord Picante) was named best Latin jazz album. B.B. King took away the award for best traditional blues album for 80 (Geffen), while Delbert McClinton’s Cost of Living (New West) won for best contemporary blues album. Pianist Billy Childs won awards in two of the four categories in which he was nominated, including best instrumental composition (“Into the Light” from Lyric on ArtistShare/Lunacy) and best instrumental arrangement accompanying vocals (“What Are You Doing the Rest of Your Life?” from Chris Botti’s To Love Again: The Duets on Columbia). The Jelly Roll Morton box set The Complete Library of Congress Recordings by Alan Lomax (Rounder) earned two honors for best historical album and for best liner notes, which were written by jazz scholar John Szwed. The best traditional pop album award went to Tony Bennett’s The Art of Romance (Columbia).

Earlier in the week, pianists Barry Harris, Hank Jones and Oscar Peterson were honored for their lasting contributions to jazz during the black-tie ceremony “A Grammy Salute to Jazz,” which featured performances from all three legends.

Like this year’s Super Bowl, the 2006 Grammy’s started slow but picked up steam as the night wore on. The TV broadcast concluded with a moving tribute to New Orleans music featuring pianist Allen Toussaint performing “Yes We Can Can,” which was on the recent benefit compilation Our New Orleans (Nonesuch). Thankfully, it proved that the 2006 Grammys had more in common with this year’s Super Bowl than just kitschy live performances and a five-second TV delay.

The least-known persons on the stage on Oct. 29 at the Kodak Theatre in Hollywood were a trio of young trumpet players: Jean Gaze from … END_OF_DOCUMENT_TOKEN_TO_BE_REPLACED

There are important jazz musicians who are more talked and read about than actually heard, and one is Albert Ayler. He did not record extensively. … END_OF_DOCUMENT_TOKEN_TO_BE_REPLACED

There’s something about cities that have distinct musical traditions within them,” says Aaron Levinson, producer of The Harlem Experiment. “It’s not an accident.” With both … END_OF_DOCUMENT_TOKEN_TO_BE_REPLACED