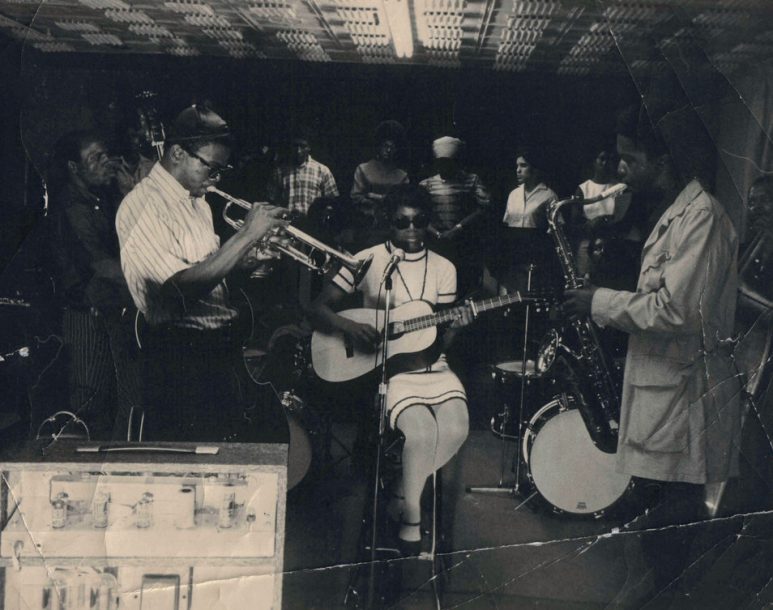 Eddie Gale on trumpet with his sister Joann on guitar

Eddie Gale won’t stop playing me his new music over the phone. I get in one question, and the 62-year-old trumpeter politely answers and immediately jumps to playing another track off his upcoming CD, Hi-Tech Beat.

But the reason I’m calling Gale is to find out more about two fascinating records he released on Blue Note more than 30 years ago: Ghetto Music (1968) and Black Rhythm Happening (1969). Both discs were recently reissued by the Runt family of labels: the CD versions came out on Water Music and the 180-gram HQ vinyl editions, in snazzy gatefolds, came out via 4 Men With Beards. (Hi-Tech Beat will also come out on a Runt subsidiary, Black Beauty).

The Brooklyn-born Gale was an active participant in the New Thing scene in the ’60s, playing with Sun Ra, Cecil Taylor (Unit Structures, Blue Note) and Larry Young (Of Love and Peace, Blue Note) among many others. Those associations led him to Blue Note, whose Francis Wolff offered him a contract. Ghetto Music features two bass players-Judah Samuels and James “Tokio” Reid-and two drummers-Thomas Holman and Richard Hackett-as well as tenor saxophonist and flutist Russell Lyle. Black Rhythm Happening trades Reid for Henry Pearson and adds reedist Roland Alexander, alto saxophonist Jimmy Lyons, drummer Elvin Jones and John Robinson on African percussion. What both albums share-in addition to lots of avant soul and the trumpeter’s sister, Joann Gale Stevens, on folk guitar-are the 11 lively voices of the Noble Gale Singers, which lift the records to the level of a spiritual throwdown.

Gale calls the music he was going for then “ghetto music,” because it came out of the streets he grew up on. “[That neighborhood] had all these elements to draw on,” Gale tells Andrew Raffo Dewar in the vinyl version’s new liner notes; the CD versions have only the original ones. “That’s why this is ghetto music, because it comes from all of us that lived in that area of the city, that lived this life of music, going to school, learning and growing up. It was all-encompassing.”

His contract with Blue Note ended because United Artists bought the label. Gale left New York in 1971 to become artist in residence at Stanford University in California, and in 1972 he decided to make San Jose his new home.

Gale remained busy in the Bay Area music world, but he didn’t record anything under his own name. He did hook up with Sun Ra again for tours and for records (Lanquidity and The Other Side of the Sun, both 1978; On Jupiter, 1979). In 1992 he made A Minute With Miles for Mapleshade, and he’s released a few meditative CDs on his own label, InterJazz. But Ghetto Music and Black Rhythm Happening are still Gale’s definitive statements.

With the renewed interest in his work, I wondered if Gale had any plans to put together a new version of his large ensemble and see what happens. “I’ve bounced the idea off some people,” he says, “so maybe when I go back East….”

Sister Joann is now a journalist in Washington, D.C., and Gale thinks she would dust off the guitar and join the group again for a few concerts. I hope she busts out those fly sunglasses too.

The least-known persons on the stage on Oct. 29 at the Kodak Theatre in Hollywood were a trio of young trumpet players: Jean Gaze from … END_OF_DOCUMENT_TOKEN_TO_BE_REPLACED

There are important jazz musicians who are more talked and read about than actually heard, and one is Albert Ayler. He did not record extensively. … END_OF_DOCUMENT_TOKEN_TO_BE_REPLACED

There’s something about cities that have distinct musical traditions within them,” says Aaron Levinson, producer of The Harlem Experiment. “It’s not an accident.” With both … END_OF_DOCUMENT_TOKEN_TO_BE_REPLACED

Marchel Ivery, a tenor saxophonist based in the Dallas area, died in his hometown on October 30th after a short illness. He was 69. Although … END_OF_DOCUMENT_TOKEN_TO_BE_REPLACED