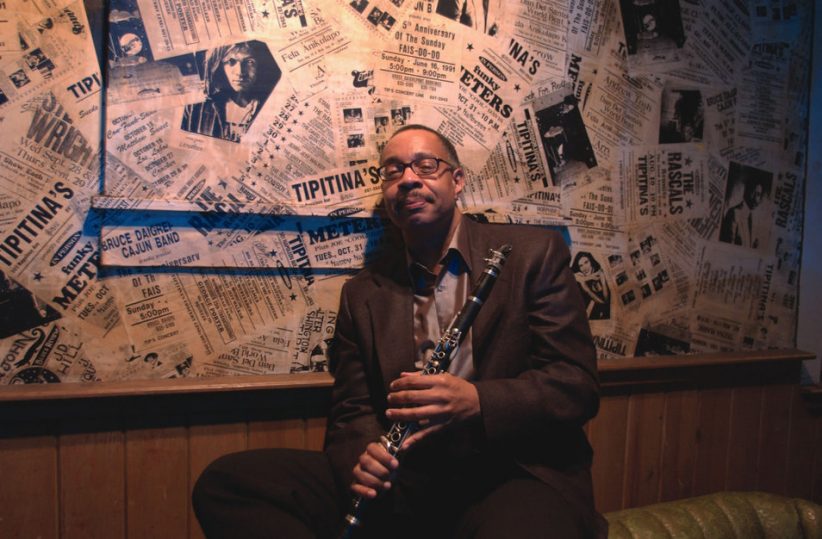 Clarinetist Dr. Michael White thoroughly knows and loves New Orleans. He’s been playing gigs around there for over 30 years and also is an endowed chair of African-American studies and Spanish at Xavier University. Nevertheless, Algiers, La., across the Mississippi River from the Crescent City, was a place he knew mostly through local folklore. That all changed when White got a request from his protege, clarinetist Ben Schenck (leader of the klezmer-oriented Panorama Jazz Band), and his wife-to-be, Ama Rogan.

“I was invited to play an original song for their wedding,” White says at a French Quarter restaurant, downing glasses of water after doing an in-store performance and CD signing. “I had not heard of A Studio in the Woods where the ceremony was at. When driving there, I was kind of mad, because it was so far out, and to go somewhere in the city limits that takes 40 minutes is unusual. But from the minute I turned into the woods, it was like being transformed into another space and time.”

After the wedding, White, enthralled by the calm and natural splendor, started inquiring about the grounds. In response, Joe and Lucianne Carmichael, owners and residents for the last 35 years, told the 49-year-old clarinetist about their artists’ retreat, which is situated on a 10-acre preserve. Up to that point, visual artists had done residencies at A Studio in the Woods, but never a musician. “[The Carmichaels] told me they were thinking about contacting me,” White says, “and I guess you could say the rest is history.”

Approximately a year later, in late November 2003, the scholarly clarinetist began his two-month residency at the retreat. One of the conditions of the program was that White had to compose an original piece of work. In preparation for that, he brought plenty of his favorite CDs, inspiring literature, method books and, of course, his horn. “Once I got out there and started settling in, the realization hit me,” he says. “I didn’t know what the hell I was going to do.” Mysteriously, much like the tales the clarinetist heard about Algiers when growing up, a force seemed to take over and guide him. White started becoming fixated on Algiers’ history, including a notorious Maroon leader, St. Malo, as well as by the area’s musicians and voodoo. “I thought about things in the environment I was seeing [and hearing]” he says, “such as the Mississippi River, trees and animals. Plus, I didn’t have to worry about time, eating or any outside interference. I had total freedom to operate, and song ideas starting opening. I also wrote more prolifically-I hadn’t written 24 songs in my entire life.”

The soulful CD Dancing in the Sky (Basin Street) is the outcome of his odyssey. The album’s opening track, “Algiers Hoodoo Woman,” has an intriguing storytelling aura, with White, guest trumpeter Nicholas Payton and trombonist Lucien Barbarin all mimicking provocative raconteurs. Alternately, “Give It Up” captures the jubilation of second-line dancing, with a distinctive ethnic tinge. The ballad “When the Mighty Mississippi Sleeps” captures the mood of the river, and “The Hag’s Rag” is based around Scott Joplin’s rags. Interspersed among the instrumentals, trumpeter Greg Stafford sings the title track a la Louis Armstrong, while Thais Clark’s singing on “Angel in the Day (Devil at Night)” is reminiscent of Bessie Smith and Ma Rainey.

White says A Studio in the Woods allowed him to produce Dancing in the Sky because “I became more in touch with myself, my feelings and my true spirit.”

The least-known persons on the stage on Oct. 29 at the Kodak Theatre in Hollywood were a trio of young trumpet players: Jean Gaze from … END_OF_DOCUMENT_TOKEN_TO_BE_REPLACED

There are important jazz musicians who are more talked and read about than actually heard, and one is Albert Ayler. He did not record extensively. … END_OF_DOCUMENT_TOKEN_TO_BE_REPLACED

Marchel Ivery, a tenor saxophonist based in the Dallas area, died in his hometown on October 30th after a short illness. He was 69. Although … END_OF_DOCUMENT_TOKEN_TO_BE_REPLACED