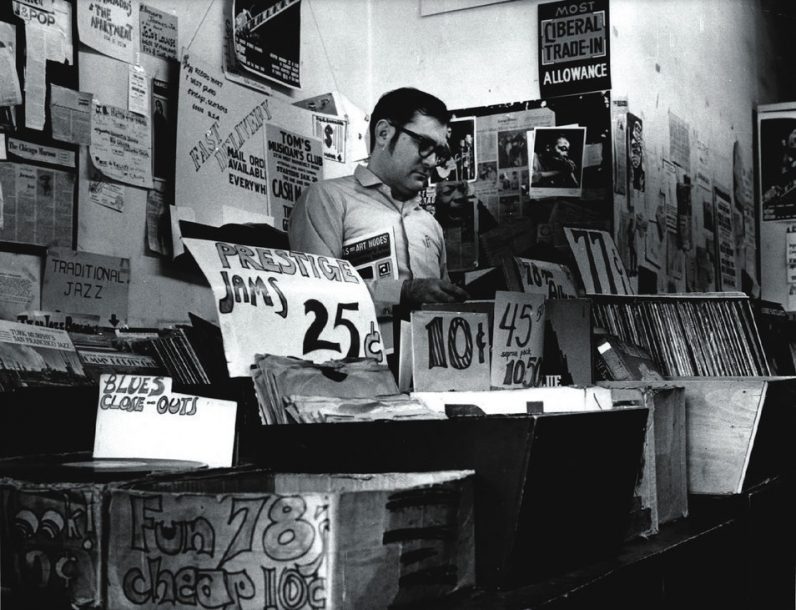 Bob Koester at one of the old Jazz Record Mart locations 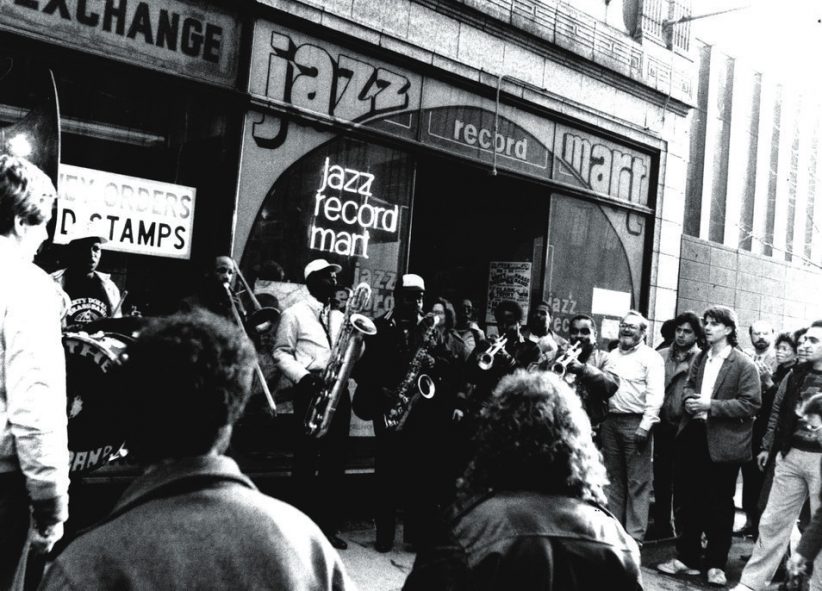 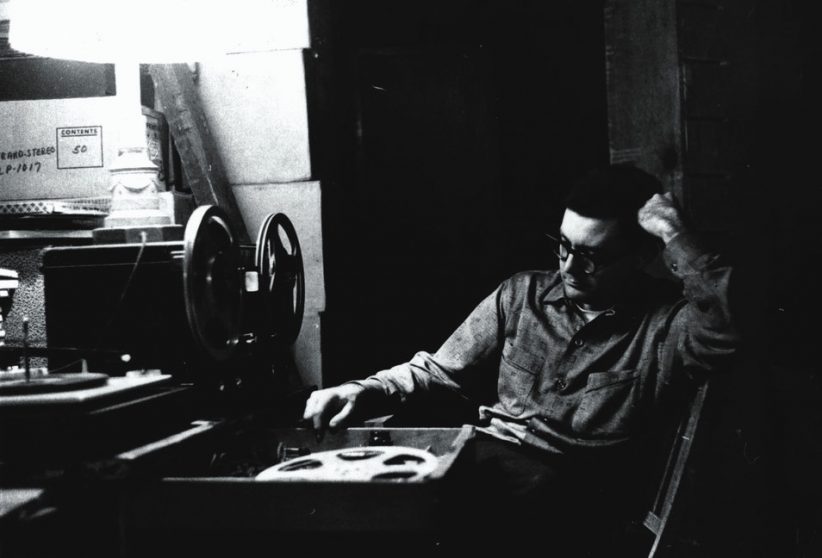 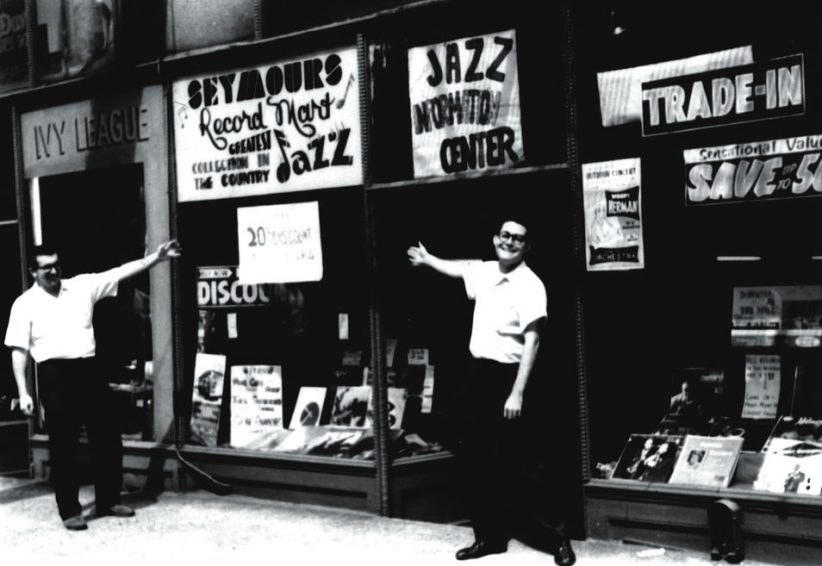 On September 19, 1953 Bob Koester became a “record man.” Koester was a 19-year-old trad-jazz devotee and college student at St.Louis University when he pressed up 400 red vinyl 10-inch copies of “Royal Garden Blues” by a local trad-jazz group, the Windy City Six. He stored the 78s in his dormitory room and named his label Delmar Records after Delmar Ave., the swingingest strip in St.Louis. Fifty years later, and with the ‘k’added because of a trademark conflict, Delmark and Koester are still going strong.

Although his passion was always jazz, Koester’s original plan was to get into film. “I knew I had entrepreneurial tendencies and thought I ought to take some business courses, so I went to St.Louis University with the idea of getting into cinematography. My parents, who were ardent Catholics, told me I had to go to a Jesuit college. So rather than go to Loyola in New Orleans or Chicago I figured I’d go to St.Louis U since it was closer to home for the trips back and forth. I knew it wouldn’t have as much jazz as Chicago and New Orleans, but when I got to St. Louis I discovered that [former Basie alto saxophonist] Tab Smith was playing half a block east of the campus, the ragtime pianist Charles Thompson had a tavern a couple more blocks east from there, and just down the street from that was a black jazz joint where Art Blakey, Miles Davis, Johnny Hodges and Horace Silver and different name people would come. Then a block north of the campus was a place called the PinUp Room, which had switched its policy to trad jazz. They had a group called the Windy City Six. So I spent my college years in those clubs, and I also spent a lot of time going to secondhand stores looking for old records. I was right in the middle of it all and this wonderful music just seduced me.”

Shortly after a trip to Chicago in 1958 to buy some recording masters, Koester relocated his fledgling operation there. In 1959, he purchased Seymour Schwartz’s Jazz Record Mart at 439 S.Wabash Ave.and continued to record artists on his Delmark label, gradually but grudgingly expanding his horizons from his beloved trad jazz into bebop and the avant-garde with recordings by the likes of Ira Sullivan,Johnny Griffin,Roscoe Mitchell and Anthony Braxton. On the blues side, Koester hit the jackpot in 1965 with Junior Wells’ Hoodoo Man Blues. That record introduced the tough, soul-drenched West Side sound to blues record buyers and opened the door for the likes of Magic Sam,Otis Rush and Carey Bell.

Delmark’s diverse legacy is celebrated with two new, budget-priced doublediscs, both titled Delmark: 50 Years of Jazz and Blues, with the two genres split into their own collections. The Jazz edition has 28 songs, including previously unissued tracks by Sonny Stitt and Tab Smith,as well as tunes by the Windy City Six, Coleman Hawkins, Sun Ra, Illinois Jacquet, Archie Shepp, Ken Vandermark and more. Blues features 32 songs, including previously unissued tracks by Junior Wells, Magic Sam, Big Joe Williams and more as well as cuts by Otis Rush, Little Milton and Albert Ammons. You can also buy the two collections together as the Jazz & Blues Box Set, which includes a bonus DVD featuring Down by the Riverside, a video montage of recent Delmark recording sessions and performances, and the documentary A Tribute to Delmark Records.

Today Koester is a revered if irascible Windy City institution. His Jazz Record Mart-which after two moves is now at 444 North Wabash Ave. (and on the Web at jazzmart.com)-is regarded as a mecca among serious jazz and blues collectors from all over the world,and Delmark continues to document significant voices from the jazz and blues worlds that otherwise might never be heard. “Well, it pretty much began as a hobby-a hobby within a hobby,”says the 70-year-old Wichita, Kan., native. “The store was a hobby, and the label became a hobby within that.”

Fifty years later, Koester remains as committed as ever to trad jazz (don’t ever call it Dixieland in Bob’s presence; he cringes at the term with its connotations of straw hats, blazers and Confederate flags) while continuing to put out a wide range of releases-not all of which he likes. “I’ve recorded stuff over the years that I personally am not too fond of. The avant-garde does leave me cold. Except that from a historical perspective: first there was Jelly and then Louis and Eldridge and Dizzy and so you figure Lester Bowie is the new guy.

“Sometimes you record a guy and think, ‘Well, he’s not great, but he’s awfully good and he oughtta have a record.’ But I find it increasingly difficult to find mainstream musicians worth recording. There’s a stunning lack of originality going around-a tremendous amount of chops and sometimes a little more interest in chops than balls. And it’s kinda sad. I mean, it’s happening in trad jazz also, although the chops in trad have never been anything to write home about.”

Delmark’s ability to survive so long in a field that has seen so many other independent labels go under is due primarily to the constant influx of revenue from the Jazz Record Mart, which Koester acknowledges as his bread and butter. “The formula for my operation is an obvious one. It came from Milt Gabler, who ran the Commodore Music Shop in New York and eventually began tapping into the till to do record dates in 1938. It’s an old classic formula used by other labels like Keynote, Musicraft, Dial, Jazzman, Rialto, Prestige-all these record store labels that were thriving at one time. So far, it’s worked for me too.”

Still, like most labels, Delmark has felt the effects of a recent industry slump. “The record store is affected only 20 percent, but the label is down more than 50 percent from three or four years ago,”Koester explains. “We’ve cut our recording program by more than twothirds-from 18 to 20 new records a year to just half a dozen. And I just hate it when I have to turn stuff down. Roscoe Mitchell wants me to record a 15- piece band that’s going to do an orchestral version of Sound [his monumental 1966 Delmark recording that effectively introduced the AACM to jazz fans] at this year’s Chicago Jazz Festival. And it’s just not financially feasible for me, unless the guys want to work for a hundred bucks a man or something. But I wouldn’t even ask them to do that.” (Koester says that artistic budgets at Delmark range from $5,000 to $10,000-a far cry from major label money).

Perennial sellers from the catalog like Hoodoo Man Blues (about 4,000 copies per year) and Coleman Hawkins’ Rainbow Mist (from the 1940s, Harlem-based Apollo Records, which Koester secured rights to) help offset costs for recording new CDs. (“I think it was Bob Weinstock who said, ‘You don’t understand! Jazz isn’t for releasing. It’s for reissuing.’ And it’s certainly true.”)

And revenue from licensing deals with Hollywood for movies and TV shows have helped make ends meet. “I rarely say no to these kind of licensing deals. The one time I said no to a film company they came back and offered me 10 times as much money. So I said yes. And when these things come in I think,’OK, that’s going to handle the payroll for the next three months.’

“I dunno, sometimes guys go bankrupt because they get tired of the business. I don’t foresee Delmark going that way. My son Robert is involved in the business. So is my wife, Sue, and my daughter Kate. And Steve Wagner, our general manager,has done great things for us since coming onboard in 1987. He does the day-to-day management, he understands my quirks and my love of trad jazz, so to me he’s the ideal manager. So I think we’ll be in good hands for some time to come.”

The least-known persons on the stage on Oct. 29 at the Kodak Theatre in Hollywood were a trio of young trumpet players: Jean Gaze from … END_OF_DOCUMENT_TOKEN_TO_BE_REPLACED

There are important jazz musicians who are more talked and read about than actually heard, and one is Albert Ayler. He did not record extensively. … END_OF_DOCUMENT_TOKEN_TO_BE_REPLACED

There’s something about cities that have distinct musical traditions within them,” says Aaron Levinson, producer of The Harlem Experiment. “It’s not an accident.” With both … END_OF_DOCUMENT_TOKEN_TO_BE_REPLACED

Marchel Ivery, a tenor saxophonist based in the Dallas area, died in his hometown on October 30th after a short illness. He was 69. Although … END_OF_DOCUMENT_TOKEN_TO_BE_REPLACED