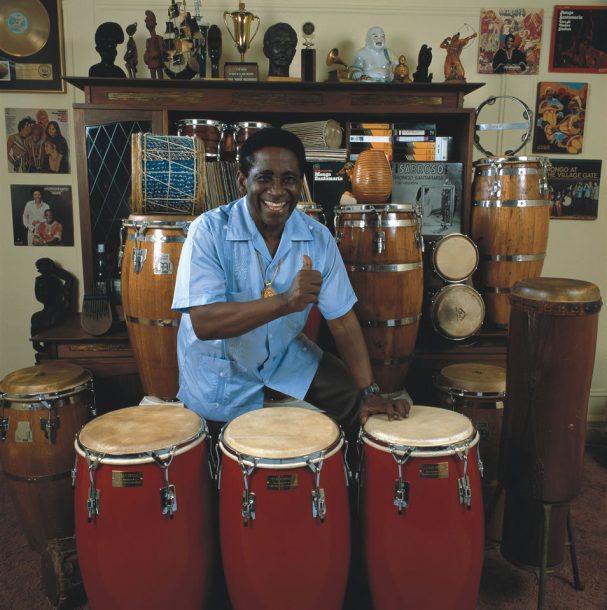 Owning the first Ford dealership in the San Francisco suburb of Concord, Calif., set up Carl Jefferson pretty well. So he took his money and his vision to the city’s Pow Wow Festival and turned it into the Concord Jazz Festival in 1969. In 1973 an extraordinary live recording was made of guitarists Joe Pass and Herb Ellis at the festival, and that album, Jazz/Concord, launched the Concord record label.

As label boss, Jefferson became a record producer by default. He began to sign established artists, often because other labels had dropped them. Vibraphonist Cal Tjader was among them, and in 1980 it was Tjader’s La Onda Va Bien that launched Picante-and won the label its first Grammy.

The new four-CD box set Concord Picante 25th Anniversary Collection celebrates the imprint’s longevity and success. From Tjader’s “Mambo Mindoro” to a remix of Tito Puente’s “Ran Kan Kan” by Thunderball and the Fort Knox Five, the collection gives the listener a true sense of where this music has been and where it’s going.

Picante has always presented the panorama of Latin jazz, as the 50-track set shows with the inclusion of diverse artists like Mongo Santamaria, Poncho Sanchez, Manfredo Fest, Charlie Byrd, Laurindo Almeida, Tania Maria and even Carmen McRae singing with Tjader.

“Carl Jefferson loved jazz and its variations,” says Nick Phillips, Jefferson’s former assistant and now vice president of artist and catalog development for Concord and producer of the box set. “Just seeing the way he made decisions and ran the company was a great experience. But his foremost criteria was that it was music that he personally liked.”

Concord Picante sparked a Latin-jazz revival in the recording industry. Other Latin-jazz labels sprang up, such as Tropijazz, the short-lived New York City label run by longtime booking agent Ralph Mercado. Blue Note started recording Cubans like Gonzalo Rubalcaba and later Chucho Valdes. But today Picante is the only label dedicated to Latin jazz in all its flavors.

Tjader wasn’t the only one to receive a career bump from Picante. The 1982 signing of his sideman Poncho Sanchez initiated the Chicano conga drummer’s career as a Latin-jazz bandleader. “When I joined Concord Picante it was a tiny company,” Sanchez says, “and there was hardly any budget. But nobody ever told me what I could or couldn’t do-even though Carl was always in the studio watching the clock.”

Picante’s first big seller was Tania Maria’s crossover hit “Come With Me,” the title track to her 1982 album. The song was the label’s first single and put the Brazilian singer-pianist on the map in the U.S. But in the long haul the former Tjader sideman-turned-bandleader has proven to be its most consistent hitter.

“Poncho Sanchez perhaps best exemplifies what Concord Picante is all about,” Phillips says. “He was on that first album with Cal, La Onda Va Bien, and continues to be loyal and dedicated to this label.”

“I hung tough with Concord even when it was barely hanging by a thread financially,” Sanchez says, “and look what it’s become. The little guy bought the big guy and now they own Fantasy, Riverside, Stax and other labels.”

The box set is presented in chronological order, and it features a well-detailed set of notes by jazz scribe Mark Holston. The cover artwork by Michael V. Rios, a San Francisco painter who worked with Santana for years, is an eye-catching collage of the many luminaries that have graced the label.

“I feel what has made Concord Picante a success,” Phillips says, “is that we’ve taken a broader view of what Latin jazz is. We didn’t go after specific markets. We just put out good music, and the markets found it.”

The least-known persons on the stage on Oct. 29 at the Kodak Theatre in Hollywood were a trio of young trumpet players: Jean Gaze from … END_OF_DOCUMENT_TOKEN_TO_BE_REPLACED

There are important jazz musicians who are more talked and read about than actually heard, and one is Albert Ayler. He did not record extensively. … END_OF_DOCUMENT_TOKEN_TO_BE_REPLACED

Marchel Ivery, a tenor saxophonist based in the Dallas area, died in his hometown on October 30th after a short illness. He was 69. Although … END_OF_DOCUMENT_TOKEN_TO_BE_REPLACED