Skip to content
Become a member and get exclusive access to articles, live sessions and more!
Start Your Free Trial
Home > News > Chicago Underground Trio: From Slon to Brazil 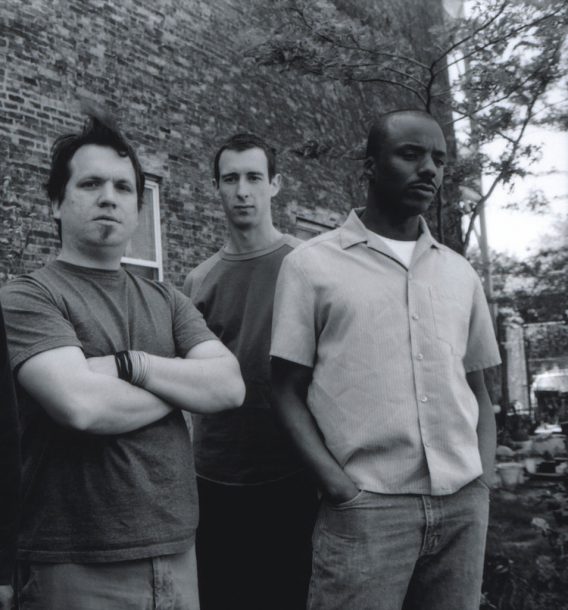 On the second day of the Chicago Underground Trio’s 2003 Central European tour, drummer Chad Taylor celebrated his birthday. It also happened to be the day American forces moved into Iraq.

After playing to a raucous, sold-out crowd that night, a dazed coronetist Rob Mazurek bought a bottle of plum brandy and wandered out into the area of Warsaw where the Jewish ghetto used to be.

The very next night, the band rolled into Lubiana, Slovakia, and found an anti-war demonstration buzzing on the street outside their hotel.

“[The hotel happened to be] just on the main road there,” remembers Mazurek. “I don’t think that they were protesting us. There was an amazing amount of people. I wanted to jump out there with them, but we had to go to soundcheck. When we went to the venue that night, there was this huge banner on top of this new structure in Lubiana that said ‘Chicago Underground Trio,’ and we said: ‘Oh yeah, that’s cool.’ Then we looked down on the concrete. Someone had spray-painted on the street ‘Die Yankees.'”

Americans clearly labeled and roaming abroad at an inauspicious time, the Trio had to navigate a tricky international situation and deal with what was for them a new musical situation: None of the members live in the same city anymore, and for over a year none of them even lived in Chicago (the third member of the trio, Noel Kupersmith, who isn’t even the band’s original bassist, has since moved back).

The band used to meet for regular gigs in Chicago, but now they only converge for recording sessions and tours. For the first time any of them can remember, they came together for this tour with little material worked out. “We hadn’t played together in a long time,” says Kupersmith. “We had no time to prepare, other than individually. We had no choice but to show up together and have at it.”

Mazurek and Kupersmith found themselves in a doubly confusing situation. They were absorbing all this as relatively recent expatriates. Mazurek married a Brazilian biologist and moved to his wife’s country a few years ago. Kupersmith had been living in France, and Taylor lives in New York City.

Kupersmith felt that this picaresque adventure of a tour in the middle of wartime directly impacted the band: “Being out in different places you get a different perspective. From a political perspective, watching what’s going on makes you think about things differently. For Rob [Mazurek], that was the first time he’s lived outside of the country, and it’s had a big effect on him. Rob and I bonded in that department for sure, and I think that fueled a lot of the music. It seems to me [that] there was a rawness, a feeling of urgency every night, every day. It had a big effect on the music.”

Almost immediately after the tour ended, the band jumped into a Michigan studio to record what would become its new Thrill Jockey release, Slon. Certainly, the recording delivers elements that have come to define the Chicago Underground blueprint: the minimalist bass lines, the Don Cherry-like upper register smears and gentle melodies from Mazurek’s coronet and the collision of acoustic music with electronic beats and clouds of static-all sewn together by Chad Taylor’s linear drumming. This time around, however, the band delivers the music with a new immediacy, a directness. The recording includes multiple first takes, and the band opted to tone down the studio trickery. There are few computer edits or overdubs.

The band took the name of the Slovakian hotel where the demonstrations took place for this recording, and it’s a particularly apt title. In a sense, Slon is an abstracted musical travelog-a meditation on the band’s time on tour. In another sense, the recording alternately transmits and refracts the music the band reconceived and generated on stage on that tour.

“That was absolutely the idea-to keep it true to what you hear live,” said Mazurek.

“Although some of the tunes we’d played before we went on tour, most of the music that’s on the record materialized in Europe,” Taylor says. “The whole tour was a pretty dramatic experience. We were all emotional, talking to people at all the gigs we were doing, just hanging out. The music felt very strong”

Increasingly interested in computer-generated music and pure sound, Mazurek will soon release a pair of solo records on the Mego and Enov labels. He’s getting ready to tour with his new band, Black Goat Ensemble, a group specifically designed for noise and extreme frequencies. He’s also been, oddly enough, sampling pulses and cluster chords generated by electric eels (his biologist wife introduced him to them). “It sounded very similar to things I was doing on the computer already,” Mazurek says. “It super-freaked me out, man.”

Kupersmith splits time between Underground projects and Brokeback with bassist Doug McCombs. Taylor plays in Sticks and Stones, a trio fronted by another former Chicagoan, Matana Roberts, as well as leading his own New York-based band, Active Ingredients, which just released a recording, Titration, on Delmark.

“The Chicago Underground is the center of a lot of things, at least for me,” Mazurek says, unfazed about the Underground’s diasporic situation. “It will for sure will keep recording and touring. We’ve been playing together for so long, we know how each other sound.”

“If we can live in different places and keep on going, then yeah,” laughs Taylor. “I don’t see anything that can get in the way.” If war can’t stop them, nothing can.

The least-known persons on the stage on Oct. 29 at the Kodak Theatre in Hollywood were a trio of young trumpet players: Jean Gaze from … END_OF_DOCUMENT_TOKEN_TO_BE_REPLACED

There are important jazz musicians who are more talked and read about than actually heard, and one is Albert Ayler. He did not record extensively. … END_OF_DOCUMENT_TOKEN_TO_BE_REPLACED

There’s something about cities that have distinct musical traditions within them,” says Aaron Levinson, producer of The Harlem Experiment. “It’s not an accident.” With both … END_OF_DOCUMENT_TOKEN_TO_BE_REPLACED

Marchel Ivery, a tenor saxophonist based in the Dallas area, died in his hometown on October 30th after a short illness. He was 69. Although … END_OF_DOCUMENT_TOKEN_TO_BE_REPLACED