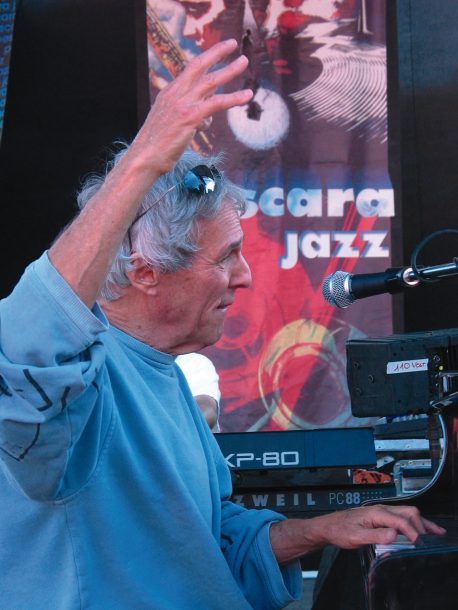 I knew I would be hearing Burt Bacharach at the Pescara Jazz Festival in Italy, but a CD arrived before I could scratch my head for too long about such a booking: Blue Note Plays Burt Bacharach is part of a series that includes jazz interpretations of the Beatles and Stevie Wonder culled from the label’s huge catalog. The CD’s 12 tracks feature people such as Stanley Turrentine, Richard “Groove” Holmes, Grant Green, the Three Sounds and Nancy Wilson performing Bacharach hits like “The Look of Love,” “What the World Needs Now,” “Do You Know the Way to San Jose,” “Walk on By” and “Alfie,” among others.

I talked to the silver-haired, slimly fit and casual 76-year-old Bacharach as he modulated through some nice voicings at soundcheck in Pescara. When I presented Bacharach with the Blue Note CD, which he wasn’t aware of, his immediate response was, “I’m going to play it in the car tonight.”

Born in Kansas City, Bacharach moved to Long Island with his family in 1932 when he was four. He hung out on 52nd Street in his teens, and Bacharach tells liner-note writer James Gavin that he used a fake ID to get into the clubs. When I brought up 52nd Street Bacharach immediately mentioned the Spotlite, a club where I spent many a night, and talked of listening avidly to Charlie Parker and Dizzy Gillespie. He also cited Tadd Dameron as one of his favorites. “When I hosted the Tonight Show for Johnny Carson, I was able to have Dizzy as one of my guests,” Bacharach recounted with obvious pleasure.

After the bebop masters Bacharach’s strongest influence was Darius Milhaud. “Before I went into the service during the Korean War I studied with Milhaud at the Music Academy of the West which was a summer program,” he says. “I wrote a ‘Sonatina for Violin, Oboe and Piano.’ There were five in the class, and we were writing in a modern style. I had been hanging out in New York with John Cage. The middle section of my piece was very melodic, and I worried that it was too melodic. Milhaud said, ‘Never be afraid to be melodic.'”

In fact Bacharach has built a career on melody, composing so many memorable themes. Jazz musicians have always been on the lookout for attractive melodies to interpret and many have found his songs appealing, though the composer has had his doubts. “I’ve sometimes felt that my songs are restrictive for a jazz artist. I was excited when Getz did a whole album of my music [What The World Needs Now: Stan Getz Plays The Burt Bacharach Songbook, Verve, 1968] but you’re never 100 percent sure of how good you are even after you’ve had success. But one night I had dinner with Miles Davis and he said, ‘”Alfie,” that’s a great song.'”

During 2004 it seemed to me that we have been hearing more of the great standards of the ’30s and ’40s. Did Bacharach feel that “good” songs were coming back? “Yes,” he said, adding, “but we need radio.” Then he spoke of the timelessness of those songs and cited Jerome Kern. “I love David Allyn’s album [A Sure Thing: David Allyn Sings Jerome Kern, Discovery, 1973]. Johnny Mandel told me that it was the first album that they let him write.”

Later that night, Bacharach and his ensemble performed an enjoyable concert of his music for an enthusiastic, full house at the Gabriele d’Annunzio amphitheater. When he sat at the piano and sang “Alfie” in his own bittersweet, low-key way, it was a great song one more time.

The least-known persons on the stage on Oct. 29 at the Kodak Theatre in Hollywood were a trio of young trumpet players: Jean Gaze from … END_OF_DOCUMENT_TOKEN_TO_BE_REPLACED

There are important jazz musicians who are more talked and read about than actually heard, and one is Albert Ayler. He did not record extensively. … END_OF_DOCUMENT_TOKEN_TO_BE_REPLACED

There’s something about cities that have distinct musical traditions within them,” says Aaron Levinson, producer of The Harlem Experiment. “It’s not an accident.” With both … END_OF_DOCUMENT_TOKEN_TO_BE_REPLACED

Marchel Ivery, a tenor saxophonist based in the Dallas area, died in his hometown on October 30th after a short illness. He was 69. Although … END_OF_DOCUMENT_TOKEN_TO_BE_REPLACED