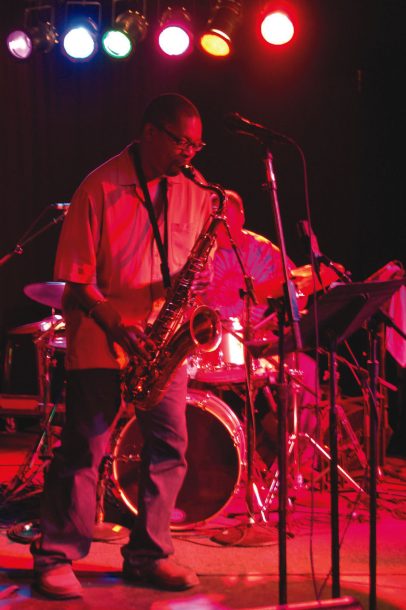 Despite its reputation as a hippie dustbowl in middle Tennessee, the 2007 edition of Bonnaroo featured a healthy dose of jazz, from venerated veterans to rising young stars.

With its declaration as a music and arts festival, Bonnaroo is mostly known for catering to fans of jam bands like Widespread Panic, the String Cheese Incident and Ratdog, featuring Bob Weir, the guitarist-singer with the Grateful Dead. Their connection to jazz is not incidental. Many bands featured at this year’s Bonnaroo, such as Tortoise and Tool, made direct connections to jazz in their music and their fans encourage experimentation and virtuosity in playing. With that in mind, having Somethin’ Else, an inaugural on-site jazz tent sponsored by Blue Note, made perfect sense.

The caliber of the festival’s jazz personnel was high, but there was another crucial reason why every jazz set, day and night, was filled to capacity: Air conditioning. With temperatures hitting well over 90 degrees, Somethin’ Else became a refuge for festivalgoers interested in cooling off and also being open to hearing music not booming from speaker stacks across acres of farmland. Designed as an intimate jazz club, complete with table seating, wait service and mood lighting, the 500-capacity tent became a focal spot at the festival for those with open ears interested in something exciting up close.

The bookings bridged generations and also displayed approaches to jazz that varied in shape and size. Saxophonist Lou Donaldson and Hammond B3 player Dr. Lonnie Smith, both Blue Note veterans from the 1950s and 1960s New York jazz scene, combined to help open the club on the first night, playing bebop and funk in a rarefied setting that ignited the room with the original fiery temperament of their earliest recordings.

The tent also became a place where late-night collaborations took place between young up-and-comers and players dropped in from different worlds. For starters: Wilco guitarist Nels Cline shared the stage with free-jazz drummer Scott Amendola, and the Philadelphia Experiment united ?uestlove of the Roots, keyboardist Uri Caine and bassist Christian McBride. Stanton Moore, the founder and drummer of the New Orleans funk band Galactic, played a special opening-night set of solo material in a trio. The tent also featured piano trios, contemporary free-jazz stars and players from far-ranging locales such as Paris and West Africa.

Then there were headliners who needed no novelty. Ravi Coltrane played two sets with his quartet Friday. At age 42, he still faces the challenge of following his father. Switching between alto and tenor saxophones, Coltrane played a methodical set that featured odd, interloping meters, tempo shifts, but also straightforward ballads. He used his instrument to make short bursts and then droning incantations. On the song “The 13th Floor,” he played to sound like a waterfall through heavy waves of sound and mesmerizing dynamics.

Stefon Harris is considered his generation’s premier vibraphone player, but his set-backed by the quintet Blackout-stretched boundaries by incorporating synthesized space effects and many left-turn interludes. He took a cue from the jam-band handbook and announced he wouldn’t follow a set list. Instead, moving his mallets (sometimes a total of six) across two sets of vibes, he and his band played songs at length that took many dramatic turns, winding down to murky endings. The conversations between Harris and his rhythm section was fascinating-they chased one another, interlocking poly-rhythms until working their way out together.

The weekend peaked on Sunday with a set by Ornette Coleman, who played outside and under the Other Stage tent, a much bigger setting, in the early evening. His band-bassists Gregory Cohen and Tony Falanga plus son and drummer Denardo Coleman-kept pace with Coleman who put down his saxophone at times to play fiddle and trumpet.

Coleman, 77, provided an unusual picture. In the 90-plus-degree heat, he wore a canary-colored suit and porkpie hat. He played with intermittent bursts of energy, mixing the high, flinty sounds from his saxophone with the dissonance he encouraged with his fiddle. With the Dead’s Bob Weir watching from the side (Coleman often sat in with the Dead in the early 1990s and is cited as one of their chief influences), the players each created their own composition while staying within strict time.

Despite the excitement in the air, the set came to an unexpected end less than halfway through. Coleman fell to the floor while playing, which briefly confused the crowd and sent Coleman’s son crashing over his drum kit to help him up. Coleman appeared confused and yawned as if waking up. Billboard later reported he suffered heat stroke and was given intravenous fluids in an onsite medical tent before being rushed to a local hospital, where he rested and was released later that night.

Yet even without knowing that outcome, the crowd clapped as Coleman was escorted offstage. Sometimes you have to take what you get and be consider yourself lucky.

The least-known persons on the stage on Oct. 29 at the Kodak Theatre in Hollywood were a trio of young trumpet players: Jean Gaze from … END_OF_DOCUMENT_TOKEN_TO_BE_REPLACED

There are important jazz musicians who are more talked and read about than actually heard, and one is Albert Ayler. He did not record extensively. … END_OF_DOCUMENT_TOKEN_TO_BE_REPLACED

Marchel Ivery, a tenor saxophonist based in the Dallas area, died in his hometown on October 30th after a short illness. He was 69. Although … END_OF_DOCUMENT_TOKEN_TO_BE_REPLACED