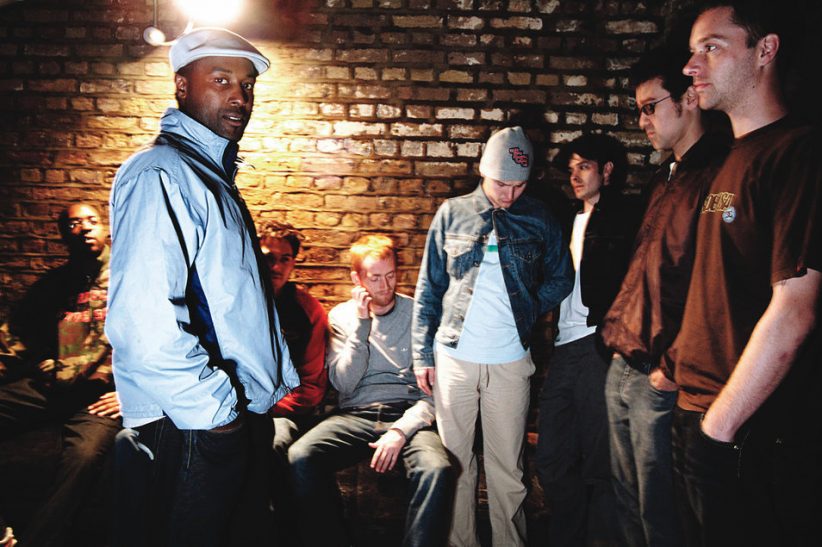 Bugz in the Attic

Blue Note’s 1970s catalog is something that many jazz purists loathe passionately, viewing it as a musically vapid period when commercial fads superseded artistic integrity. For many DJs, however, that period was a fertile ground of new sonic and compositional experimentation in which jazz artists such as Donald Byrd, Bobbi Humphrey and Jack McDuff explored the interlocking rhythmic friction and melodic/harmonic simplicities of R&B and funk-hence Blue Note Revisited, the label’s latest exploration into DJ culture.

Obscure ’70s cuts such as Eddie Henderson’s “Kudu” and Gene Harris’ “Los Alamitos Latinfunklovesong” are reimagined into ultrafunky joints by Kyoto Jazz Massive and Bugz in the Attic, respectively. Horace Silver’s Age of Aquarius-laced “Won’t You Open Up Your Senses” is lovingly rendered by British electronica duo 4Hero, featuring vocalist Vanessa Freeman (who also sings on “Kudu”). And Eddie Gale’s Black Nationalist avant-funk anthem “Song of Will” gets tweaked into an haunting jazztronica excursion by Jazzanova.

In some ways, Revisited picks up where Madlib’s Shades of Blue left off last year in its journey through the label’s lesser-known gems and its extension of the remix concept beyond merely retooling the tune with bleeps and beats. For instance, 4Hero’s reworking of “Won’t You Open Up Your Senses” and Bugz’ “Los Alamitos Latinfunklovesong” are complete covers with no sampled traces of the original source material.

“We wanted to create a similar vibe on the record,” says Marc Mac, who with Dego (no last name) is 4Hero. “Dego and I basically broke the song down and decided who was going to work on the chord section and who was going to work on the bass section. On our track, Dego plays keyboards and I play bass. We had Luke Parkhouse, our usual drummer, play on it, and we added horns.”

Fellow London broken-beat mavericks Bugz in the Attic took a similar collective approach with “Los Alamitos Latinfunklovesong,” enlisting 13 programmers and musicians including singers Bembe Segue, Rasiyah and Deborah Jordan, keyboardist Kaidi Tatham, guitarist Dave Okumu, drummer Leo Taylor, cellist Izzi Dunn and violinist Stella. “Because it was done as a cover, we didn’t have to fit anything that was of the wrong tempo or whatever,” says Bugz member Orin Walters. “Not to say [that doing a cover] was easy by any means-it took a long time. But when you’re remixing the problem quite often is taking parts that were recorded for a different version and getting in to fit.”

Many of Revisited’s bona fide remixes are just as musically intrepid as the covers. DJ Spinna keeps the Mizell Brothers’ gritty urban production intact on Byrd’s “Lansanna’s Priestess” while infusing the tune with synth solos and underscoring the grooves with a subtle yet sinewy hip-hop bump. Matthew Herbert splendidly deconstructs Michel Petrucciani’s solo rendition of “Caravan” into a Picassolike prism of fractured melodies, resulting in something that wouldn’t sound out of place on a Jason Moran disc.

Perhaps the most captivating remix on Revisited is by Masters at Work’s Kenny Dope. For his take on Bobby Hutcherson’s “La Malanga,” he initially reconfigures the song as an edgy hip-hop bounce interjected with gothic vocal yelps, before suddenly flipping it into a scintillating Latin-flavored house track, leaving Hutcherson’s electrifying marimba solo intact. “I wanted to give two sides of the song,” Dope says. “I want to keep the original entity of the song but still give it new flavor.”

Conceived by Blue Note’s A&R Director Eli Wolf and Nicholas Pflug, label manager for Blue Note France, with the help of musician manager Pedro Winter, Revisited boasts an international underground flava in which the obvious and kitsch are noticeably absent, resulting in the strongest jazz remix project yet. “We wanted a worldwide dream team with DJs from all of the continents,” Pflug says.

“It was really important that we picked people that really had a Blue Note sensibility in terms of musical artistry,” Wolf adds. “We really made a concerted effort of showing how much Blue Note has influenced electronica musicians around the world.”

The least-known persons on the stage on Oct. 29 at the Kodak Theatre in Hollywood were a trio of young trumpet players: Jean Gaze from … END_OF_DOCUMENT_TOKEN_TO_BE_REPLACED

There are important jazz musicians who are more talked and read about than actually heard, and one is Albert Ayler. He did not record extensively. … END_OF_DOCUMENT_TOKEN_TO_BE_REPLACED

There’s something about cities that have distinct musical traditions within them,” says Aaron Levinson, producer of The Harlem Experiment. “It’s not an accident.” With both … END_OF_DOCUMENT_TOKEN_TO_BE_REPLACED

Marchel Ivery, a tenor saxophonist based in the Dallas area, died in his hometown on October 30th after a short illness. He was 69. Although … END_OF_DOCUMENT_TOKEN_TO_BE_REPLACED