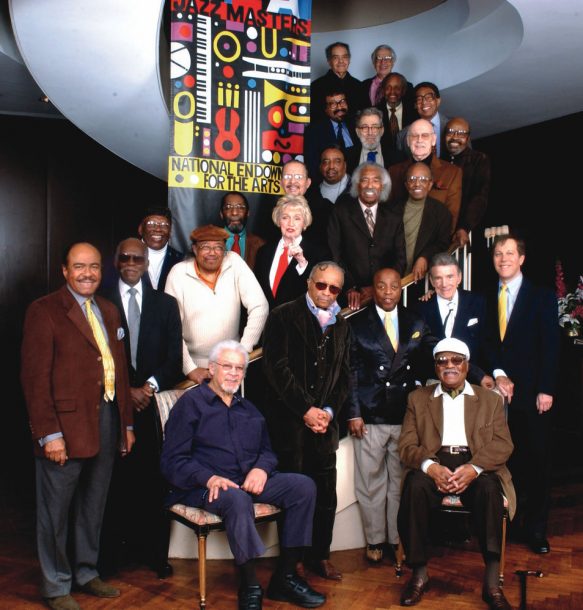 If jazz is a dying breed, you’d never have guessed it during the International Association for Jazz Education’s 31st Annual Conference in New York. Well, at least not at first glance.

Part jazz-education summit, part industry showcase and part professional caucus, the event drew a reported 8,000-plus attendees over the course of four days. They swarmed not one but two hotel complexes-the Hilton and the Sheraton-momentarily transforming a swatch of Midtown Manhattan into global Jazz Central. For those who live in New York year-round, the scene may have suggested a variation on Bizarro World: A clean, well-lighted place teeming with people who made easy eye contact, and who, if asked, could probably hum the first five notes of “Blue Train.”

But New York was more than just a setting for this conference, which had adopted the upbeat slogan of “Big Apple-Jazz to the Core.” The city’s network of nightclubs had braced for impact, bearing rosters stocked with heavy-hitters and record-release gigs. On Wednesday night, while an opening IAJE gala at the Sheraton saw awards bestowed upon the eminent Wynton Marsalis and George Wein, a more unbuttoned vibe prevailed across town. Greg Osby, debuting the touring ensemble from last year’s St. Louis Shoes (Blue Note), regaled the Jazz Standard with jazz standards.

For all intents and purposes, Thursday marked the first day of the conference, and there were stirrings well before IAJE Executive Director Bill McFarlin made his benediction at 2 p.m. “Going Mainstream: Jazz in the Non-Jazz Media” took place at 10 in the morning, and sounded an early note of hopelessness, as gatekeepers from CBS’ Sunday Morning and the Wall Street Journal frankly stated the disinterest with which their outlets regarded coverage of jazz. This unsurprising but still discouraging prognosis seemed to have little effect on the handful of aspiring writers who showed up an hour later for the first installment of “Who Asked You, Anyway?”-a three-part workshop on the fundamentals of jazz criticism moderated by two of the field’s stalwarts, Paul de Barros and Dan Ouellette, and featuring additional guidance from members of the Jazz Journalists Association. In the meantime, there were dozens of activities directed more toward the musician-in-training, such as a lecture on dominant-seventh embellishment with Jamey Aebersold or a study in clave with Brian Lynch.

The gap between jazz’s professional and educational concerns-between publicists/critics/artists and instructors/students-was diminished in the Hilton’s exhibit halls, which featured a maze of booths representing everything from XM Satellite Radio to D’Addario and Zildjian. And the dichotomy effectively disappeared at some of the conference’s evening concerts. At times, though, the crowds were unwieldy. Arriving on time for a Maria Schneider Orchestra concert at the Sheraton Imperial Ballroom, I found at least a hundred students waiting in the foyer. The 9,000-square-foot room was filled to capacity, and hotel staff stood sentry.

Fortunately there was other music to be heard just a short walk from the conference. At the Iridium, Pat Martino was leading the ensemble from Think Tank (Blue Note)-featuring Joe Lovano, who played with characteristic aplomb. A half-hour and a few blocks later, Birdland was packed to the rafters for the first of a three-night Marsalis Music label showcase. Alto saxophonist Miguel Zenon fronted his stellar quartet in a CD-release performance for Ceremonial (Marsalis Music), before yielding the stage to the muscular and ever-buoyant Branford Marsalis Quartet.

The following afternoon, Marsalis teamed with writer Bob Blumenthal for “Pardon the Musical Interruption”-reportedly one of the liveliest panels of the conference. I arrived just as the debate was dispersing, catching a whiff of postgame locker-room euphoria (or possibly just the odor of too many people caught in a room for two hours). I stayed in the room for the following session, which bore the promising title of “Meet the Jazz Fan.” Moderated by publicist Jana La Sorte and featuring mostly college-aged panelists culled from the conference, the discussion produced no revelations-but did elicit a memorable quote, from Brubeck Institute student Tommy Morimoto: “Jazz, to me, is like the universe: very wide, mysterious, dark, horrible, whatever.”

There was nothing dark or horrible about that evening’s NEA Jazz Masters Awards Ceremony, which saw honors bestowed upon Herbie Hancock, Jim Hall, Chico Hamilton, Nancy Wilson, Luther Henderson and Nat Hentoff. Held in the Hilton Grand Ballroom, the ceremony came complete with acceptance speeches, testimonials, video clips and concert performances by the likes of past honorees Dave Brubeck and Clark Terry. With its $25,000 inductee grant, coverage on BET Jazz and its own commemorative Verve compilation CD, this year’s NEA program demonstrated the extent of jazz’s current institutional support.

What went unsaid was the extent to which jazz survives outside of-and sometimes in spite of-such generous allocations. Walking from the Grand Ballroom to the Hilton lobby, conference-goers encountered the sound of the 14-year-old Italian alto saxophonist Francesco Cafiso, recipient of an “International Jazz Award” cosponsored by the IAJE and the International Jazz Festivals Organization. Arrangements had been made to feature Cafiso at the hotel bar with a rhythm section consisting of pianist James Williams, drummer Tony Reedus and bassist Ray Drummond, and the results were perfectly listenable. But the cutting-room floor is littered with former prodigies waylaid by their early promise. Cafiso’s future success will depend less on his $5,000 prize and summer festival tour than on his ability to grow into a complete musician-a goal often at odds with industry hype.

That topic surfaced at the panel moderated by Kurt Elling and featuring Charlie Hunter, Dave Douglas, Don Byron, Stefon Harris and Maria Schneider. This was the IAJE’s Grammy Soundtable-a fact made obvious by the presence of an enormous gramophone statue onstage, its horn pointed at Schneider’s left ear as if she were Nipper, the old RCA terrier. The panel was stocked with award-winners and poll-toppers-artists whose experiences both with and without major-label exposure provided ample fodder for a discussion about heeding the muse. The consensus, not surprisingly, was that the music has to be its own reward. “You can try and sell out all you want,” quipped Hunter at one point. “No one’s buying it today.”

Gallows humor aside, jazz’s big weekend reinforced the idea that the art continues to endure, to grow and evolve, despite whatever marginal spaces it may claim. Over 2,000 listeners turned up for the weekend’s final concert, which featured the Sisters in Jazz Collegiate All-Stars, Nicholas Payton’s Sonic Trance and the spit-and-polish Vanguard Jazz Orchestra. And at almost any given moment in the conference, a jazz fan could take his or her pick of clinics, workshops and performances-and still have the nagging feeling that somewhere, something important was being missed.

Strangely enough, though, my most encouraging IAJE moments occurred as I traveled the wind-swept corridor connecting Seventh Avenue and Sixth, one hotel to the next. It was in those solitary, interstitial minutes that the cacophony of the conference was replaced by reflection-on the rigors and attendant pleasures of this music that, for whatever reasons, we all love.

The least-known persons on the stage on Oct. 29 at the Kodak Theatre in Hollywood were a trio of young trumpet players: Jean Gaze from … END_OF_DOCUMENT_TOKEN_TO_BE_REPLACED

There are important jazz musicians who are more talked and read about than actually heard, and one is Albert Ayler. He did not record extensively. … END_OF_DOCUMENT_TOKEN_TO_BE_REPLACED

There’s something about cities that have distinct musical traditions within them,” says Aaron Levinson, producer of The Harlem Experiment. “It’s not an accident.” With both … END_OF_DOCUMENT_TOKEN_TO_BE_REPLACED

Marchel Ivery, a tenor saxophonist based in the Dallas area, died in his hometown on October 30th after a short illness. He was 69. Although … END_OF_DOCUMENT_TOKEN_TO_BE_REPLACED