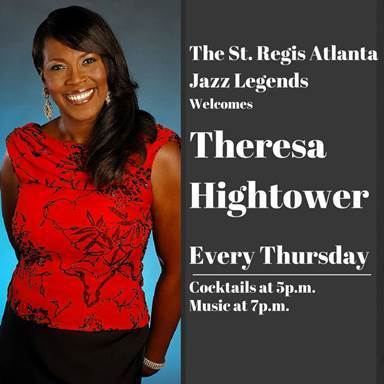 Launched back in April, the St. Regis Atlanta resort, located in Atlanta, Georgia’s Buckhead district, has been hosting its weekly Jazz Legends series every Thursday in its Wine Room from 7 p.m. to 10:30 p.m., featuring award-winning vocalist Theresa Hightower.

Throughout the jazz age, the St. Regis New York was host to such jazz greats as Count Basie and Duke Ellington, and the St. Regis Atlanta’s Jazz Legends series is “part of a St. Regis initiative [of] bringing jazz to its guests across the globe,” according to a press release.

Guitarist Pat Metheny will release a new album, SIDE-EYE NYC (V1.IV), on September 9, with tours of the U.S. and Europe to follow from fall … END_OF_DOCUMENT_TOKEN_TO_BE_REPLACED

Count the John F. Kennedy Center for the Performing Arts in Washington, D.C., as yet another large-scale organization that’s resuming its live jazz programming after … END_OF_DOCUMENT_TOKEN_TO_BE_REPLACED

The Savannah Music Festival has announced its official dates and formats for the 2021 edition of the festival. It will take place May 18-30, and … END_OF_DOCUMENT_TOKEN_TO_BE_REPLACED