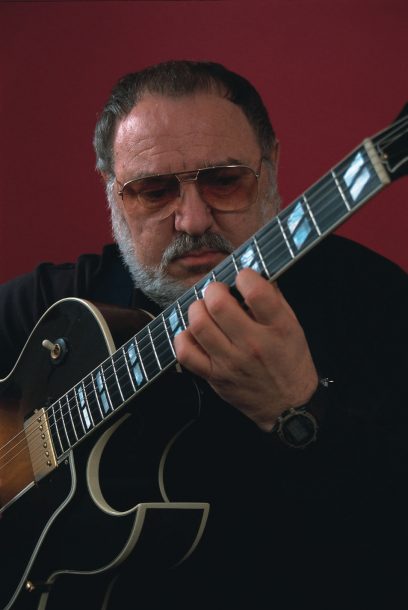 An array of jazz-guitar greats will join in New York City on Aug. 10 to celebrate the 80th birthday of guitarist Joe Diorio, in a tribute concert titled “Joe Diorio at 80.”

In a critically acclaimed career that has spanned more than 50 years, Diorio has recorded more than 20 albums as a leader and been featured with a number of revered artists on several more, including recordings by Sonny Stitt, Horace Silver, Anita O’Day and Sam Lazar. Diorio collaborated with Eddie Harris on six albums, including the well-received Exodus to Jazz (1961). Later that year he collaborated with Harris on Jazz for “Breakfast at Tiffany’s”, a jazz interpretation of the hit film’s score.

In the 1970s, Diorio joined trumpeter and bandleader Ira Sullivan on three albums: Ira Sullivan, Peace and Multimedia. “That was the best period of my life,” Diorio told JazzTimes, in a 2008 profile by Bill Milkowski. “We were doing everything from straight-ahead jazz to space-cadet stuff … total avant-garde. And we were so in tune with each other it was like telepathy, man.”

Diorio is also an educator, and has published several books and instructional videos. He has taught at the University of Southern California and the Guitar Institute of Technology. As Milkowski wrote, “Diorio is revered as a kind of six-string guru.”

More information on the concert can be found at intouchent.com and zincbar.com.

Like so many jazz festivals this year, New York’s avant-garde Vision Festival was canceled due to the pandemic. But its organizers, Arts for Art, didn’t … END_OF_DOCUMENT_TOKEN_TO_BE_REPLACED

As previously reported in JazzTimes, the National Endowment for the Arts, in collaboration with SFJAZZ, is hosting a special online-only concert on Thursday, August 20, … END_OF_DOCUMENT_TOKEN_TO_BE_REPLACED

UPDATE 4/10/20 1:55 PM: The listening session will only happen live on Zoom due to technical issues with Facebook. Thanks! As the old saying goes, … END_OF_DOCUMENT_TOKEN_TO_BE_REPLACED

Arts For Art (AFA), a New York City-based nonprofit organization for the promotion and advancement of avant-garde jazz, celebrates its 25th year of programming with … END_OF_DOCUMENT_TOKEN_TO_BE_REPLACED